Once, the mere mention of Raphael Sanzio’s name elicited swoons from prelates to princes, who ruthlessly vied over his artworks. Even the researchers and revolutionaries of the Enlightenment could be subdued by his gentle Madonnas and peaceful saints.

The great artistic renewals of the 17th, 18th, and 19th centuries looked to Raphael as an aesthetic North Star, but today, in our impoverished 21st century, the devout associate his name with an archangel, and the rest with a Teenage Mutant Ninja Turtle.

The year 2020 is a wonderful opportunity for the world to rediscover the artist who seduced three centuries of viewers, and to revive his qualities of harmony, balance, and gentleness. This, the 500th anniversary of the painter’s untimely death at age 37, will see exhibitions, academic conferences, and new restorations to celebrate the brief but impactful life of Raphael.

Whether visiting some of his works at national museums in Baltimore, Pasadena, Raleigh, Boston, New York, and the stunning collection in Washington, D.C.’s National Gallery, or a destination pilgrimage to see the major exhibit featuring more than 200 paintings that will open in Rome at the Scuderie del Quirinale March 5, this is a chance to be led into the new decade with a fresh look at art, faith, and life.

Raphael was a child prodigy, a disciplined worker, a delightful companion, and a generous employer. Men and women, popes and nobles, and even his own competitors treasured him. Born in 1483 in the small but sophisticated town of Urbino, Raphael’s father, painter Giovanni Sanzio, ensured that his son not only knew the tricks of the trade at an early age, but also was exposed to the vast variety of artistic styles that flourished in the cosmopolitan Montefeltro court. 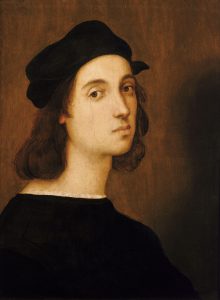 He grew up amid oil and fresco, miniaturists and muralists, and would evince a fearlessness toward new techniques and ideas for all of his short life.

His skills were furthered and fostered by great women of his age — Giovanna da Montefeltro, Duchess of Urbino, known as La Prefetessa, arranged his introduction to the exalted circles of Florence, and Atlanta Baglioni, of the ruling family of Perugia, commissioned the “Entombment” painting, which ultimately got Raphael his Rome audition for Pope Julius II.

By age 26, Raphael was decorating the throne room of Pope Julius II, one of the most powerful men of the era, with images of philosophy, theology, art, and law. This task would draw him into competition with Michelangelo, who was painting the Sistine Chapel a few feet away at the same time, and ignite a celebrity rivalry that would produce some of the greatest works in the history of art.

Therein lies the first lesson that this Renaissance painter can afford our times: Never fear competition.

Raphael didn’t balk at comparisons to Leonardo da Vinci, but welcomed them as he tried to master the elder painter’s facility with the technique of “sfumato,” the gentle softening of contours on a figure. Leonardo used the technique to create enigmatic effects, and Raphael adapted it to infuse his art with grace. 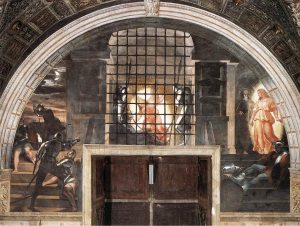 “The Liberation of St. Peter” in the Apostolic Palace, Vatican City, by Raphael, 1514. (Wikimedia Commons)

Michelangelo formed massive figures, isolated giants like the David or the Jonah of the Sistine Chapel; Raphael responded by creating drama with light and dark in “The Liberation of St. Peter.” When put unexpectedly in competition with a Venetian painter, Sebastiano del Piombo, Raphael, instead of rejecting the softer, color-forward style, learned from his rival.

Commissioned to produce drawings for tapestries that would hang under Michelangelo’s monumental Sistine ceiling, Raphael mastered this unfamiliar medium and produced arguably the greatest tapestry sequence in the world. Snark, envy, setbacks never brought him down, rather they spurred him to greater heights.

Raphael’s lifting up of those around him offers a second lesson for our age. By age 30 Raphael was running the equivalent of a Fortune 500 company. Yet despite his success, he found time to mentor his numerous assistants, many of whom would grow into brilliant artists in their own right.

Under Raphael’s tutelage, Giovanni da Udine rediscovered the secret of making stucco like the ancient Romans, Giulio Romano developed new types of perspective, and Perin del Vaga innovated the use of color. The recently restored Room of Constantine in the Vatican Museums, to be unveiled this spring, will reveal the daring creativity fostered by Raphael’s generosity. 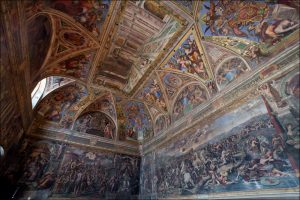 “The Room of Constantine” in the Vatican Museums. (Wikimedia Commons)

In the present age of name-calling and hot takes, of stridency and vulgarity, Raphael’s greatest legacy might be his gracefulness. In his art and in his life, he never tried to shock or upset, he brought out the beautiful in everything around him. His biographer, Giorgio Vasari, wrote, “At the sight of Raphael all bad humor died away, and every base and unworthy thought left.”

His enchanted imagination allowed him to see snippets of loveliness amid flawed creation, and he wove them deftly into his charming canvases. Art was no place to vaunt his own personal failings (Vasari suggests he had libertine tendencies), Raphael focused on the best in the world surrounding him.

He presented nature in an ordered fashion and then gently lifted the viewer’s gaze to the supernatural plane. His “Sistine Madonna,” who hovers effortlessly above two kneeling popes and two adorable angels, or his “Santa Cecelia,” disregarding the pleasures of this world while yearning for the joys of the next, reflect a peaceful spiritually, not a tormented wrestling match with faith.

This art calls for a quality that would behoove us all to cultivate in the coming year: contemplation. Raphael’s art is best absorbed in silence, much as its characters seem to move in quiet solemnity. A world that learned to look more carefully, that took time to appreciate nuance and that found joy in serenity, might start to resemble more Raphael’s “School of Athens” rather than Picasso’s “Guernica,” and would that be such a bad thing?