Augustine’s restless heart, and our own

In his latest book “On the Road with St. Augustine: A Real-World Spirituality for Restless Hearts” (Brazos Press, $19), James K.A. Smith offers a multifaceted reflection that intertwines his own life and the life of the African bishop from Hippo to illuminate the human experience.

This book is “a journey with Augustine as a journey into oneself. It’s a travelogue of the heart. It’s a road trip with a prodigal who’s already been where you think you need to go.” Smith offers a fresh and compelling portrait of St. Augustine, centered on the “Confessions” but informed by his letters, preaching, and other works, perhaps especially “On Christian Teaching.”

Interspersed are references from the philosophy of Martin Heidegger, the novel “On the Road” by Jack Kerouac, the memoir of Jay-Z, and the everyday life of Smith’s own family.

Augustine’s “Confessions,” in Smith’s understanding, is a retelling of the parable of the prodigal son who departs from his father’s house and who is welcomed home by the same father, who was keeping watch for him and who greets him with merciful love (Luke 15:11–32). The story of St. Augustine is also the story of every human person who searches for an identity, for freedom, for accomplishment, for enlightenment, and for true love with family and friends. “We are already Augustinian,” writes Smith, “we just didn’t know it.”

Perhaps nothing is more Augustinian than addiction. Smith articulates St. Augustine’s experience, which is an experience reenacted in countless troubled lives: “Insofar as I keep choosing to try to find that satisfaction in finite, created things — whether it’s sex or adoration or beauty or power — I’m going to be caught in a cycle where I’m more and more disappointed in those things and more and more dependent on those things.” Disordered use of freedom, the abuse of freedom, leads into “the claustrophobic crawl space of the self,” as Leslie Jamison puts it.

St. Augustine’s story also teaches us about evangelization. Smith writes, “Illumination depends upon trust: enlightenment is communal. It’s not that Augustine immediately comes to affirm the Catholic faith; rather, Ambrose’s kindness and hospitality to a precocious outsider was the affective condition for him to reconsider the faith he’s spurned. ‘I fell in love with him, as it were, not at first as a teacher of the truth — as I had no hope for that whatsoever in your church — but simply as a person who was kind to me.’ You can feel in this encounter something of the gratitude of the African outsider not being marginalized by an intellectual at the center of power.”

Love is a necessary condition for the possibility of evangelization. The words of faith become plausible after reception of the deeds of love. “It’s not just that reason needs love in order to know,” writes Smith. “I need to be loved into such knowing, welcomed into such believing, embraced for such hoping. If the arguments are going to change your mind, it’s only because an Ambrose welcomes you home.” 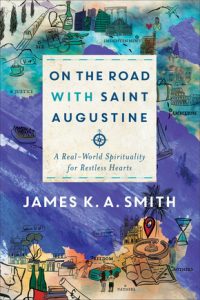 Perhaps the most deeply moving part of the book comes in its penultimate chapter. “To be comforted by the word of God’s grace,” writes Augustine, “is to return after a long journey to obtain from a father the kiss of love.” St. Augustine’s father, Patrick, was abusive, adulterous, and absent.

Smith writes, “Maybe this is what has drawn me to Augustine on an unconscious level: a shared longing for a father I’ve never known. I suspect I’m not alone in this. I know I’m not the only one whose father has left, whose stepfather left, who’s been left bereft of fathers despite their multiplication in serial marriages.” Smith hasn’t seen or heard from his father or his stepfather in decades.

“At the heart of the madness of the gospel is an almost unbelievable mystery that speaks to a deep human hunger only intensified by a generation of broken homes: to be seen and known and loved by a father.” The Christian story is “meeting a Father who adopts you, who chooses you, who sees you a long way off and comes running, and says, ‘I’ve been waiting for you.’ ” Smith sees in the Church, at its best, a family of brothers and sisters in Christ adopted by a loving Father.

But the journey does not end with adoption. We have not come to our final home as long as we walk on earth. This incompleteness is felt even by a saint. As Smith notes, “This is why book 10 of Augustine’s ‘Confessions’ is such a gift: it is the testimony of a broken bishop in the present. You realize Augustine isn’t just narrating past temptations he has escaped: he’s confessing all the ways he’s still tempted to camp out in alcoves of creation as if they were home. ‘I struggle every day,’ he admits, and I love him for doing so.”

If you love St. Augustine, if you love learning about the human condition, you’ll love this elegantly written book.