When a reporter once asked St. Pope John XXIII how many people worked at the Vatican, he responded, “About half.”

That punchline may soon go out of style if the findings of a recent public-policy poll are to be believed. According to the poll taken in June of this year, more than 7 million people refused an offer of employment. Many respondents had good reasons: child care, taking care of elderly family members, or chronic illness.

But just as many gave other reasons for saying no, such as: “The offer was unattractive to them economically, provided too few or too many hours of work, did not allow remote work, or was not in the ‘desired’ industry.”

Maybe I’m just old, but the above reason of “too many work hours” stuck in my aging “boomer” craw. If St. Paul had been surfing the net and found that poll, somebody would have been in for a severe tongue-lashing.

Everybody had day jobs in the Bible. Some were shepherds, farmers, tax collectors, kings and queens, fishermen; a couple were carpenters.

Taking all the mitigating circumstances into account, this poll demonstrates a substantial number of us would rather not work than take work we deem below our standards.

Not to go into the gory details, but I have held jobs that were highly esteemed, and jobs I had to do because, following other advice from Paul, I liked to eat. But my tribulations are nothing compared to what my greatest Catholic mentor went through.

I only knew my dad as a grocery store clerk in a little mom-and-pop grocery store (I told you I was a boomer) in the Valley. With 10 children to feed and clothe, waiting for the job that met his expectations was not a luxury he could afford.

In the 1950s, my dad took his father’s inheritance and bought his own grocery store in Simi Valley. With “only” nine children at the time, he had the luxury to work 14 hours a day, six days a week, trying to make a go of it. I’ve seen the newspaper clippings from the local Simi paper of my dad posing with some B-movie cowboy star as they hold a box of Tide laundry detergent, promoting the grand opening of the Big Tree Market. He had arrived. 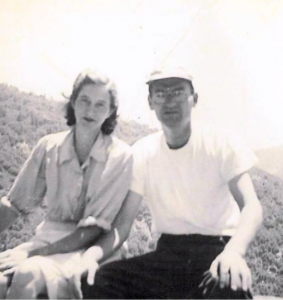 Roger and Helen Brennan in an undated photo while on vacation in what is today the Diocese of Fresno. (Brennan Family)

Unfortunately, Simi Valley in the 1950s was not the suburban sprawl it has since grown to be. There was no freeway connecting it to the greater population in the San Fernando Valley and there were not enough customers. After some very hard years of sweat and labor, the store went bust. My dad was broken in body and spirit. As his professional world crumbled at his feet, the news came from my mom that No. 10 was on the way.

My pop recovered from the twin shocks of losing his business and my birth and got back to work. He went from master of his own fate, independent entrepreneur to hourly wage-earning clerk in a local market. He was in his mid-40s, and he was just a grocery store clerk again. As bitter a pill to choke down that may have been, my dad kept to a very basic routine of getting up every day regardless how he felt and going to work. He repeated this process every day until he finally got too sick with cancer to continue.

For too long I think my dad did let his business failure darken his soul, maybe in the way some of the millions of people now turning down jobs are doing. If that’s the case, I pray they emerge from their doldrums and find the backup plan my father found.

Through the sacraments and the relentless storming of heaven with prayers by his wife, he finally realized that his true vocation was Catholic husband and father. He would not be defined by the job he did, but by who he was as a devout man, regardless of the job he had.

Sadly, I did not wind up the son of a rich man. Instead, I am heir to a greater legacy. When faced with professional disappointments or taking a job I’d hoped the world held in greater esteem, all I ever had to do was think about that grocer in the Valley and then I would know the plan of action: trust Jesus, ask St. Joseph and the Blessed Mother to intercede on my behalf, and just get up and go to work.