ROME — One problem with media coverage of global affairs is that many reporters and pundits don’t “speak religion,” which means it’s often easy for them to miss the significance of the religious subtext to whatever drama happens to be playing out.

Such is the case in Ukraine, with reporters often overplaying whatever Pope Francis says or doesn’t say about Vladimir Putin’s war, but sometimes vastly underplaying the significance of what he does or doesn’t do.

The best example right now is the pope’s announcement that he will consecrate Russia and Ukraine to the Immaculate Heart of Mary on March 25, joined by the bishops of the world and their priests. His top charitable aide, Polish Cardinal Konrad Krajeweski, will simultaneously perform the same act in the famed Marian shrine of Fátima.

It’s likely the boldest move Pope Francis has yet made with regard to the war, but to get that you need a bit of fluency in Catholic-speak.

It was in Fátima that on July 13, 1917, seers reported the Virgin Mary had told them that one day she would ask the pope, in concert with all the bishops of the world, to consecrate Russia to the Immaculate Heart.

“If my requests are heeded, Russia will be converted, and there will be peace; if not, she will spread her errors throughout the world, causing wars and persecutions of the Church,” the seers said Mary told them. “The good will be martyred; the Holy Father will have much to suffer; various nations will be annihilated.”

Twelve years later, the seers said the request had come through. Ever since, Fátima became a rallying point for Catholic hawks during the Cold War, who saw the Fátima messages as a prophecy of Soviet evil. For Pope Francis now to revive perhaps the most pointedly anti-Russian devotion of the Cold War era, therefore, is a fairly daring move — especially because, while the mainstream media may not quite get it, the Russian Orthodox certainly do.

One day after the Vatican announcement, Patriarch Kirill of Moscow, spiritual leader of the world’s roughly 110 million Russian Orthodox, published his own Marian initiative, calling on his followers to pray for peace during Lent to Mary as the “Theotokos,” usually rendered into English as “Mother of God.” 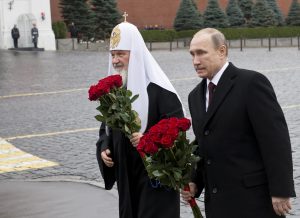 Russian Orthodox Patriarch Kirill of Moscow and Russian President Vladimir Putin walk to place flowers at a monument to Minin and Pozharsky, the leaders of a 1612 liberation struggle against foreign invaders, on National Unity Day in Red Square in Moscow in this Nov. 4, 2015, file photo. A group of Orthodox theologians have issued a statement condemning Patriarch Kirill's support of the war in Ukraine. (CNS photo/Natalia Kolesnikova, Reuters pool)

(A friend and colleague in the Vatican press corps actually anticipated this, saying immediately after the Vatican announcement that Patriarch Kirill could perform his own rival consecration praying for the conversion of NATO. Given that Patriarch Kirill has increasingly been issuing pro-Putin statements, I joked that maybe he could get Syria, Serbia, and other Kremlin allies to join in, and we could call it the “Pan-Pariah Synod.”)

Pope Francis’ decision came in response to a request from the Latin-rite bishops of Ukraine, posted on their website March 2.

“We humbly ask Your Holiness to publicly perform the act of consecration to the Immaculate Heart of Mary of Ukraine and Russia, as requested by the Blessed Virgin in Fátima,” the bishops wrote.

Other popes have attempted to fulfill Mary’s request, though many Fátima devotees regard all of them as unsatisfactory. In 1942, Ven. Pope Pius XII consecrated the whole world to the Immaculate Heart, which obviously includes Russia, but the country wasn’t singled out.

Moreover, his act of consecration wasn’t joined by all the bishops of the world in keeping with the Fátima request. The same objections have been leveled about consecrations to the Immaculate Heart by St. Pope Paul VI in 1964 and St. John Paul II in 1984. They continue to make the rounds, despite the fact that Sister Lucia, one of the Fátima visionaries, said in 1989 that Pope John Paul’s consecration satisfied Mary’s request.

No doubt about it, many Fátima devotees will make similar objections this time. Mary wanted Russia consecrated, they will say, not Russia and Ukraine, which conflates a nation in need of conversion with one suffering an unjust war.

Father Antonio Spadaro, SJ, perhaps the pope’s closest adviser, immediately took to Twitter to respond, saying that including both Russia and Ukraine “rebukes every form of ‘Gott mitt uns,’ reaffirming the non-nationalistic vision of the Christian faith.” [“Got mitt uns,” meaning “God is with us,” was a phrase worn on German uniforms and armor from the time of the Prussian Empire to World War II, and is often associated with the Nazi era.]

“Every consecration of one army against another sounds spurious and blasphemous,” Father Spadaro wrote.

That hasn’t satisfied critics, who also object that the consecration still is not being carried out in concert with all the bishops of the world. 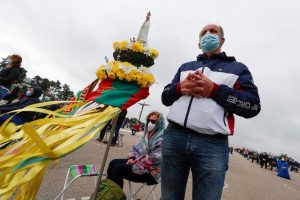 Pilgrims pray on marked circles to maintain social distance May 13, 2021, at the Marian shrine of Fatima in central Portugal. Thousands of pilgrims arrived at the shrine to attend the 104th anniversary of the first apparition of Mary to three shepherd children. (CNS photo/Pedro Nunes, Reuters)

These complaints come on top of the basic fact that many of the strongest Fátima devotees aren’t big Pope Francis fans anyway. The popular traditional blog “Novus Ordo Watch,” for instance, described its reaction to the Vatican announcement with the phrase “Whoop De Doo,” and went on to assert baldly that because Mary asked “the pope” to make the consecration, and because Pope Francis quite obviously isn’t a legitimate pope, the effort is invalid from the get-go.

None of that nuance likely will mean much to the typical Russian Orthodox observer. In all probability, they’ll simply see the pope of Rome dusting off a Cold War relic to antagonize Russia, thus revealing himself as the chaplain of NATO. You can be sure that’s how the consecration is likely to be spun by Russian state media, for example.

However Marianists themselves will assess the act, therefore, it’s at least worth including the consecration when we evaluate exactly how “bold” Pope Francis has been willing to be. Yes, he still hasn’t denounced Putin by name — but he is apparently willing to risk poking the Russian bear in a spiritual language both sides understand, even if we in the media sometimes don’t.