ROME – Popes, like leaders of any sort, have to pick their battles. What does it tell us, then, that so far Pope Francis has chosen to fire a metaphorical shot across the bow in the controversy over Hagia Sophia, but not really to join the fight?

Hagia Sophia, of course, is the storied basilica in Istanbul which functioned as a Byzantine Christian place of worship for almost a millennium, then as an Islamic mosque after the Ottoman conquest of Turkey in 1453, and finally as a museum with the dawn of Turkey’s secular republic under Kemal Atatürk in 1934.

Now it’s once again a mosque, following a decision to revise its status again by Turkey’s nationalist and, increasingly, Islamic government under President Recep Erdoğan. A lavish July 24 ceremony was organized around the first Friday prayers to be held in Hagia Sophia in nearly a century, with Erdoğan prominently in attendance.

That decision to change the status of the basilica has brought protest from Orthodox Christians, including the Patriarchate of Constantinople whose headquarters are in Istanbul. Patriarch Bartholomew said Hagia Sophia belongs to all humanity, not just those who happen to control it at the moment.

Opposition also came from leaders of other Christian churches, religious freedom advocates and art historians and conservators alarmed about the fate of the icons and other images in the basilica banned in mosques and thus covered up. Even UNESCO objected, noting that Hagia Sophia is on its world heritage list as a museum and that Turkey is bound to ensure “no modification is made to the outstanding universal value of the property.”

On July 12, Pope Francis made his own concern clear, stating during a Sunday Angelus address that he was “very pained” over the situation.

Yet since that time, however, there’s been no concerted push from the Vatican over Hagia Sophia. The pope hasn’t spoken about it again, the Vatican’s Secretariat of State hasn’t issued any communiqué, senior Vatican officials haven’t given interviews on the subject, the papal ambassador in Turkey has not been recalled, and in general there’s no sign of the full-court press of which the Vatican is capable when it’s locked in on something.

One of the few comments from anyone even vaguely related to the Vatican came from Jesuit Father Felix Körner, a German theologian who teaches the theology of religions at Rome’s Gregorian University and is a consultor to the Vatican’s Pontifical Council for Interreligious Dialogue.

In a July 13 interview, the day after Francis’s Angelus address, Körner told Cologne’s Catholic radio service that while the decision to revert the basilica into a mosque is “annoying” because it’s being done for political reasons, there’s nothing to get terribly worked up over, since over the centuries mosques and churches have changed status often depending on who was in charge. He offered the example of an historic mosque in Córdoba, Spain, which he said was converted into “a Gothic cathedral of mediocre artistic quality” during the Reconquista. 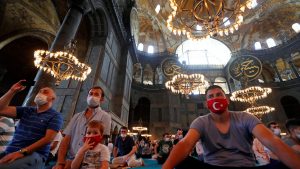 Worshippers attend afternoon prayer at Hagia Sophia Grand Mosque in Istanbul July 26, 2020. Hagia Sophia was built as an Orthodox Christian cathedral and stood as the seat of Eastern Christianity for a thousand years before Ottoman Turks conquered its host city and turned it into a mosque in 1453. In 1934, it was designated as a museum revered as a symbol of Christian and Muslim unity until being transformed into a mosque this July. (CNS photo/Murad Sezer, Reuters)

Moreover, Körner said, religious believers should at least be glad there will once again be prayers in Hagia Sophia after 86 years as a secular museum.

The relative sang-froid comes despite the fact that several parties, including President Katerina Sakellaropoulou of Greece, have asked the Vatican to turn up the heat. Sakellaropoulou appealed to Francis to use “all his influence on international public opinion” to cajole Erdoğan into walking back the decision.

Pope Francis didn’t even take the obvious opportunity created by Erdoğan publicly inviting him to the July 24 reopening ceremony to say something along the lines of, “Thanks, but no thanks.”

In part, Pope Francis undoubtedly is aware of the possibility of unintended consequences. A recent poll showed that 70 percent of Turks support turning Hagia Sophia back into a mosque, and a time when the national economy is slumping ahead of possible snap elections next year. In that context, Erdoğan needed to rally his nationalist and Islamic base – and drawing fire from the pope could actually help him in that regard, meaning that Francis would actually be playing into Erdoğan’s hand.

(The political nature of the whole thing was also clear from the fact that Erdoğan chose July 24th for the reopening, which is the anniversary of the Treaty of Lausanne that established the borders of modern Turkey. Erdoğan resents the fact the treaty ceded the Aegean Islands to Greece, and this was his way of reclaiming the date for national pride rather than shame.)

In part, Francis may not have wanted to be associated with other world leaders making the most noise over Hagia Sophia, who themselves appear to be doing so for equally political reasons. When President Bashar al-Assad, for instance, announced plans to build a replica of Hagia Sophia in Syria with the backing of Russian President Vladimir Putin, it was hard for most observers to believe either man was acting out of religious fervor.

Francis may also have an ecumenical motive for restraint, believing that if anyone ought to be the face and voice of Christian anxiety over Hagia Sophia, that role naturally belongs to Bartholomew rather than him. In addition, Francis is generally an advocate of dialogue in relations with Islam, and he may not want to set back momentum created by a “Document on Human Fraternity” he signed with the Grand Imam of Al-Azhar in Abu Dhabi in February 2019.

Finally, Francis may also be turned off by some of the Western voices leading the push over Hagia Sophia, since they tend to be the same hawks and culture warriors he clearly distrusts on other fronts. (It doesn’t help that the leader of Italy’s far-right and anti-immigrant party, Matteo Salvini, staged a demonstration in front of the Turkish consulate shouting “Hands off Hagia Sophia,” warning that if we don’t draw the line, soon the Cathedral of Milan might also be a mosque.)

Whatever the explanation, for now Pope Francis appears content to be part of the supporting cast over Hagia Sophia rather than playing the lead role. Time will tell whether that proves to be admirable restraint, or a missed opportunity.