If you want to know how it was possible that they saved 417 fewer people than they could have on the Titanic, just go to a supermarket today. People just don’t listen, and when the fight or flight survival mechanism kicks in, things get crazy and you wind up with half-filled lifeboats and toilet paper aisles that look like the set decoration for a post-apocalyptic Charlton Heston movie from the 1970s, where the only thing missing is the talking monkeys.

The Titanic was also a case of every “rich” man for himself as more first-class male passengers survived the sinking of the world’s largest metaphor than third-class children.

With the coronavirus (COVID-19) news — all bad — changing for the worst on an hourly basis, the one constant in the news seems to be how thin the line is between civil behavior and mayhem. The only human behavior that seems to be making news is bad behavior, and if we aren’t careful, we could all lose our faith in humanity.

There are no coincidences, and the reading from last Sunday’s Mass from the book of Exodus shows that Moses knew all about this mentality as well. The people were beginning to grumble, they were thirsty and they started looking for the nearest oasis where they could hoard some bottled well water. …Moses was at his wits end. Somehow God was not.

So, God makes water come forth from a rock and everything is great, until Moses spends more time than is comfortable up on Mt. Sinai and before you know it, there’s a golden calf being danced around.

I think it is irrefutable evidence that Charles Darwin was wrong when we consider we’ve gone from worshiping a golden calf to bowing down before a tower of 2-ply moisturized tissue paper.

We are so quick to panic, and some of us are quick on making a buck, as two entrepreneurial brothers showcased. They drove more than a thousand miles through Kentucky and Tennessee grabbing every ounce of hand sanitizer they could find. Their final tally was more than 17,000 bottles of the stuff and they attempted to sell them on Amazon at prices that would make Ebenezer Scrooge blanch.

Fortunately, the same technology that makes it possible for greedy profiteers to sell their wares instantly and across the world also brings with it outrage, and the brothers have now decided to donate their supply of hand sanitizer. The fact that the local authorities were looking into the matter may or may not have had an influence on their newfound philanthropy.

We are in for the long haul with this medical crisis, and I am sure there will be more stories like this and stories about people fighting over cans of tuna. Things will settle down and some time in the future we will meander back into more normalcy until the next crisis.

It does make one wonder what God sees in us. Why does he exhibit such patience with us and why did he go to all the trouble to rescue us from sin, when we are so prone to take that gift for granted or throw it out altogether the minute times get tough? In short, why hasn’t God lost his faith in humanity? 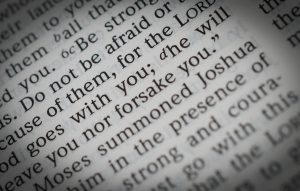 Close-up of the Bible verse Deuteronomy 31:6, "Do not be afraid." (Jennifer Wallace/Shutterstock)

And now, we are without the Mass. Here in Southern California, confession is still available to us, but not the Eucharist. Sadly, no one will be storming a locked church demanding entrance as if there was a pallet full of newly delivered Charmin inside.

So we may have to do a little home spiritual care. I know this is always a challenge with us Catholics, but we could actually open that Bible on the bookshelf, you know the book, the one you got for a wedding present, or a graduation present, or confirmation, with the spine that isn’t creased. Now we can take advantage of another feature the Bible holds: It can be read, too.

And if we take the plunge (we’ll have some free time on Sundays for the foreseeable future), we’ll find there is one phrase that pops up over and over in both the Old and New Testaments.

Somebody actually counted and found “Do not be afraid” appears 365 times in Scripture. We obviously need constant reminding. For now, we aren’t going to get those reminders from attending Mass. But with a little effort and a lot of prayer, we can show God his patience in us is not misplaced.