ROME — Last weekend marked the one-year anniversary of arguably the most important single moment to date in the Catholic Church’s efforts to come to grips with the clerical sexual abuse scandals, when Pope Francis summoned the presidents of all the bishops’ conferences of the world to try to promote a comprehensive global approach.

One measure of the significance of the event is that it has its own Wikipedia page, a level of cultural relevance that precious few Vatican happenings ever achieve.

No pontiff had ever convened such a high-level summit dedicated to the abuse scandals before: 114 presidents of bishops’ conferences, 14 leaders of Eastern Catholic Churches, 22 superiors of men and women religious, 14 members of the Vatican Curia, and 15 additional bishops and cardinals, as well as some male and female religious and other invited participants.

The themes of the Feb. 21-24, 2019, assembly were responsibility, accountability, and transparency.

The event swiftly produced fruit: By May, Pope Francis had issued “Vos Estis Lux Mundi” (“You are the Light of the World”), a “motu proprio” (“on his own impulse”) establishing new reporting requirements for both the crime and the cover-up of sexual abuse as a way of trying to ensure that bishops and other superiors in the Church are held accountable.

Seven months later, Pope Francis also eliminated the requirement of pontifical secrecy in clerical abuse cases, which theoretically should make collaboration with civil prosecutions easier and also enhance the ability of survivors to access information about the status of their complaints and any canonical procedures that result.

On this one-year milestone, many of the same groups of survivors and their advocates who descended on Rome last February are here again, offering their analyses of what’s been accomplished and what remains to be done. Every day this week, those groups are holding press conferences and other events in Rome, trying to draw attention to the cause.

Here’s a basic summary of where things stand.

To begin with, it’s become clear over the past year, if it wasn’t before, that the Catholic Church is hardly the only institution that’s failed to handle the scourge of child sexual abuse responsibly. Just in the past week, the Boy Scouts of America were forced to file for bankruptcy protection in the face of a tidal wave of lawsuits related to abuse claims.

Obviously that’s no excuse for the Church’s failures, but it is a reminder that the roots of those failures may be less about the specifics of clerical or ecclesiastical culture and more about broader organizational dynamics.

It’s also become clear over the past year which types of reforms Pope Francis seems prepared to embrace to combat clerical abuse, and which he’s not.

During a Rome news conference Feb. 17, Anne Barrett Doyle of the U.S.-based group Bishop Accountability, observed that the phrase “zero tolerance” has disappeared from Pope Francis’ vocabulary with regard to the abuse crisis, and there’s been no movement toward making the American understanding of “zero tolerance” — meaning permanent removal from ministry for one substantiated charge of abuse of a minor, and ordinarily laicization — the global policy of the Catholic Church.

That reality is probably the No. 1 complaint of survivors’ groups on the summit anniversary, and there will be rallies and protests this week calling on the pope to embrace the idea that any cleric who abuses, or any bishop or superior who covers it up, ought to be out of work.

On the other hand, Pope Francis has embraced other planks of the program put forward by many reformers, including ending pontifical secrecy and creating a mechanism for dealing with allegations of mishandling complaints by bishops. 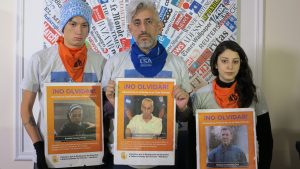 Ezequiel Villalonga, Daniel Sgardelis and Claudia Labeguerie, survivors of sexual abuse at schools for the deaf in Argentina, pose at a news conference Rome Feb. 20, 2020. The survivors were in Rome after a recent visit to Geneva, where they informed the U.N. Committee Against Torture about the sufferings they endured at both Catholic schools.(CNS photo/Junno Arocho Esteves)

The issue now, in the eyes of some observers, is enforcement. Suppose the new reporting systems envisioned by Vos Estis are created, a bishop is accused of cover-up, and an investigation finds the charge substantiated. What then?

The fact that the answers to that question are still speculative frustrates many reformers, who are wondering why it’s taking so long to deliver the new culture of accountability that last year’s summit was supposed to inaugurate.

The summit was intended also to promote transparency, and too many observers see question marks where they had hoped to find exclamation points. The central example is the case of ex-cardinal and ex-priest Theodore McCarrick, who’s been accused of a variety of forms of misconduct and abuse since charges initially surfaced publicly in the summer of 2018.

Though McCarrick was swiftly punished for his own behavior, the question left hanging is how he was able to remain at the pinnacle of power in the Church for two decades despite persistent rumors that something was amiss.

On Oct. 6, 2018, the Vatican issued a statement saying that Pope Francis had ordered a thorough review of Vatican files on McCarrick, promising that the results would be made known “in due course.”

Although Vatican personnel say the report is close to being ready, to date it hasn’t been issued, and hence it’s impossible to assess whether it delivers the full disclosure that was promised in that statement almost 18 months ago. Until that happens, it will be difficult to persuade skeptics that the last word on the McCarrick scandal has been spoken.

One could point to other open questions, for instance, the pope’s handling of the case of Bishop Gustavo Zanchetta, an Argentinian prelate whom Pope Francis brought to Rome and assigned a key position in the Vatican’s financial apparatus even as charges of sexual and financial misconduct were emerging in his home country.

One could also point to the pope’s response to Chile, where Pope Francis has yet to take any public action against two former cardinal-archbishops of Santiago, who presided over a massive abuse crisis and whose records have come in for fierce criticism.

The bottom line would appear to be this: One year on from his historic summit on clerical abuse, Pope Francis is drawing good reviews for some aspects of his reform campaign, but many observers and activists also believe the pontiff has miles to go before he can sleep.