What’s in a last name?

That is the question. It can determine what private school you attend, and what college you graduate from. It can influence the job you land, and the opportunities you have. It can help you get elected to office, or nab a union factory job. And it can shape what you inherit, as opposed to what others are trying to merit.

Nepotism has never been a part of my life. You don’t have much of a “hook” to get what you want when you’re the son of a cop and the grandson of a farmworker.

Just as well. Today, nepotism is whipping up a world of trouble. It helped start an impeachment process, pit one party against another, and divide the country.

President Trump asked the President of Ukraine to investigate Hunter Biden, the son of former Vice President Joe Biden. Trump thinks it’s fishy that Hunter was appointed to the board of a Ukrainian oil and gas company and paid $50,000 per month despite the fact that he did not know much about Ukraine, oil, or gas.

Trump is claiming nepotism. He ought to know. Unlike me, he is an expert on the subject.

His father helped set him up in business and left him a hefty inheritance. His daughter, Ivanka, followed him into the Wharton School at the University of Pennsylvania. His sons, Eric and Donald Jr., run the family business in New York, where they make lucrative deals all over the world, no doubt helped along by the fact that their father is president of the United States. 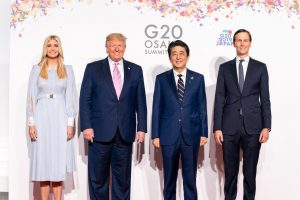 Nepotism is as American as apple pie.

In the United States, this land of rugged individualism, there have always been those who were, as the saying goes, born on third base but act like they hit a triple.

You could start with John Quincy Adams, who, in 1825, became the sixth president of the United States and whose father, John Adams, was No. 2. Both went to Harvard.

Then there was President Franklin Delano Roosevelt, who graduated from Harvard where his father, James, went to law school. Franklin came from money, and the wealthy members of his social class tagged him a traitor for pushing through the New Deal.

Another Harvard graduate, John F. Kennedy, would become president in 1960 thanks to a campaign that was said to be buoyed by his father’s war chest. A businessman and former ambassador to Great Britain, Joseph Kennedy Sr. also went to Harvard.

When the Vietnam War came, the lyrics of the song “Fortunate Son” Creedence Clearwater Revival captured the anger of a generation: “It ain’t me. It ain’t me. I ain’t no senator’s son…”

Beginning in the 1970s, women and people of color began to break down doors and got their turn to pass on to their children the fruits of their labor.

In 2000, Al Gore (son of a U.S. senator) and George W. Bush (son of a former U.S. president) squared off for the presidency, and Bush won. Gore’s three daughters went to Harvard, as did their father. Bush’s daughter, Barbara, attended Yale, as did her father, grandfather, and great-grandfather.

These selective universities — and others like them — represent the private club that celebrities and other wealthy parents tried to bribe their way into as part of what the FBI called “Operation Varsity Blues.”

The college admissions cheating scandal is what happens when parents decide to stage a hostile takeover of their children’s lives. These aren’t just helicopter parents who hover above their children. These are take-the-wheel parents who jump in the driver’s seat and commandeer the vehicle.

These are cautionary tales for those of us who are parents of young children. We all want what’s best for our kids. But, sometimes, what’s best for all concerned is to take a hands-off approach. Let them fail, make mistakes, get rejected, and come up short. That’s how they learn.

A reporter for ABC News asked Hunter Biden if he thought he would have been given the lucrative opportunity in Ukraine if his last name wasn’t Biden. He was honest.

“I don’t know,” he said. “Probably not, in retrospect. But that’s, you know, I don’t think that there’s a lot of things that would have happened in my life if my last name wasn’t Biden."

It was the saddest thing I’ve heard in a long time.

Ruben Navarrette is a syndicated columnist with The Washington Post Writers Group, a columnist for the Daily Beast, and host of the podcast “Navarrette Nation.”