Whatever happens, we haven’t seen the last of Cardinal George Pell

ROME — Now that Cardinal George Pell is a free man after more than 400 days in prison on charges of “historical sexual offenses,” which he denied vigorously from the beginning and for which he was eventually acquitted by Australia’s High Court, the question arises of what’s next for the 78-year-old prelate.

Immediately, Cardinal Pell’s legal odyssey may not be over. Vivian Waller, who served as legal counsel for the alleged victim in the Cardinal Pell case, has said she has at least eight other civil claims ready to go against the prelate, claiming he either engaged in sexual abuse or covered up abuse committed by others.

There are also reports that police in Australia’s state of Victoria are investigating a separate charge of abuse that dates back to the 1970s, when Cardinal Pell was a priest in his hometown of Ballarat. It’s possible the investigation could lead to a new indictment.

Assuming some of those claims go forward, Cardinal Pell no doubt will defend himself vigorously. While some have raised the possibility that he could return to Rome on his Vatican passport and invoke sovereign immunity, that’s never been his style.

In the meantime, Cardinal George Pell is a free man. It’s probably not in the cards that he’ll go back to a senior position in the Vatican. When his term as secretary of the Secretariat for the Economy expired in February 2019, a Vatican spokesman confirmed he no longer held the role, and, given his age, he likely won’t be tapped for another.

In all likelihood, whatever informal role Cardinal Pell plays from here on will be something he carves out for himself. In an April 14 interview with Sky News Australia, he said that for now he wants a quiet life of growing roses and cabbage, but given his dynamic personality, he’ll undoubtedly end up doing more than puttering in the garden.

Some hints can be gleaned from statements since his release. In a piece for The Australian published on Good Friday, he linked his own experiences to the coronavirus (COVID-19) as part of a meditation on suffering.

“I have just spent 13 months in jail for a crime I didn’t commit, one disappointment after another,” he wrote.

“I knew God was with me, but I didn’t know what he was up to, although I realized he has left all of us free,” Cardinal Pell wrote. “But with every blow it was a consolation to know I could offer it to God for some good purpose, like turning the mass of suffering into spiritual energy.” 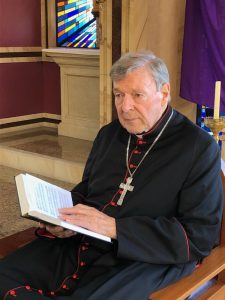 Cardinal George Pell at the Seminary of the Good Shepherd near Sydney a few days after Australia's High Court overturned his conviction April 7, 2020.

He struck a similar note in a brief video message for Easter that Cardinal Pell sent to his friends in Italy, among other things saying he was thinking of all those who have died amid the pandemic, especially “many priests.”

As of Easter Sunday, at least 100 priests had died in Italy due to the coronavirus.

“For those of us who go on living, let us draw new strength and comfort from the Risen Lord,” the cardinal said. “How close he is to all those who suffer, to those sick and in pain, to those falsely accused, and particularly to those who are alone. Lean on him. Draw close to him. For the Lord, there is no such thing as social distancing. He is looking for you.”

Such language suggests Cardinal Pell could have a good deal to say about the theology and spirituality of suffering.

Toward the end of his life, the late Vietnamese Cardinal Francis Xavier Nguyen Van Thuan published a book titled “The Road of Hope: A Gospel from Prison,” based on his 13 years in a Communist jail in his native country, nine of them in solitary confinement. It’s considered one of the finest pieces of spiritual writing by a Catholic prelate in recent memory, and it’s possible Cardinal Pell might consider writing something similar.

Cardinal Pell has already released portions of a diary he kept while in prison, which, among other things, reveal a remarkable sangfroid about his situation: “I had a shower, a toilet, and a bed with a firm base. What else does a man need?” He could choose to expand on these scattered notes, turning them into a memoir.

Cardinal Pell also could become a roving ambassador for prison ministry. It’s a cause close to the heart of Pope Francis, who’s used his daily livestreamed Masses during the coronavirus lockdown on several occasions to recall the special isolation of inmates during this period and also to call for reform on issues such as prison overcrowding.

In that interview with Sky News Australia, Cardinal Pell said his time in prison had given him an interest in people who are “wrongly condemned.” He talked about becoming friends with a man convicted of murder, but whom Cardinal Pell believes to be innocent.

It’s difficult to imagine anyone at the senior levels of the Catholic Church today who’d have a better existential grasp of the emotional and spiritual dynamics facing people behind bars than Cardinal Pell, based on such experiences.

It’s also possible Cardinal Pell could choose to play a role in the Church’s ongoing efforts at reform over the clerical sexual abuse scandals, since few people can understand the visceral anger such abuse elicits like a man who, for all intents and purposes, became the poster boy for everything many Australians considered to be wrong.

Cardinal Pell’s always been proud of his early efforts as the archbishop of Melbourne to deal with the abuse scandals, and mentioned it again in the Sky News interview with longtime defender Andrew Bolt: “I think it’s a bit ironic that I’m the figurehead, the scapegoat that has copped most of this because what I did very early in 1996 is set up the Melbourne response,” he said.

Becoming an advocate on child abuse reform might be delicate, since many survivors still have a negative view of Cardinal Pell, but the possibility of blowback has never stopped him from speaking out before when he believes something important is at stake.

More broadly, he could return to being a commentator on public affairs. For years he wrote a popular column for Sydney’s “The Sunday Telegraph,” and he’s an agile TV personality. He’s not afraid to take controversial positions on sensitive issues, which makes him media gold, and he’s convinced the voice of faith has a right to be heard even in the heart of secular culture.

Whatever happens, Cardinal Pell won’t go quietly into that good night. He’s been a battler from his youth as a scrappy ruckman and potential pro in Australian Rules Football, and it’s not in his nature to give up.

It’s a safe bet, therefore, that we haven’t seen the last of Cardinal Pell, one of the most remarkable and fascinating personalities the Catholic Church has ever produced, and given the long, rollicking history we’re talking about, that’s saying something indeed.