The nuns who prove the 'The Handmaid's Tale' wrong

The Hulu series “The Handmaid’s Tale” has won many awards and high praise from all the right kind of people. This story of a dystopian world where religious fanaticism reigns supreme and women are subjugated by a crushing patriarchal system checks all the boxes for the people who write, produce, star, and critique “important” works of entertainment.

The costuming in this series has infiltrated pop culture in general, becoming a mainstay of a variety of protest marches. I’m sure this Halloween there will be plenty of adults masquerading in the same red dresses and strange white bonnets that bear an uncanny resemblance to religious garb.

I do not think for a minute that the writers, producers, and stars of series such as these believe women who still wear religious habits are somehow current-day victims of a patriarchal system and live suppressed and repressed lives.

They probably never visited the Carmelite Sisters of the Sacred Heart in Los Angeles. 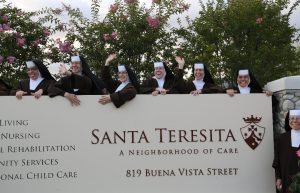 Before I go any further, let me stipulate my bias. I have known about the sisters for a long time. Their elderly care facility “the manor,” on the Santa Teresita campus in Duarte, is where my mother spent her last years.

She had been robbed of everything but her physical health due to the ravages of Alzheimer’s, and it was at Santa Teresita she received the compassionate and loving care not only from the sisters, but from the equally dedicated staff.

The first thing you will notice when you visit the sisters either at their Santa Teresita facility or their retreat house in Alhambra is how joyful they are, how expressive they are for their love of Christ, his Church, and for all the souls they feel privileged to minister to.

With a charism that includes education of children, caring for the sick, and facilitating spiritual journeys of lay men and women, these sisters, more than 100 in the order, teach in a few archdiocesan schools, run a true oasis of a retreat center, and do God’s work (I’ve seen it first hand) by caring for the sick and elderly.

They have recently undergone a major construction campaign at Santa Teresita and now have 44 beautiful new apartments, providing independent housing for seniors living in a true communal sense, with access to the sacraments, social interaction with their neighbors, and all done under the tender and watchful care of the sisters.

In a time where most college students cannot tell you who is buried in Grant’s tomb, fewer people still are aware of how terrible things were in the not-so-distant past when this religious order first came to Los Angeles.

Like a lot of things in Los Angeles, it began in Mexico. It was the time of the Mexican Revolution in the early 1900s when the founder of the Carmelite Sisters of the Sacred Heart, Mother Maria Luisa Josefa, made the perilous journey through her homeland to get to the United States.

This sojourn was all the more dangerous due to the rabid anti-Catholicism of the new Mexican revolutionary government. Priests and religious men and women were being arrested; in many cases they were executed for the crime of wearing Roman collars and religious habits.

So as the fictional women in “The Handmaid’s Tale” are forced to wear their garb, the real religious women of Mexico were threatened with death for wearing theirs. Traveling incognito with a few other sisters, Mother Maria made it to Los Angeles in 1927, and the story of the Carmelite Sisters in the archdiocese began. 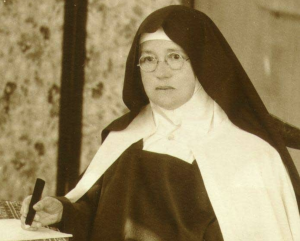 It’s one of the great myths transported by the vehicle of popular culture since the days when many religious orders stopped wearing formal habits, that those orders that retained their traditional habits were somehow desperately clinging to the past.

It’s why, to the creators of the HBO show “The Handmaid’s Tale,” this kind of “costuming” is used to constitute repression, rigidity, and the stifling of individuality.

In preparation for this piece, I recently visited the Carmelite Sisters both at their retreat center and at Santa Teresita. I found a collection of women from diverse backgrounds with different gifts, different talents and backgrounds as diverse as if you threw a dart at a map of the United States while blindfolded — women from ranches in South Dakota, farms in Minnesota, and the bayous of Louisiana. They pray together, work together, and live together in purposeful community.

To the “outside” world it seems like the embodiment of the fictional world of “The Handmaid’s Tale.” The truth, which so often outpaces fiction for depth and profundity, is that these women from backgrounds as diverse, and with some family dynamics with as much pain and drama that would rival anything seen on an Amazon Prime drama, come together as one in love of Christ.

They wear their love for Jesus and his Church on their sleeves and are living examples of what Catholic lay men and women are supposed to aspire to: deeper communion with God, love of Jesus and the Church, and love of others before self.

Jesus gave us beautiful but sometimes paradoxical teachings to show us the way of happiness and truth, like losing our life to gain eternal life, or taking the last place in order to be first.

The Carmelite Sisters of the Sacred Heart and the hundreds of other religious sisters in orders around the Archdiocese of Los Angeles may look like they belong in the past, but their zeal, their ministry and their tireless and joyful witness they give with their lives are more likely a sign of the future.