What it takes for film to reach our ears

Midge Costin’s documentary, “Making Waves: The Art of Cinematic Sound,” is a fascinating and instructive peek into a world hitherto unknown to most of us.

The film traces the history of sound in film, examines the ways directors and sound designers work together, and features the latest discoveries and advances in sound technology, all while managing to remain warm, lively, and human.

Director-producer Costin is a graduate of USC Film School, a veteran, award-winning feature film sound editor in Hollywood, and the holder of the Kay Rose Endowed Chair in the Art of Sound Editing at the USC School of Cinematic Arts given by George Lucas in 2005. Producers-writers Bobette Buster and Karen Johnson round out the team.

Costin came out of USC as a picture editor. Sound was the last thing she thought of doing: too technical, she thought; a tangential element unrelated to story and character.

By chance she happened into a sound editing job. “I didn’t care for being on the set: noise, chaos, big personalities. But I could definitely be alone in a dark room and hyper-focus.”

She discovered that sound brings emotion to the picture, often in very subtle ways. She fell in love with it, and with her colleagues. By 1987, her career was off and running.

Over time, her USC network grew. So did her appreciation of sound in the world and her life: people’s voices, breathing. Passing that awareness on to her students is deeply fulfilling.

“I’m a teacher in the end. Early on in the class I’ll play clips and ask them, ‘What do you hear? What are you feeling?’ Maybe they’ll hear the sound of the wind and that will bring them back to a certain time in their lives. Sound evokes visual memories, and that’s when you can start thinking about linking sound with pictures.

“I tell them, my students, ‘Show up on time, do what you say you’re going to do, be a good collaborator.’ And if you’re not really passionate about film then I would say, ‘Get out while you can.’ Thank God for unions. But the hours are crazy.” 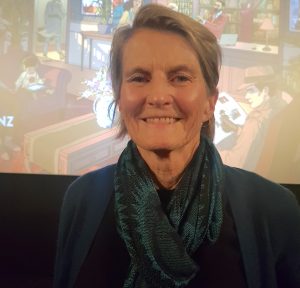 Costin wanted to showcase some of the people “below the line.”

“Above the line in the credits are the producer, director, actors, production designer, composer. Sound editors end up below the line with the crafts-service people, not that we’re not grateful to them, too. But I feel that in post-production, we’re filmmakers as well, each with our own area of expertise. I hope the film shows how much effort, artistry, creativity, and detail go into the work.”

She also hopes “Making Waves” breaks through the stereotype that women can’t cut sound effects. “My students are so diverse, and from all over the world, so it was important to me to show diversity in the film as well.”

The documentary was nine years in the making and features, among other notable directors, Steven Spielberg, George Lucas, David Lynch, and Sofia Coppola.

It also includes some of the biggest names in sound. Walter Murch, called by Roger Ebert “the most respected film editor and sound designer in the modern cinema,” describes literally orchestrating the groundbreaking, six-speaker surround sound on “Apocalypse Now.”

Ben Burtt, who says he got his first jobs because Murch wasn’t available, acknowledges having a nervous breakdown after his early, huge success on “Star Wars.” The experience made him realize that he loved his work, but family came first.

“I put that in because we become really close to one another in this business,” says Costin. “We eat our meals together. We know who’s got a kid who needs special attention or a sick parent.”

Gary Rydstrom (“Terminator 2: Judgment Day,” “Jurassic Park,” “Titanic”) laughs that he got his first jobs because Burtt wasn’t available. His love for the craft and respect for his fellow sound pioneers is palpable. 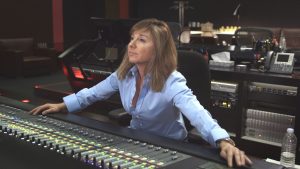 Anna Behlmer at a mixing console. (COURTESY OF "MAKING WAVES")

By the end, you’re proud to be an Angeleno, grateful for the people “below the line,” and cognizant on a whole new level the depth to which sound in American film has burrowed into your bloodstream. Tarzan’s jungle cry. Lauren Bacall’s “You know how to whistle, don’t you, Steve?” The rushing water in “A River Runs Through It.”

I didn’t think a documentary about sound editing could bring me to tears, but “Making Waves” managed the task.

Maybe it was Oscar-nominated rerecording mixer Anna Behlmer (“Braveheart”) who got to me, sitting at her console and saying exuberantly of her life’s work: “When you feel those goosebumps, you know you’ve got it right. … I pinch myself every day.”

“Making Waves,” recently nominated for Critics Choice Awards for First Doc Feature, comes to theaters nationwide and to various Arclight theaters around town Oct. 25. It premieres Saturday, Oct. 26, at 3 p.m., at Beverly Hills’ Ahrya Fine Arts. A panel Q&A will follow with, among others, Murch, Rydstrom, Costin, Buster, and Johnson.

Costin winds up: “My blood family’s back in Boston but my family here in LA is my sound family. This is a passion project for me and I’m over the moon that it’s getting out to the world.”