Were Pope John Paul II under quarantine today, he’d be dreaming of the mountains

ROME — On the 100th anniversary of his birth, it’s a fair question to ask what’s left to say about St. Pope John Paul II that hasn’t already been said countless times.

“God’s athlete,” the mountain-climbing charismatic young pope from the East, revitalized Catholicism after a decade of hand-wringing following “Humanae Vitae” (“Of Human Life”); he helped bring down Communism; he took the papacy on the road, visiting 104 countries and traveling the equivalent of 3 1/2 times to the moon; he was shot and forgave his attacker; and, in the end, he offered the world an indelible example of death with dignity.

All that has been chronicled endlessly, which has been a helpful, but, in some ways, superfluous exercise, at least for those of us old enough to remember, because anyone who watched Pope John Paul in action will never forget any single second of it.

It was often said that if Karol Wojtyla had not entered the priesthood, he would have been a movie star, probably the Polish George Clooney. From beginning to end, you simply couldn’t take your eyes off him.

So, perhaps one way to seek a fresh approach to the Pope John Paul story is to imagine him alive today, and to situate him in the context of the coronavirus (COVID-19) pandemic. What would he be thinking and feeling right now?

Not as the pontiff, necessarily, but personally, as someone like the rest of us chafing under quarantine, sitting in the papal apartments and dreaming of what he might do as soon as movement without restriction is possible again.

Though there’s no way to know for sure, I’m willing to bet real money I know the answer. 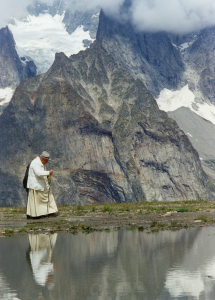 Given the timing, Italy is unlikely to authorize free movement between regions until early June, so we’re basically talking summer. That means Pope John Paul’s thoughts naturally would turn to his summer vacation — unlike Pope Francis, he actually took summer breaks — and, for 10 of his 26 years, he would head off in July for the tiny hamlet of Les Combes d’Introd in the far northern Italian region of Val d’Aosta, nestled at the foot of the Italian Alps.

He stayed in a small chalet owned by the Salesians and located on a larger Salesian compound. The first four Julys were passed in a quaint pre-existing residence, which is now private property, but the last six were in a newer villa custom built with an elevator for an aging pontiff who could no longer climb the stairs to reach his bedroom, or his balcony to gaze out on “Monte Bianco” (“White Mountain”), at 15,800 feet the tallest peak in Italy and central Europe.

While he was still able to do so, Pope John Paul would take long walks each day up in the mountains, often above the snow line, where more than once he would startle a local, who would wave at the man in the white parka and ski boots.

Among the most treasured photos in family homes all over Val d’Aosta are shots of times they’d invite Pope John Paul in for a cup of hot tea or malted wine, and he’d sit there for a while passing the time, as if the local parish priest had just dropped in for a chat.

Pope John Paul was an ardent naturalist, convinced that a retreat center and an audio/visual system were poor substitutes for a kayak and a tent in terms of seeking God. However, nowhere did he feel as spiritually aroused as in the mountains.

As a young man growing up in Wadowice, Poland, and later as a priest and a bishop in Kraków, he spent countless hours exploring the Tatras Mountains. The chain overlaps the border between Poland and Slovakia, and its highest peak on the Polish side is more than 8,000 feet tall. He actually became known as the “Daredevil of the Tatras” for his passion for the most challenging ski runs. 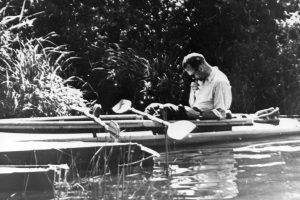 For Pope John Paul, however, the mountains weren’t just a fun place to recreate. They were also a privileged setting to encounter God.

In his final 2004 Angelus address in the Italian Alps, Pope John Paul called the mountains an “oasis of quiet” and riffed on the spiritual importance of temporarily shutting off the world’s noise, saying that “only in silence can a person hear the voice of God in the intimacy of their conscience. It’s what truly sets us free.”

“Every time I have the possibility to go to the mountains and to contemplate these landscapes, I thank God for the majestic beauty of creation,” Pope John Paul said during a 1999 Angelus address in Les Combes. He called the mountains not merely a spectacle of nature, but a virtual “school of life.”

“In this school,” he said, “we learn to strive for a goal and to help one another in difficult moments, to enjoy silence together and to recognize one’s own smallness in so solemn and majestic a setting.”

As we mark the 100th anniversary of the birth of one of the most remarkable popes in the long history of the Church, perhaps it’s worth allowing our own thoughts to turn to the mountains for a bit.

Shortly before he was assassinated, Martin Luther King Jr. famously said he wasn’t worried about the length of his life because, “I have been to the mountaintop.” Pope John Paul II had been there too, more times than he could count, both literally and metaphorically, and those experiences helped give him the resolve and the strength to change history more often than most of us change addresses.

Perhaps once this crisis eases, we, too, might think about opportunities to find our own mountaintops, places where silence and our own smallness in the face of majesty can shape our thoughts about what comes next, for ourselves, and for the world.