The world beyond the lighted window

In this culture of takedown tweets, clickbait wars, and foaming-at-the-mouth newscasters, drowning out the distractions can be difficult.

How refreshing to discover, at the eye of the maelstrom, a recent book by Peter Davidson, senior research fellow at Campion Hall, University of Oxford. Davidson has already written an entire book about twilight, and another about the topography of the North, as represented in images and literature.

You might imagine this would be pretty thin gruel but I, for one, was captivated. It’s the kind of book you read with highlighter and post-its in hand, stopping every few minutes to jot down the name of a composer, painter, photographer, or writer.

Davidson speaks at one point of attending Mass, and the very fact that he would seize upon the lighted window as an emblem of our longings, desires, memories, and eternal search for home bespeaks a reaching for the transcendent; a world beyond this one.

Catholic, too, is his capacity for close friendship. He visits Ghent, Edinburgh at Easter, Paris, London. Many of his walks through these European cities are with treasured, longtime confidantes, colleagues, and companions.

But Oxford is his home turf and the book begins with a description of a night stroll through its darkened streets.

His powers of observation and description are stunning. Where if called upon many of us might describe the walk as, say, rainy and cold, Davidson sees “pools of lamplight on polished parquet,” the “pale yellow of wavering flames” cast on the faces of restaurantgoers dining by candlelight, and “the lanterns fixed high on the wall of Pembroke College.” “Reflections from street lamps and college windows glimmer dimly on damp flasstones, brighter on wet tarmac and cobble.”

The stroll leads him to recall a concert in a chill chapel of Vaughan Williams’ “An Oxford Elegy”: “rich-textured, profoundly sad music, lamenting for a lost friend, evoking long-past student days idling amidst the little hills and tributary streams of the upper Thames.” 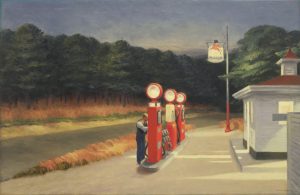 Each walk, or memory, or lighted window calls to mind a poem, a painting, a piece of music, or all three. So as you’re reading, you’re also being introduced to new artists, or receiving a fresh take on those you might already know.

The lighted window evokes a mood and Davidson explores a plethora of them, illustrating his point with images: lamplight reflected from the water of a lake (“Evening Scene with Full Moon and Figures,” Abraham Pether, 1801); the feel of a solitary lamp glowing from the turret of an isolated tower (“The Trumpeter’s Tower in Schwandorf, 1870); windows glimpsed through mist at nightfall (“Nocturne in Grey and Gold Chelsea Snow,” James Whistler, 1876).

In James Lynch’s “Dulce Domum,” 1994, Mole and Rat, from Kenneth Grahame’s immortal children’s book, “The Wind in the Willows,” trudge bravely through an English village on a wintry night, their lonely figures momentarily illumined by the cheerful lights in the cottage windows, homesick for their burrows and knowing that a long, cold walk lies ahead.

Davidson walks in wind, rain, snow. He reflects upon the solitary dreamer, reading by lamplight in winter near a window; the lit windows of a house by a canal; haunted houses whose windows emanate light that is eerie or menacing; an imagined medieval city in the snow (“Cathedral in Winter,” Ernst Ferdinand Oehme, 1819).

I learned of Isabel Codrington (“Evening,” 1925; an artist’s simple kitchen, the table laid with a teapot, bread and butter, and biscuits, to be savored after a rich and solitary day’s work); and of Joan Eardley (1921-1963), who painted the street children of post-war Glasgow tenements and the fishing village landscapes of Scotland’s northeast coast.

The lighted window in the U.S. speaks more to Davidson of isolation, loneliness, anxiety, and dread, albeit often overlain with an ambiguous, barely discernible strain of hope. Edward Hopper’s well-known “Gas,” 1940, depicting the solitary owner of a rural gas station as a mother-of-pearl dusk falls; Linden Frederick’s “State Highway” (2004), (“A lonely poetry of empty roads on snowy nights”).

Contemporary photographers Gregory Crewdson and Todd Hido shoot suburban scenes, often devoid of people, that leave open the question of whether, behind those blank, dully lit windows, everyone’s having a party, or loading their guns.

Bishop Robert Barron speaks of how on June 12, 1989, he stood transfixed for 20 minutes before the north rose window of Notre Dame Cathedral in Paris — so struck by its beauty that he visited every single day that year until he flew back to the states for Christmas.

Anyone who’s attended a vigil Mass in winter has been struck by the gradual fading of the light through the stained-glass windows, so that by the time Mass is ended, from the inside the windows have gone dark. From the outside, though, as we turn toward home, they glow with warmth: bidding us a good night, beckoning us ever back.