The truth is out there

It is part of our DNA to want to believe in the fantastic. It is why no conspiracy-busting YouTube channel will ever lack subscribers, whether it busts a conspiracy or not.

A conspiracy that has been around long before JFK and grassy knolls is the belief that one, UFOs are extraterrestrials visiting our planet; and two, governments across the globe have clandestinely sought to keep that information clandestine.

Between Bigfoot sightings, fluoridation of water, Paul McCartney’s untimely death, and a host of other conspiracies, UFOs took a back seat — until now. They are back in vogue, thanks to a pending U.S. government report on the number of recent UFO sightings flooding both new and legacy media outlets.

I must admit, I have found some of the newer UFO videos intriguing. Many are from highly reliable sources, such as the U.S. Navy, and they do make me wonder. These videos definitely show objects flying around our skies, and at the moment they are most certainly unidentifiable. That does not mean they are of alien origin, or that they do not have some other more logical and simple explanation.

Simple explanations did not assuage the anxieties of UFO believers in 1947 when a weather balloon landed in Roswell, New Mexico. It is therefore unlikely that whatever this upcoming government UFO report stipulates, most people will be satisfied.

I would not be surprised if the report is a litany of vague observations that will neither confirm nor deny the presence of alien technology. I guess the findings could be worse. It could be a case of good news — we are not looking at the point of the spear of an alien invasion. But the bad news is either the Russians or the Chinese have technology that makes a Lockheed/Martin F-35 Lightning Fighter Jet look like a Sopwith Camel.

So, when the government report is finally released, in whatever redacted form it assumes, be warned: you will feel neither relief nor foreboding. Those who already believe in UFOs as proof of life on other planets will find stats and data in the report that they will claim supports their position. Those that believe the physics makes it highly unlikely the odds of a life-sustaining planet like ours could be duplicated will probably mine their own data from the report to hold up their argument.

The internet will then do what the internet is so good at doing: keep the fires burning with algorithms designed to reinforce peoples’ biases, providing a lot of heat and little light. 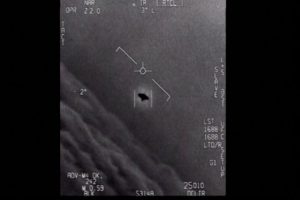 An unexplained aerial phenomenon is seen in this still image from the so-called "Gimbal" video captured by a U.S. Navy fighter pilot off the East Coast of the United States between 2014 and 2015. With the expected release this month of the U.S. Department of Defense's report on unidentified aerial phenomenon, Catholic News Service spoke to three experts on the potential discovery of extraterrestrial life and its theological implications. (CNS photo/U.S. Navy via Reuters)

We all want facts to support our own narratives. As the saying goes, history is written by the winners, which explains how history changes, as more time passes between the events and the subjectivity of those writing about them.

The apostles would not entertain the idea of Jesus having to suffer until they were chastised by him for it. And between the resurrection and the ascension, Jesus still had to remind his followers that his kingdom was not of this world.

All through the four Gospels, people who encountered Jesus, whether they be Roman centurions, fallen women, lepers, friends, or enemies, had their expectations and their personal narratives stood on their heads.

Be assured, when the government report is officially released some time this month, there will be narratives upheld and narratives questioned. To the zealots who see conspiracy behind every fuzzy Bigfoot video from the High Sierras, or who cannot be talked off the ledge of the sixth floor of the Texas Schoolbook Depository, their journeys of discoveries will continue.

For the rest of us, I offer only patience, and a final thought. Not to feed the conspiratorial beast, there is a historic event that may come in handy if indeed the government report discovers incontrovertible proof that TicTac-shaped aircrafts are not of this world. In 1969, the same year as the first manned mission to the moon, St. Pope Paul VI, in his apostolic letter “Mysterii Paschalis,” changed the name of the feast of Christ the King to Our Lord Jesus Christ King of the Universe.

So, if the truth is out there, let us be grateful that the truth has already visited our planet.