The story of an Alaska priest’s Siberian Gulag adventure

Magadan is part of Siberia, in far East Russia, and the capital of Kolyma, one of the most brutal sites in the Gulag.

The Gulag (1929-1953) were a series of forced labor camps established first under Lenin, then Stalin, as a way to implement the rapid industrialization of such resources as coal and timber. As well they became a place to warehouse political dissenters — anyone who believed in God was suspect — common criminals, the educated, and finally common people who were driven to exhaustion, starved, beaten, and thrown on the trash heap. Many died of disease; others froze; still others were executed.

Father Michael Shields, born and bred in the Anchorage Archdiocese of Alaska, has been pastor of the Nativity of Jesus Church in Magadan since 1994.

Having come back to the U.S. for a few years — briefly, he thought — for a knee replacement, the Russian government suddenly informed him that he couldn’t return until December of 2022. So he’s been serving his old parish in Palmer, Alaska, a rural farming community, and overseeing the mission from afar.

“I follow the God of the Impossible,” says Father Shields. “He’s done so many amazing things in my life that I’m not even concerned.” 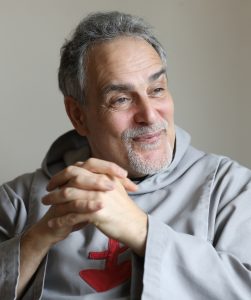 Father Shields first journeyed to Magadan in 1989 with Archbishop Francis Hurley. He returned twice, and found it dark, depressing, and harsh. Then, 10 years ordained, he went on a 40-day Jesuit retreat and heard a strange message: “Go pray in the camps.”

“It frightened me deeply. First, I worried that the words might not be from God. Secondly, I didn’t want to go.”

But at the end of the retreat, “God filled my heart with joy and took the fear away.” Two years passed before he was able to secure the archbishop’s blessing.

But in 1994 he went. “It was an adventure: I didn’t know the language or culture. We had no materials. No sacramentary, no lectionary, an old-fashioned Slovenic Bible … rock-bottom. Every day brought suffering but at the same time joy because I knew this was where the Lord wanted me.”

He and his supporters rented an apartment and started a small church. The faith had been almost entirely repressed under communism. The people were afraid and broken. Still, the parish started to grow. Father Shields began to develop fundraising skills.

The idea came to do a radio announcement for a meeting at the local library for anyone who had been in the prison camps. Father expected two or three. Eighty people showed up that first time.

“It was beautiful because they recognized each other. Some had been in the same camps. They started telling their stories. And I saw this was a whole ministry that needed to be done. They’d been lost in their apartments. Nobody knew who they were. They’d been labeled ‘enemies of the Fatherland,’ that’s why they were in the camps, and a huge stigma still attached. Many hadn’t told the details of their story even to their own family members.”

Meetings were held the last Saturday of every month. Gradually folk musicians were invited, even politicians. And gradually the survivors became a cultural attraction.

“People began lifting them up and seeing who they were; that they were heroic for their suffering. I taped some of their oral histories and had them translated into a couple of books in Russian.”

One, available online for free, is called “Strength Amid Suffering: The Martyrs of Magadan.” 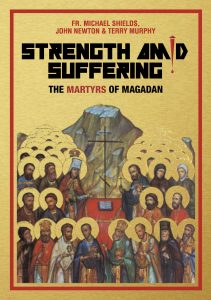 What do those martyrs have to teach us today?

They reported, almost to a person, that two things were critical to their survival. One was prayer.

“They couldn’t pray openly, obviously, but laying in bed at night everyone in the barracks would be praying, even though it was absolutely silent. They prayed contemplatively, in solidarity and communion, because that’s the only way they would survive till the next day.”

The second thing was forgiveness.

They were taken often at 17, 18, 19 years of age — their whole life was destroyed. Even after release, they were legally forbidden to enter such professions as nursing and teaching. Many missed out on marriage.

A window opened until 2000 or so. By that time the survivors had mostly died off. All many of them wanted was a Christian burial. “We were able to give that to them, with prayers.”

“My life has been incredibly enriched by rubbing elbows with these people. They carried their cross with great dignity. I’ve had the tremendous privilege of giving Communion to someone who had been persecuted for the faith.”

The mission continues to work with the poor, distributing clothing and food, offering AA meetings, working with women who have had abortions. “Confirmations, baptisms, marriages: just a normal parish except in a city that was designed to be a prison camp.”

“Christ told St. Francis, ‘Rebuild my church,’ but in Magadan, there was no church to begin with. The camp survivors suffered and prayed the church into being. Their presence was the foundation.”