The soul speaks at Lotusland

Madame Ganna Walska (1887-1984) was the type of Southern Californian eccentric over whom people from back East love to roll their eyes, muttering, “Land of the fruits and the nuts.”

Born Hanna Puacz in Brest-Litovsk, Poland, she was an opera singer who was married six times. She resided in New York and Paris, toured Europe and America, and eventually became attracted to California.

She eloped as a teenager with her first husband, a Russian count. Her fourth, known at the time as “the richest bachelor in the world,” proposed the day they met. Madame became interested in séances, Ouija boards, and spiritualism. Her sixth husband, 20 years her junior, was a yoga guru.

Done with disastrous unions, she purchased a 37-acre Montecito property in 1941 and spent the next 43 years creating the garden — routinely named one of the Top 10 in the world — now known as Lotusland. 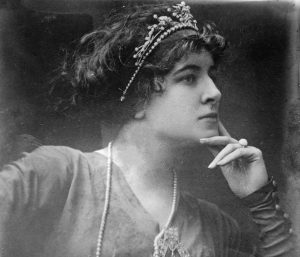 And the creative energy poured into this wondrous space establishes her as an artist and a human being of the highest order.

Reserve in advance and be prepared to cough up 50 bucks. The day I visited, the wrought-iron gates of the estate swung open, I checked in at the pale pink welcome kiosk, and the magic began.

A pearl-pink Lotusland begonia, backlit by a stab of sunlight, glowed in the shade of the Fern Garden. Dinosaurs might have ambled through the collection of cycads: tropical plants that have existed for approximately 300 million years. Madame Walska is said in the 1970s to have sold off some of her jewelry to purchase the 450 costly specimens — her final addition to the garden.

It was in the Insectary Garden, as I bent close to a stand of blue-flowering sage, that a tanned, trim figure in a tool belt appeared by my side. “Do you know how many kinds of bees we have in Lotusland?” he asked, in the friendliest possible way. I couldn’t say as I did: 110. “Do you know how many we have in California?” Nope: 2,000, give or take. “How about in North America?” Sorry, drawing a blank there, too: 4,400!

He pointed out a native bee that was to my untrained eye not much bigger than a mosquito; a clump of orange poppies, still blooming though in Southern California we tend to associate poppies exclusively with spring; and a stand of golden coreopsis.

This, it turned out, was Corey Welles, Lotusland’s plant health care lead. When he started 30 years ago he used fertilizers and insecticides, but in the decades since has been figuring out how to heal the soil by “partnering with the environment instead of fighting it.”

We stepped through a hedge and next thing I knew I was in a land of giant pumpkins and towering sunflowers, and Corey was talking faster and imparting more information than my mind could readily take in. The pumpkins are fed kelp and compost. That tree with the ivory-pink blooms was a peach. That hole near my feet? A vole lived down there, or did.

A vole is a rodent with silky fur like a mink that can regrettably damage plants. An unfortunate incident involving a garter snake ensued — I opted not to view the photo, or maybe it was a video, on Corey’s phone. “We have to let ourselves learn about these things!” he enthused. “Right,” I replied weakly. “The circle of life.”

“Did I just dream that?” I thought, as Corey gallantly deposited me back in the main garden. But Lotusland is like that. Around every corner is a surprise, a winding path, a new vista, a gasp-inducing, sui generis collection of antique stone figures called “grotesques” from Madame’s estate in Gallius, France (the Theater Garden), or plants exclusively in the blue-gray color range (the Blue Garden), or bromeliads, or palms, or dracaenas.

Everywhere are unique personal touches: the three bronze cranes in the Japanese garden, a narrow waterway behind Madame’s house lined with blue and white tile and surrounded by roses, a tiny stone lapdog-sized dwelling in the Insectary Garden that would have been perfect to house a statue of the Blessed Virgin.

My love for San Marino’s Huntington Gardens is second to none. But it’s impossible to imagine railroad magnate Henry Huntington choosing to showcase his aloe collection, as Madame Walska did, by installing a shallow kidney-shaped pool and converting it into a white-bottomed abalone shell pound flanked by two tiered fountains of gigantic clam shells and surrounded by coral-embedded lava rocks.

“One need not be in California long before he feels his soul beginning to stir,” she observed. “The air is magnetized … the consciousness awakens … the soul must speak.”

What with her passion, creative powers, and drive, I like to think that Madame Walska never forgot her deepest roots.

She was raised a strict Catholic.