The return of the Hollywood heroes

Maybe somebody has spiked the designer water in Hollywood lately, but despite the industrial-strength levels of self-righteousness, licentiousness, and overall decadent imprinting going on, this current movie season has more than a few notable exceptions.

​The biggest “breakthrough” I’ve seen in the films I’ve watched this year is the comeback of the hero. We tend to think that heroes in the traditional form are somehow less authentic or flat cardboard cutouts who pale in comparison to the flood tide of anti-heroes that have graced movies, television, and publishing since the 1940s.

But as progressive as Hollywood likes to think of itself, the concept of the anti-hero goes a little further back than the invention of the movie camera. You don’t need a Ph.D. in Greek civilization to see the anti-hero elements of Achilles in the Iliad. To those in Hollywood who don’t understand that sentence, rent “Troy,” starring Brad Pitt.

​But several of the films in current release, and some that might even garner an award or two, are truly throwbacks to the time when heroism, though complicated as it many times can be, is not out of fashion. And the presentations of heroic actions and heroic people are as varied as any mandatory diversity training seminar could hope for. 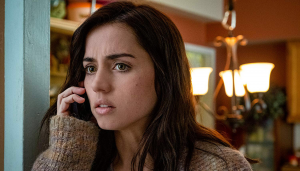 Let’s start with “Knives Out.” First, it harks back to a bygone movie-making era as an old-fashioned murder mystery with a spooky house full of eccentric people, all with a motive to have done away with the deceased character in the film. But the hero is a young Hispanic woman. She has foibles and possesses not a single superpower, but she has an adherence to the truth that takes on a unique physical manifestation, and although she ebbs and flows between victim and hero throughout the film, her final status is certainly one for the hero column.

“​Ford v Ferrari” is another retro-version of what used to be a Hollywood staple: the buddy picture. And these buddies exhibit heroic tendencies. It takes a certain kind of person to strap themselves into a hunk of machinery and drive it nearly 200 miles an hour on a straightaway. I was particularly touched by the heroic life the mechanic/race car driver leads. I liked it because he lived in a tiny little house, with a wife and son who loved him. That alone makes this a rather strange and “out of the box” entry to the Hollywood award season. 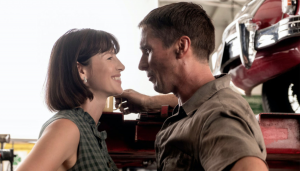 The only female character with lines in English this whole movie is the race car driver’s wife. And she isn’t depressed, repressed, or undressed in the movie. She loves her husband, she loves her little boy, and she is a true partner with him and goes through his triumphs and defeats in a beautiful manner. Her husband does heroic things, but so does she — maybe not the kind they would make an entire movie out of — but they could.

​Who would have thought that mainstream Hollywood would, in 2019/20, produce a film with strong studio backing about a gun-toting, deeply religious person with an affinity for the Republican Party who isn’t at the same time some kind of dolt or mentally ill person bent on oppressing the working people of the world, destroying the environment or working to bring about nuclear Armageddon. But they did, and they called it “Harriet.” 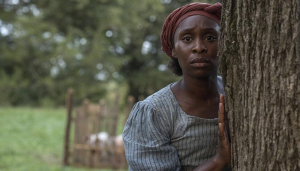 Harriet Tubman’s life was the personification of heroism, and the film “Harriet” treats her legacy with intelligence and care. It’s a film hard to watch on a lot of levels, but Harriet is truly heroic in the classical sense. She sees injustice and cannot stand for it. She risks so much to do what she knows is right; what a concept picture.

And then there is “1917,” a traditional war movie in every sense, until it isn’t. Its technologically advanced filmmaking style continues to baffle me, and I have seen the film twice. It is about war, which automatically puts it in the heroic realm. But unlike war movies where the hero is braver than brave, or more modern war movies where the hero isn’t a hero at all but either just a flipside version of a maniac or a coward or worse, the main character in this film is an everyman, full of fear and trepidation, but at the same time single-minded in his quest to accomplish the mission — the very definition of the classical heroic model. 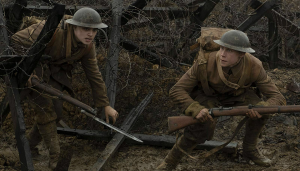 Sorry for the spoiler alert here, but as good as these movies are, don’t think Hollywood has somehow come to its senses and will produce more and more films like these with solid universal truths in them. Things will be back to “normal” soon enough, so let’s enjoy the ride while it lasts. ​