The laborer is worthy of her hire

Recently I was on a friend’s podcast discussing my essay collection, “Ravished: Notes on Womanhood.”

He and I talked a bit about my former life as a Beverly Hills attorney. After several agonizing years of soul-searching I gave up that job, along with the money, benefits, and prestige, in favor of the precarious existence of a creative writer.

“What would you say to the woman who works in a law firm and hits the glass ceiling?” my friend asked at one point.

My mind short-circuited. “I guess … uh … I can’t imagine wanting to move up the ladder in a law firm,” I laughingly stammered.

“That’s not a slur against lawyers,” I continued. “It’s a reflection of the fact that I absolutely was not called to be a lawyer. But I guess I’d say give it everything you have, but if you can’t move up any further look at it as a blessing in disguise. Because maybe you want to order your life to something other than power, property, and prestige. And if you’re a lawyer for the right reason — which is because the law is your vocation and your way to give to the world — then you’ll figure out a way to do it no matter how much or how little money you make.” 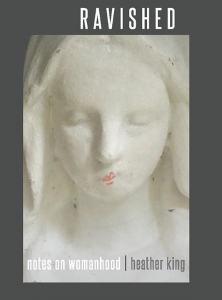 Afterward I pondered his question for a long time. “Render unto Caesar what is Caesar’s and to God what is God’s,” said Christ. In a way, moving up the corporate ladder is a question for Caesar. Of course, we’re all entitled to make a living. Of course, our expertise and gifts should be equally remunerated whether we’re women or men.

I speak as a woman who has made my way in two professions — the law and publishing — that are largely run by men. In fact, as I told my interviewer, I’ve had to learn to negotiate salaries, ask for raises, navigate my way around substandard editors, and repeatedly insist upon being paid what I’m worth.

Nonetheless, my question has never been how to break through a “glass ceiling.”

My question has always been how to live fully on the money I make, while doing what I was put on earth to do. To ask the glass-ceiling question puts all the power in “their” hands. When I forge my own way, take responsibility for my own happiness, use my creative powers to sow love in every area of my life, the power remains, as it should, in mine.

The distinction is no small point. It touches directly upon the victim mentality that permeates our culture. It represents a decision to live in a state of gratitude rather than grievance.

In grievance mode, I tell myself I’ve never been steadily supported by a man financially, emotionally, or vocationally. In gratitude mode, I remember my late father, a bricklayer with eight kids who sent me a hundred hard-earned dollars every week while I was in law school. I remember the benefactors, editors, publishers, and priests who have variously encouraged, supported, ministered to, and hosted me.

In grievance mode, I tell myself I’ve had no cheerleader, no mentor. In gratitude mode, I remember that I’ve had Flannery O’Connor and Dorothy Day and Caryll Houselander and St. Thérèse of Lisieux. I’ve had incredible female friends. I had — still have — my late sainted mother.

In grievance mode, I’m at great pains to let people know how hard I work, that I come from blue-collar roots, that I’ve supported myself since the age of 13. I’m not sure what I’m looking for: A handout? Pity? A gold star? 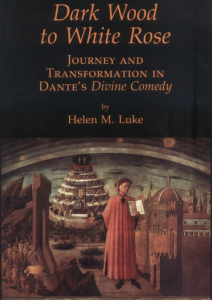 I do work hard. But I also have time to loiter in the garden watching the butterflies, or to read for an hour in the park, or to watch a whole catalog of film noir. The truth is I’ve consciously arranged my life so that every second isn’t scheduled, commodified, monetized.

“Dark Wood to White Rose” is scholar Helen M. Luke’s Jungian-Christian take on “The Divine Comedy.” Dante, she points out, reserved a special horror for userers.

“How powerful an image it is that the userers are the lowest of all in these circles of the violent! They are the cold plotters of camouflaged violence and are therefore found on the very threshold of the pit of fraud. It is not to be thought that they are simply the people who lend money at exorbitant interest. We are userers whenever we make demands upon others as a return for our actions or gifts; whenever we say or subtly feel that we are owed something or by life itself.”

Life owes us nothing. Life has been given to us, in all its fullness, as a stupendous gift.

The other day I rose at 5 a.m., prayed, went to Mass, wrote for three hours, worked in the garden, scrubbed the kitchen floor, did a load of laundry, balanced my checkbook, and returned three phone calls.

In grievance mode I would have inwardly carped, “Is my work never done?” In gratitude mode I gazed out over my balcony at the setting sun, and thought: “I am way overpaid.”