The hidden lives of trees

Peter Wohlleben manages a forest in the Eifel Mountains of Germany. He’s most familiar with “the struggles and strategies of beeches and oaks.” And from decades of observing, studying, living, breathing, and walking among the trees, he has come to discover a parallel world that is invisible to most of us.

Modern forestry is principally concerned with producing lumber. It was Wohlleben’s job to size up hundreds of trees a day with an eye toward the marketplace. It was only when, in the mid-90s, he began to organize survival training and log-cabin experiences for tourists that he began to wake up to the mystery, variety, complexity, and wonder of trees.

He wrote about that awakening in the 2015 bestseller “The Hidden Life of Trees: What They Feel, How They Communicate: Discoveries from a Secret World” (Greystone Books, $17).

The Foreword by scientist, explorer, and conservationist Tim Flannery sets the tone:

“One reason that many of us fail to understand trees is that they live on a different time scale than us. One of the oldest trees on Earth, [Old Tjikko], a spruce in Sweden, is more than 9,500 years old. That’s 115 times longer than the average human lifetime.”

Trees, it turns out, are social. They’re sophisticated communicators. They experience pain, have memories, and live with their children.

Trees can “taste” and “smell.” Certain trees release chemicals to alert their neighbors that a threat — in the form, for example, of a leaf-eating giraffe — is at hand. Others, when under attack by insects, send out chemical signals to attract predators that will eat the insects.

Trees exchange nutrients through their root systems, including with their competitors. The system is to everyone’s advantage, because a grouping of trees creates an ecosystem that, among other things, can regulate temperature, store water, and generate humidity.

Sick members of the community are nursed and nourished; it’s as if trees, too, exist as part of a Mystical Body. So strong is the instinct toward collective health that a kind of equalization principle is at work, whereby more robust trees work to strengthen the weak.

As with humans, trees that grow in isolation generally fail to thrive. And as in the human world, hierarchies exist — certain trees are favored. A tree will voluntarily curtail the growth of branches that would otherwise impinge upon the light needed by a neighboring “friend,” but have no problem in crowding out a “nonfriend.” Roots of friends become intertwined to such an extent that they sometimes even die together.

Trees register pain by means of electrical signals at the site of the wound. Chemical signals are also transmitted through fungal networks that form around the root tips.

Trees know how to conserve energy: They can go through periods where they “sleep,” then, possibly after several years, “wake.” Mother trees purposely limit the amount of light available to their children, as slow growth makes for longevity.

Trees store water in order to survive hot summers and drought. Wohlleben considers the mystery of how that water makes its way from the trees’ roots all the way up to their leaves.

Insects, butterflies, bees, foraging animals, birds: all depend upon and, in a kind of complex, intricate dance, interact with the trees’ pollen, seeds, leaves, nuts, and flowers. 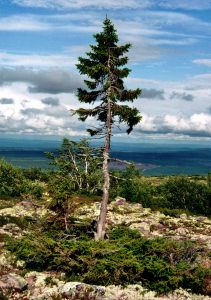 Old Tjikko is a tree in Fulufjäll in Sweden which is claimed to be the oldest tree in the world, by age of its root system. (Wikimedia Commons)

Over time, Wohlleben developed a new way of managing forests that is both more productive and more profitable: more humane, you could say.

He goes so far as to speak of love among trees.

Some may object to such anthropomorphization but universally acclaimed children’s author Hans Christian Andersen took things a step further.

In fact, this is the perfect time of year to read, or re-read his short story “The Fir Tree.”

Andersen’s young tree lived in a beautiful forest. “The sun shone, the soft air fluttered its leaves, and the little peasant children passed by, prattling merrily, but the fir tree heeded them not.”

The tree was so restless, in fact, that “it took no pleasure in the warm sunshine, the birds, or the rosy clouds that floated over it every morning and evening.” Sound familiar?

In winter, when the snow glittered on the ground, the fir saw that other, bigger, trees were chosen to be cut down and carried away by laughing bands of revelers. “Oh, if I could but keep on growing tall and old!” the fir tree thought. “There is nothing else worth caring for in the world!”

Moral: Let’s enjoy that warm sunshine, those rosy clouds, and the friends and family with whom the good Lord has graced us now! Wishing one and all a blessed Christmas.