All the swashbuckling old movies I cut my teeth on while watching late-night TV always seemed to have the same category of heroes and villains. The good guys were the English, and the bad guys were the Spanish. The English stood for honesty, goodness, and fair play, and the Spanish were sneering, superstitious, and enemies of freedom.

History is written by the “winners,” and as Errol Flynn swashed his buckle from British men-o’-war to Spanish galleon in so many movies, the results were always the same. The British Empire, and all the goodness it represented, prevailed, while the sinister Spanish Empire slunk back into the shadows, no doubt to appear again in the next Errol Flynn movie.

As my wife and I toured Mexico recently, I saw a different aspect of the Spanish Empire. That’s not to say I am here to defend or cheer for colonialism, a historical reality awash with negativity it mostly deserves.

Yet modern-day Mexico is rife with vestiges of the once-mighty Spanish Empire, especially as seen through the prism of all the houses of worship that empire left in its wake. Whether it is metaphysically possible to have two “first” impressions or not, I was struck by both the immense scale of Mexico City’s geography and by how many churches could be found in this metropolis. By the end of the week, it felt like we had visited most of them.

Though some of these churches looked ancient by our standards, and some of them were actually leaning precipitously (thanks to the mushy topography that happens when you build one of the largest cities in the world over what used to be a lake) inside the churches the red candle burned next to all the tabernacles. People, not just us tourists, prayed silently. The Blessed Mother, whether depicted as our Our Lady of Guadalupe, or with any of the other mantles she used to reach her children, looked down on us with loving eyes.

And because we brought along our own bishop and two priests, there was the holy sacrifice of the Mass. It may have sounded different, and even looked a little different from the time the original Franciscan missionaries came, but bread and wine was transformed into the body, blood, soul, and divinity of Our Lord just the same.

Besides churches, we also visited the remnants of a lost civilization of elaborate pyramids. Travel is good for the brain as well as the soul, and I learned these pyramids outside of Mexico City were not, as I thought I knew, something the Aztecs left behind. They were ruins when the Aztecs first set their eyes on them. It felt like walking through a desolate cemetery where all the information on the gravestones had been worn away. 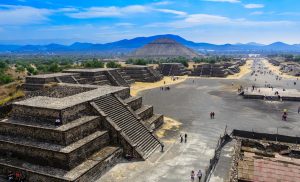 The Pyramids of Teotihuacan in Mexico. (Shutterstock)

The Spanish Empire may be as dead as the empire that built the pyramids of Teotihuacan, but something else thrives. As old and musty as some of the churches we visited were, the faith hasn’t gone back home in defeat to Europe. The lights are still on. As troubling as many of the Spanish Empire’s techniques to subjugate the land and its people were, the tireless work of Franciscans, Dominicans, and Jesuits did some empire building of their own, and the fruits of that labor are alive and well in Mexico today.

The Spanish Empire, or at least the empire envisioned by the likes of Queen Isabella and King Charles V never came to fruition — or did it?

The Roman Empire now exists only between the covers of books and Roman structures are the stuff of guided tours and museum visits. But the Spanish-built cathedrals and chapels of 500 years ago remain. The ancestors of Spanish colonial governors and indigenous peoples those governors subjugated worship God together, and weaving this tapestry together is the Church and the holy men and women who saw themselves as soldiers of a different stripe.

The Church has always been able to adapt and incorporate cultures it encounters; identifying what is true and sanctifying it, while resisting and transforming things that are not. Human sacrifice, out; bloodless paschal sacrifice: in.

The Church and her members have not always been perfect, and the priests and religious were not always welcome by the Spanish ruling classes. But through it all, this amazing, blended world, with all its contradictions and elements of the old and new, is as alive today as it was when the bishop of Mexico demanded some form of physical proof from a lowly Aztec Indian convert.

Spain may have never achieved its much sought-after hegemony over its archrival Britain, but the faith it planted in so many parts of the world remains — and that is a legacy worth more than all the gold Hernan Cortez could have ever dreamed about.