The challenge of seeing the past clearly

Pope Paul IV, who ruled the Church with an iron fist from 1555 to 1559, was not a beloved pope. A promoter of the Inquisition, he once said he would gather the wood for a fire if his own father was found to be in heresy.

He made Rome’s Jewish residents wear distinctive yellow markings, restricted their activities, and locked them in that ghetto each night.

Both Jews and Christians despised him, and when he died, Romans beheaded one of his statues and destroyed others. Today, one remaining statue is located in the Carafa Chapel in the beautiful Dominican church of Santa Maria sopra Minerva. To gaze on it is to see a remorseless and cruel man, and it is easy to understand the rage with which the Roman citizens destroyed his likenesses once death had released his grip on them.

All of which is to say that the destruction of statues by angry people has a long precedent, and it is a precedent the Church has experienced. We saw similar pent-up anger when Iraqis toppled a towering statue of Saddam Hussein and beat its face with their shoes. Such acts function as a kind of emotional liberation, punishing an inanimate object for decades of abuse by the man it portrayed.

Today we are in the midst of a wave of statue topplings. As in centuries past, this destruction is often the result of years, even centuries, of frustration. But in a country poorly educated in both history and civics, such actions can be more symbol than substance, and even an ignorant symbol at that.

What has attracted the most attention recently is the removal — sometimes by force, sometimes by state decree — of statues memorializing leaders of the confederacy. These were men who divided our country and fought for the right to keep other human beings enslaved. There was nothing heroic in this goal worth celebrating.

In addition, many of the statues were erected in the time of Jim Crow, when the statues were intended to affirm white dominance and the continued subjugation of a nominally free black population.

To remove these statues is to address the injustice of the message these statues were intended to convey. It must be added that their removal does not substantively address the wrongs of racism and racial disparities. That work remains to be done.

These topplings have been followed by other attempts to destroy statues of historic figures. Of concern to Catholics is the anger directed at St. Junípero Serra, the Franciscan missionary who established the famed missions of California.

Both before and after his beatification in 2015, he has been vilified as a symbol of the colonial oppression of the Spanish conquest of California and more. Statues were pulled down in San Francisco and Los Angeles, and now others are threatened.

In a nuanced and sensitive letter written ahead of his July 1 feast day, Archbishop José H. Gomez acknowledged that Serra has become a symbol of the destruction of the “ancient civilizations” of California’s first peoples, and that real crimes were committed against them by colonialists and by the white Americans who followed them.

“But history is complicated,” the archbishop wrote. “The facts matter, distinctions need to be made, and the truth counts. We cannot learn history’s lessons or heal old wounds unless we understand what really happened, how it happened, and why.”

St. Junípero was no Pope Paul, no Saddam Hussein, no Jefferson Davis. He was a man of his times, but he was also a hero of that time. He followed the colonial forces into California, but he became an advocate of the native peoples, intervening on their behalf repeatedly, opposing capital punishment and creating for them a “bill of rights.” He was driven not by material lust, but by the Gospel. 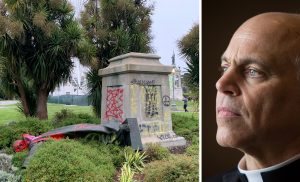 As San Francisco Archbishop Salvatore Cordileone wrote July 3 in the Washington Post: “Serra repeatedly intervened for mercy on behalf of indigenous rebels against Spanish authorities. He famously walked to Mexico City with a painful ulcerated leg to obtain the authority to discipline the military who were abusing the indigenous people.”

History is complicated. It is more than a movie, which is how many of us get our history now. That it is complicated is not an excuse, but it demands of us the willingness to fully understand the context and to look beyond the slogans and simplifications of an age that considers itself enlightened.

The real danger is not that we who do not know history are doomed to repeat it. It is that we will have no hope of understanding our present or bettering our future.