On the road during Holy Week this year, I attended noon Holy Tuesday Mass at the Church of the Sacred Heart in the border town of Nogales, Arizona.

The Gospel that day was the story of Judas, poised at the Last Supper to betray Christ. “What you are going to do, do quickly. … So Judas took the morsel and left at once. And it was night.”

It’s night in a lot of places at the moment. The news would have us believe that it’s night just about everywhere.

But every so often I hear a homily that pierces the night. The priest that day gently pointed out that every one of us is exactly like Judas. How many times have we sold him out for 30 pieces of silver — or, for that matter, way less? We, too, dip our morsel in the dish of the Eucharist. We, too, go out and commit deeds in the darkness, that constitute anything but love.

“Let’s not waste our time criticizing the pope, complaining about the Church, and demonizing those on the opposite side of the political fence,” the priest continued. “Let’s think about the old-school idea of making reparation. We don’t even want to make reparation for ourselves, never mind others. But that’s what we’re called to do as members of the Mystical Body. When one part is hurting, we’re all hurting.”

Later I reflected that the Gospel-based notion of reparation, however, is utterly distinguishable from the self-abasing, faux, public “apologies” currently demanded by woke culture for real or perceived wrongs.

Mea culpa without Christ becomes a kind of travesty. Snitching, shaming, the imposition of groupthink, the hatred and fear of truth, especially from the safe preserve of online anonymity, simply gouge the original wound deeper. In fact, the credo behind woke culture’s judge-jury-and-executioner modus operandi isn’t “my fault” at all, but rather “your fault.”

Moreover, the “system” behind “the hierarchy of the Church,” “the patriarchy,” and “systemic racism” — to name just a few of the institutions on which so much contemporary evil is blamed — is the human heart.

Blaming systems instead of considering the human heart — which from the dawn of man has been so easily tempted by property, security, and prestige — simply results in a shifting of power between oppressed and oppressor.

A theory that stops short of the human heart assumes that one group is all good and the other all bad. An organizing principle that shifts blame to a system instead of the individual conscience results in stagnation, isolation, and ever more stringent limitations on freedom, creativity, and love.

The Gospel, at Luke 19:1-10, provides one blueprint for reparation. When Zaccheus, the tax collector, woke up to his cruelly extortionate ways, he offered half of his belongings to the poor. He pledged to pay back everyone he’d cheated fourfold. And he sought out the people, grounded in Christ, who would support him in his new way of thought, action, and life.

Authentic recognition of our complicity in the suffering of the world, whether personal or collective, demands conversion of heart, not the mouthing of ideological slogans. Authentic reparation requires action based on fellowship and community. Authentic change requires hope.

“Writing the Big Book: The Creation of A.A.,” by William H. Schaberg, recounts the long and winding story of how “The Bible of A.A.” came to be. 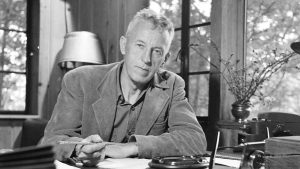 After that initial conversion, he also devoted the rest of his life to an organization that by all accounts has saved millions of lives. His task in writing the “Big Book,” back in the late 1930s, will be familiar to any Catholic writer: make the language too Christian on the one hand and you turn off the atheists and agnostics; not Christian enough on the other and you turn off the churchgoers.

“By degrees I find that I have become a rather orthodox Christian. But I do not find, at least within our group, that I can better serve God by demanding that anyone agree with me. … I may be wrong but I fancy Christ himself … would be interested in Christian results rather than Christian professions.”

Thus was born the slogan “Attraction, not promotion.”

And what are those “Christian results” that Wilson spoke of? Ongoing moral inventories. The making of amends. The development of a prayer life. The decision to devote oneself to service.

From a survey of some of my closest friends, staying sober and helping another alcoholic or addict stay sober is a lifelong, daily, labor. And it’s one of the biggest acts of reparation I can imagine.

“Attraction, not promotion” is the PR approach of the Gospels as well: not “Thou must,” but rather, “Welcome.” Not “You’re guilty,” but rather, “I am.” Not “We’re all trapped in a hopeless, hateful ‘system,’ ” but rather, “Come and see.”