Nicole R. Fleetwood is the author of “Marking Time: Art in the Age of Mass Incarceration” (Harvard University Press, $27.95).

There are two ways to read her book. One is as an indictment of the prison industry.

Here, however, I needed no convincing. The U.S. has the highest rate of incarceration in the world, with almost 2.3 million people behind bars. Incarceration has increased 50% in the last 40 years. Black Americans are incarcerated in state prisons at nearly five times the rate of white Americans.

No human being, whatever his or her crime, should be subject, to name just one example, to the torture of 24/7 confinement.

The second way is as a book, as the subtitle implies, about the art made in prisons.

As Fleetwood beautifully details, such art is made against almost insurmountable odds, the first being simply to acquire the materials. Prisoners employ almost superhuman ingenuity in that regard, using among other things hair gel, ash, tin foil, human hair, toothpaste, dye from M&M candies, and bits of fabric from sheets and clothing.

After all that the art is often confiscated or forbidden. Many states have laws against selling it. Unimaginably harsh conditions that can include solitary confinement for years on end are intended to break the prisoner, and frequently do. Even so, many inmates manage to use art as an expression of the human spirit, of the soul’s longing, and of the refusal to be extinguished as an individual of dignity and worth. 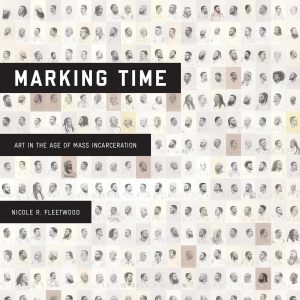 The cover of "Marking Time," by Nicole R. Fleetwood. (Amazon)

Todd (Hyung-Rae) Tarselli has been incarcerated in Pennsylvania since 1992, seven of those years in solitary confinement. Among other projects, he has collected maple leaves that flutter over the razor wire, past the guard towers, and into the yard, and draws scenes of nature: a chipmunk, a stand of trees in autumn.

Dean Gillespie, wrongly convicted, spent 20 years in Ohio prisons. For one project, he clandestinely amassed a quantity of dental compound from which he made hundreds of tiny bricks and, utilizing popsicle sticks, cardboard, and chipboard, constructed a replica of a mid-century movie theater complete with curtained windows and silver marquee.

One of the most haunting images in the book is the self-portrait, in pencil and pen, drawn by Billy Sell in 2012, while he was being held in long-term isolation at the SHU unit of California’s Corcoran State Prison. His eyes, behind rimless spectacles, question, ache, burn, agonize, and indict the viewer, all at the same time. Sell committed suicide in his cell the following year.

Lisette Oblitas caused an accident while drunk in which Phyllis Porter, an elderly woman much beloved by her family and community, died. During her 4 ½ years in a Connecticut prison, Oblitas used art as a way to honor the life she had inadvertently taken.

“In Your Eyes” (2013), for example, is a self-portrait in which she depicts her own face with the eyes of Porter. “I use her eyes because I feel my life is no longer mine,” Oblitas noted. “It’s also hers. Part of her lives within me. And through her forgiveness and her family’s forgiveness, I use her eyes as a lens where I can now see with more compassion toward others.” 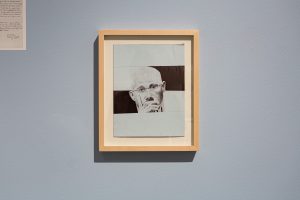 "Billy Sell, Self-Portrait," 2012, as part of the Marking Time: Art in the Age of Mass Incarceration installation at MoMA PS1 in 2020. (Image via Facebook @MarkingTimeArt)

Julie Green, an artist who died last month, used art and prisons in a different way. Green was known for her “Last Supper” series, in which over a period of decades she depicted more than 800 of the last meals requested by U.S. convicted inmates before being executed.

An art professor at Oregon State University, Green advanced no particular political agenda, though her hope was that capital punishment in the U.S. would end.

Living in Oklahoma in 1999, Green would read in the morning paper of executions that had taken place the night before, including descriptions of the prisoner’s clothing and last meal. “Comfort food,” she thought. “It humanized death row for me … I related to that inmate.”

She started doing sketches on paper, illustrating the meals. Then she thought to match medium with content and realized — ah, plates.

She painted in blue on used white ceramic plates of various shapes and sizes. Photos of the plates are archived by state and date. Each meal is described, along with the date it was eaten, but the inmates are not named.

The state of California allocates $50 to accommodate last meal requests. An inmate executed on Jan. 29, 2002, asked for two grilled cheese sandwiches, a pint of cottage cheese, hominy, a piece of peach pie, a pint of chocolate ice cream, and radishes.

Requests across the country range from one honey bun (South Carolina) to pickled pig’s knuckles and pig’s tails (Tennessee) to a single apple (Montana).

One man received permission for his mother to come into the prison and “home-cook” his last supper: German ravioli and dumplings.

An inmate from Indiana shared pizza and a birthday cake with 15 family and friends. Green noted on her painted plate that he had never had a birthday cake before. Several plates read “None” or “Declined” — as in no last meal requested.

One-thousand five-hundred thirty-eight people have been executed in the U.S. since the 1970s. In very different ways, Fleetwood and Green move toward resurrecting them.