Pondering the point of living large at Hearst Castle

The estate at its height consisted of 250,000 acres, bought at 70 cents per. The property featured its own airfield, a mile-long pergola planted with fruits, vines, and espaliered trees, and a private zoo that was at the time the largest in the world.

A couple of weeks ago I traveled north, boarded the bus at the Visitor’s Center, and gawked for the 5-mile-long trip up the driveway. I was there for the special Art of San Simeon Tour, which costs a hundred bucks, has an eight-person max, and lasts 2 hours, 15 minutes.

We started at the 104-foot-long Neptune Pool, the third incarnation of this luxe water-frolicking venue (Hearst, who as a child asked his mother to buy him the Louvre, changed his mind often). We learned of the Vermont marble, the Roman Empire-era columns, the statues that are a mixture of the ancient and the modern.

Next stop was the eight-bedroom Spanish-Moorish “Casa del Sol,” one of three “guesthouses,” any one of which would have sumptuously housed a giant family. Bob and Dolores Hope, stargazer Edwin Hubbell, and many other luminaries stayed here.

The Castle, aka Casa Grande, was built in the Mediterranean Revival Style between 1919 and 1947 by Hearst and his architect Julia Morgan.

In the kitchen, we toured the pastry station, the liquor cabinet with its very cool vintage cocktail shakers, the 12-foot-long nickel and copper alloy warming tables. (The full Castle staff ran to around 150.)

We moved on to the refectory, with its four 17th-century Italian wood tables laid end to end (Hearst held court from the middle), its Renaissance-style chairs upholstered in rose-colored velvet, its impossibly high windows. The adjacent Morning Room has a Spanish inlaid ceiling that is currently being cleaned and restored. The work is expected to take 10 years. 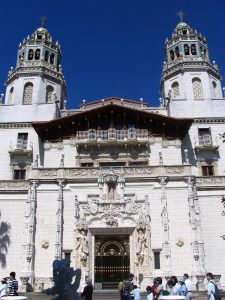 So did brocaded vestments, sacristy doors (a pink one serves as the entry to the bathroom in the Doge’s Suite), mosaic tiled floors, encrusted chests, sconces, carved bedsteads, gilded mirrors, armoires.

The fourth-floor Celestial Suite, at the base of the Southern Bell Tower, I mentally claimed as my own. Its small, tiled triangular balcony would have been perfect for hiding out from the constant construction noise. For all its splendor, interestingly, the Castle remained unfinished.

The North Upper Duplex, one of four lofted rooms, boasts the oldest tapestry in the house: a late 14th-century French work depicting Christ walking on water.

Also, interestingly, Hearst was surrounded by Catholic art and apparently remained untouched by the people and stories depicted in it.

Around 1920, he hooked up with Hollywood starlet Marion Davies, 30 years his junior. His wife, Millicent, refused to divorce him, so he and Davies (Hearst’s “hostess,” as the docent referred to her) never married. The third floor was Hearst’s exclusive domain and housed his library, his and Davies’ bedrooms, and the Gothic Suite sitting room.

The Assembly Room, with its teak floors and 16th-century Flemish tapestries — one designed by Rubens — was where guests gathered to drink cocktails, play Monopoly, and dance. Hearst frowned on over-imbibing and, according to the docent, expected his guests to mingle, play sports, and be entertaining.

What a drag, I thought, hanging over a balcony after the tour had ended and gazing out at the Pacific. It’d be one thing if you were free to wander off by yourself, drink in the beauty, and ponder. But to be forced constantly to mingle would have struck me as very much like work.

The tour was wonderful. The art and grounds were a delight. But meandering the 127 acres of landscaped esplanades, terraces, and walks afterward, I couldn’t help musing: To what end?

Somewhere along the line the zoo animals had been sold off or donated, the airstrip disassembled, the warming tables unplugged. The wine cellar’s grand cru bottles had slowly turned to vinegar. In 1957, the whole shebang had been turned over to the State Park Service because the Hearst Corporation could no longer afford the taxes and upkeep.

Eleven weeks after Hearst’s death in 1951 Davies re-married — as it turned out, unhappily — and died, some say an alcoholic, at 64. Today an entire local economy — hotels, restaurants, gift shops — has sprung up around the Castle. A few zebras still roam the hills.

How ironic that the town of San Simeon is named after a “pillar hermit”: a Syriac ascetic saint who achieved lasting notice for living 37 years on a small platform on top of a pillar near Aleppo.

Finding a natural adrenaline in the wild

Saints of the day: Martyrs of Damascus