New Vatican missionary chief could be pivotal player on China

In the abstract, one could make the argument that the emergence of China as a global superpower, and how it chooses to exercise its expanding political and economic influence, is the most important geopolitical drama of the 21st century.

If China is the world’s most crucial new “hard power,” the Vatican remains its most influential “soft power,” meaning the premier voice of conscience on the global stage and the lone entity recognized as a state under international law with no real national interests to defend.

The evolving relationship between Rome and Beijing, therefore, could be part of the century’s most important strategic storyline.

In that drama, a potentially important new player is now set to enter the stage.

On Dec. 9, Pope Francis named 62-year-old Cardinal Luis Antonio Gokim Tagle of Manila in the Philippines as the new prefect of the Congregation for the Evangelization of Peoples (a position commonly referred to as “the red pope”), the Vatican’s primary missionary department, which is still better known around the Catholic world by its old Latin name, “Propaganda Fidei.”

Most attention among Vatican-watchers has focused on how the appointment strengthens Pope Francis’ hand in his own shop by putting another staunch papal loyalist in a key position, and also boosts Cardinal Tagle’s own stock as a possible successor somewhere down the line.

A bit overlooked, however, is that Cardinal Tagle’s new post also makes him a key figure going forward in Vatican-China relations.

To begin with, Cardinal Tagle has Chinese roots. His mother, Milagros Gokim, was the daughter of a Chinese migrant who came to the Philippines with his brother on a business trip and stayed in the country, eventually marrying a woman, Tagle’s maternal grandmother, who was also of mixed Filipino-Chinese ancestry.

In a 2017 book, Cardinal Tagle was interviewed about his Chinese roots.

“I think some Chinese characteristics have passed onto me, even though my grandfather spent most of his life in the Philippines,” Cardinal Tagle said. “I remember certain practices he observed, such as honoring his mother by offering her food, putting it in front of her photograph, with a few sticks of incense, or setting off fireworks to welcome the New Year, or offering a lot of food during family meals.”

Cardinal Tagle said his grandfather also passed on other typically Chinese traits, such as “respect for the old and family loyalty, living simply while focusing on the essential, the value of education, and work done in an ethical way based on right motivation, diligence, and trust.”

At 9 years old, the cardinal said, his grandfather pressed him to learn Chinese and he took private lessons in both Mandarin and the local Filipino dialect. For a time, he said, he was advanced in his studies, but eventually stopped going to his tutor and now said he “regrets” not pressing ahead.

In that sense, Cardinal Tagle’s biography makes him part of a sort of Chinese diaspora in the Philippines, which is among the largest overseas Chinese populations in southeast Asia.

Further, as a Filipino, Cardinal Tagle does not carry the baggage in conversations with China that a Westerner might. Relations between China and the Philippines are generally good; China is the Philippines’ top trading partner, reaching $55.7 billion in 2018, as well as the largest import-export market for Filipino goods and the second-largest source of tourism in the Philippines. China also pumped $66.2 million worth of foreign investment into the Philippines in 2018.

On another level, Cardinal Tagle’s post at the Congregation for the Evangelization of Peoples positions him to be an important player in Vatican-Chinese relations. 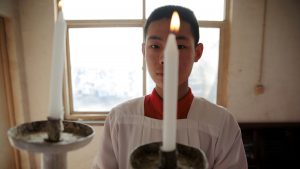 An altar boy holds a candle in preparation for a Palm Sunday procession at a Catholic church in China's Youtong village. Catholics in Macau, Taiwan and Hong Kong are divided over the provisional agreement between China and the Vatican. (CNS photo/Damir Sagolj, Reuters)

Technically, the Congregation for the Evangelization of Peoples ceased to have direct control over ecclesiastical affairs in China in 1946, just before the Communist takeover in 1949, when the Vatican recognized China as a national church in its own right.

However, the missionary department nonetheless remains engaged in conversations about the Catholic footprint in the country, and also exercises broad leadership over Church affairs across Asia.

Last September, for instance, the Congregation for the Evangelization of Peoples officially erected a "Redemptoris Mater  College for Evangelization in Asia," based in Macau, with responsibility for preparing future priests formed by the Neocatechumenal Way for evangelization across the Asian continent.

As a result, and given the trust Cardinal Tagle enjoys from Pope Francis, it’s impossible not to suspect that he’ll have an important seat at the table when significant Vatican decisions vis-à-vis Beijing are made.

In general, Cardinal Tagle is seen as a political moderate and a man of dialogue, meaning he’s likely to uphold a broadly dovish line on Chinese relations, as opposed to hawks, such as retired Cardinal Joseph Zen of Hong Kong, who believe the Vatican ought to be tougher with China on religious freedom, the Hong Kong protests, and a number of other fronts.

In a recent interview, two experts on Vatican-Chinese affairs said Cardinal Tagle might bring a breath of fresh air.

Cardinal Tagle “might be able to help with the facilitation” of the Vatican’s China question, said Paolo Affatato, head of the Asia desk for Fides News, adding that the appointment could provide “more open doors.”

Likewise, Father Bernardo Cervellera, head of Asia News and a longtime expert on Chinese affairs, said Cardinal Tagle could help advance relations with China, “not so much because of the Chinese blood, but because of his intelligence and his attitude.”

It remains to be seen if the sort of “Ostpolitik with an Asian face” represented by Cardinal Tagle will be the key that unlocks the China conundrum for the Vatican, paving the way for a long-awaited deal on full diplomatic relations between Rome and Beijing, a desideratum for the Vatican that goes back far before Pope Francis was elected, and which has become effectively the cornerstone of its Asia policy.

What’s unmistakable today, however, is that Rome’s road to Beijing now runs through the Philippines and its ethnically Chinese native son.