ROME — On Aug. 26, the Vatican announced that Pope Francis will resume holding public general audiences on Wednesdays beginning Sept. 2, after almost six months of livestreaming them without any faithful present amid coronavirus (COVIS-19) lockdowns.

Since the era of St. Pope John XXIII in the early 1960s, the Wednesday audience has been one of just two occasions every week when a pope appears in public, the other being his noontime Sunday Angelus address. Since the Wednesday audience normally is devoted to catechesis, it’s also an important “teaching moment” for any pontiff.

So, is this a sign that things for the papacy are getting “back to normal”? Sure, but maybe not in the way you might think.

For one thing, the audiences are not being held in St. Peter’s Square, which can contain more than 300,000 people, but in the Vatican’s Cortile San Damaso, a much smaller space within the Apostolic Palace typically used to greet visiting heads of state. The plan is to provide seating for just 500 people in order to limit crowd size and maintain social distancing protocols.

The move comes as Italy faces a new spike in coronavirus cases. On Aug. 27, the country recorded 1,411 new infections, the highest total since early May, though just five deaths.

In another change, no tickets are being issued. Though admittance has always been free, in the past people could sign up for tickets that guaranteed them a seat. Now doors will open at 7:30 a.m., and once the 500-person limit has been hit, no one else will be allowed in. 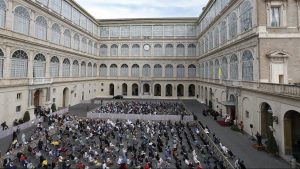 Pope Francis leads his general audience in the San Damaso courtyard at the Vatican Sept. 2, 2020. It was the pope's first public audience with pilgrims in six months. (CNS photo/Paul Haring)

In other words, this is a return to normality, but to the “new normal” of a pandemic-conscious world rather than business as usual.

The resumption of audiences can’t help but beckon the question: Does this mean the pope is going to start hitting the road again as well, making pastoral visits all around the world? Here too, the answer is likely to be a post-pandemic “Yes, but.”

For the moment, there’s no overseas trip on the schedule for Pope Francis in 2021. In early February the Vatican announced that he would travel to Malta in May, an outing that had to be canceled, and he was widely expected to visit Indonesia and East Timor later this year, though that now seems unlikely, too.

Even before the coronavirus hit, Pope Francis told a small group of Iraqi pilgrims visiting Rome that he wouldn’t be able to fulfill his desire to visit the country this year, presumably due to security concerns.

At this stage, the logistics of putting together a full-scale state visit to another country, including the challenges of crowd control amid restrictions related to the pandemic, render any such outings improbable.

Of course, a quicker and less formal visit someplace remains possible. In fact, we’ve already seen one such papal trip in 2020, albeit one that didn’t involve Pope Francis. In late June, Pope Emeritus Benedict XVI made a private visit to his home in Germany to visit his dying brother, spending five days there before returning to Rome without any public appearances or events.

Pope Benedict’s trip could provide a model for a few quick-hit private outings by Pope Francis as well. It was organized and announced only at the last minute, and it avoided the large gatherings that remain sources of concern for public health officials struggling to prevent new outbreaks of the virus.

As for 2021, it’s worth recalling that Tedros Adhanom Ghebreyesus, head of the World Health Organization, recently said it could take about two years to contain the coronavirus, and technological advances since the 1918 Spanish Flu pandemic have been offset by greater social mobility, meaning greater connectivity and more chances for a virus to spread.

If full-blown papal trips, with large public Masses and other events, remain impossible through 2021, what then?

Well, Francis would turn 85 in December 2021, and it’s anyone’s guess what his physical condition, and therefore his capacity (and appetite) for travel, might be at that stage.

Recall that when Pope Francis was elected, many who were close to him in Argentina predicted he wouldn’t travel as much as his immediate predecessors, especially the legendarily peripatetic St. Pope John Paul II. As Cardinal Jorge Mario Bergoglio, the future pope was well known for his aversion to packing his bags, jokingly referring to an annual outing to Rome as a form of “penance.”

In office, Pope Francis turned into something of a road warrior. Last year he made seven overseas trips, visiting 11 countries on four continents. That equaled St. John Paul’s biggest number of trips in a single year, which came in 1982 and which also took the Polish pope to 11 nations. (Ironically, St. John Paul’s peak year took him to Argentina, whereas Pope Francis still has not made a homecoming to his native country.)

It could be that not having traveled much for almost two years, an older Pope Francis in 2022 might decide that he doesn’t need to hit the road as often, or that he doesn’t want to, at least not in the same fashion as a grueling state visit.

Such an inclination may be buttressed by the Vatican’s financial situation, with ballooning deficits right now already forcing drastic limits on travel by officials below the pope. Granted, most of the costs of papal trips are absorbed by local churches and governments, not the Vatican, but most are struggling with their own pandemic-related financial shortfalls.

To sum up, the “new normal” of papal travel could be fewer trips on a small scale. We may hear about a trip only shortly before it happens, few people may be able to see the pope in person, and the amount of time he spends on the ground could be shorter than the hours in the air it takes to get there and back.

Whether such a new normal is good or bad — a welcome slimming-down of the “imperial papacy,” or an unfortunate withdrawal from the unique capacity of a pope’s physical presence to inspire people and peoples — is a matter of opinion.

In any case, it’s a reminder that sometimes change comes from within, and sometimes it’s dictated by circumstance. How Pope Francis navigates the circumstances he’s now facing will be fascinating to track.