In a scene within a scene, Morgan Freeman reprises the role of “Quincy, M.E.,” but plays the crime-solving pathologist as “gender fluid.” While dissecting a cadaver, he instructs his increasingly confused young assistant in the pronouns and nongender specific language of transgender ideology.

One doesn’t say “daughter.” One says “child,” and grandpa becomes grandzaza (less gender specific, Quincy explains.) As for the “Toy Story” astronaut Buzz Lightyear, he is “totally cisgender, gynosexual at the very least.”

After the scene, Morgan Freeman asks Sandy Kominsky (played by Michael Douglas) if he understood what was being said. When Sandy says not really, Freeman blames it on the writers, calling them “bullies.”

When it comes to the transgender wars, everyone is feeling a bit bullied these days.

On the one hand, those experiencing gender identity issues feel bullied by violence targeting transgender people as well as by a political backlash that wants to ban the use of pronouns not related to biological sex and the use of bathrooms conforming to their gender identity.

On the other hand, transgender critics not only feel a bit bullied by the pronouns and jargon that “Kominsky” mocked, but they are also increasingly concerned about transgender rights language being inserted into legislation that may eliminate conscience protections for doctors and others who refuse to perform or endorse gender reassignment surgery.

When Amazon refused to sell Ryan Anderson’s critique of the transgender movement, “When Harry Became Sally: Responding to the Transgender Moment,” it rang alarm bells.

Into this fraught ideological battlefield, Catholic churchmen have gingerly stepped, trying to balance concern for individuals they see as suffering from “gender dysphoria” while at the same time rejecting the willingness to use hormones and surgery to change one’s “gender assigned at birth.”

More broadly, Church leaders warn of the dangers of a “gender ideology,” the intellectual severing of gender from biological sex, making one’s identity fluid and a matter of choice rather than a gift given to us by God.

Bishop Michael Burbidge of the Diocese of Arlington is the latest to address the subject, publishing “A Catechesis on the Human Person and Gender Ideology” (Diocese of Arlington, Virginia), Bishop Burbidge expresses sympathy for those suffering from gender dysphoria, which he defines as “a psychological condition in which a biological male or female comes to feel that his or her emotional and/or psychological identity does not match his or her biological sex and ‘experiences significant distress’ as a result.” 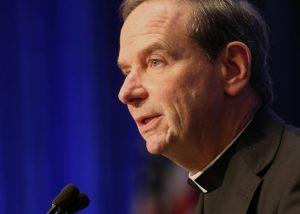 Bishop Michael F. Burbidge of Arlington, Va., is seen in this 2016 file photo. He published "A Catechesis on the Human Person and Gender Ideology" Aug. 12, 2021, after consultation with experts in theology, bioethics, clinical counseling, civil and canonical law, as well as with priests. (CNS/Bob Roller)

While Bishop Burbidge says such cases “must always be addressed with pastoral charity and compassion,” he also says this response must be “rooted in truth.” He warns that “belief in a ‘transgender’ identity rejects the significance of the sexed body,” instead seeking “validation of the person’s self-defined identity.”

While school boards to statehouses do battle over the political implications of the gender wars, there is a similar battle over the medical implications. A mini-industry of sorts has sprung up offering “gender affirming” treatments such as surgery and drugs to address the internal confusion that a person suffering from sexual dysphoria may be feeling. Critics cite studies that say most children experiencing gender identity issues outgrow them by early adulthood and warn against early interventions that are nonreversible.

“Under no circumstances should parents seek ‘gender affirming therapy for their children,’ ” Bishop Burbidge counseled.

Culturally, however, the transgender movement is having its moment. Pop stars like Demi Lovato confess to being “non-binary” and ask that their identifying pronoun be “they.” The rebranded Victoria Secrets has reportedly hired a transgender model, and Rachel Levine as a transgender health official was confirmed in March as assistant secretary of health for the Biden administration.

In this environment, the Church (as usual, some might say) finds itself in a difficult situation. Bishop Burbidge urges parents to “resist simplistic solutions presented by advocates of gender ideology,” but he also stresses that “the Church does not teach that people who experience gender dysphoria or confusion are immoral or bad,” and that it is “essential” that whoever works with people experiencing such confusion “listen and seek to understand their experiences.”

As Pope Francis himself acknowledges in “Amoris Laetitia” (“The Joy of Love”), “It is one thing to be understanding of human weakness and the complexities of life, and another to accept ideologies that attempt to sunder what are inseparable aspects of reality.”

Greg Erlandson is the president and editor-in-chief of Catholic News Service.