First of all, you’ve got the drama of the very first time that a cardinal of the Catholic Church, and a consummate Vatican insider at that, stands in the dock in a Vatican court facing criminal charges. Moreover, this story is already worthy of a Verdi opera, with a sprawling cast of colorful characters and a series of surreal plot twists.

All that means there’s a great deal of heat around the trial, which is now adjourned until early November. But the real question is whether, by the end, the trial also will generate its fair share of light.

We don’t yet know how things are going to shake out, in part because right now the process is bogged down in pretrial considerations centering on discovery, i.e., which materials the prosecution is required to turn over to the court and to defense lawyers. (As a footnote, there are roughly 30 such attorneys representing 10 individual defendants and a handful of corporate entities, which surely has to mark an all-time record for the Vatican tribunal.)

What we can do right now is identify three mistaken conclusions about this trial, which are easy to fall for, but misleading and dangerous.

Upon hearing the news in 2019 of a new Vatican scandal involving the Secretariat of State’s attempt to use about $400 million to buy a former Harrods warehouse in the posh London neighborhood of Chelsea, which was initially set for conversion into luxury apartments, many people were shocked that the Vatican was playing global real estate markets at all.

Compounding the outrage in Catholic circles was the realization that the funds in question came from Peter’s Pence, an annual collection around the world in which ordinary Catholics are urged to give money to the pope — generally under the pretense that it’ll go to feed hungry babies in Africa and other works of charity.

In reality, it would be a terrible mistake to conclude that the Vatican shouldn’t be doing things like this.

In all honesty, the mistake here wasn’t making the investment, but in choosing the wrong people to run it. In principle, this should have been a can’t-miss proposition: Luxury apartments in Chelsea are only going to grow in value, and, done right, the Vatican easily could have doubled or tripled its original outlay over a relatively short span of time.

In an era of declining resources and COVID-driven limitations, that sort of shrewd investing strategy amounts to good stewardship. Pope Francis said as much in a 2019 news conference on his way back from a trip to Japan, when asked about the London scandal.

“When the money from Peter’s Pence arrives, what do I do? I put it in a drawer? No. This is bad administration,” the pope said.

“I try to make an investment and when I need to give, when there is a need, throughout the year, the money is taken and that capital does not devalue, it stays the same or it increases a bit. This is good administration.”

He was right then, and he remains right now, however embarrassing the execution of the London deal turned out to be. 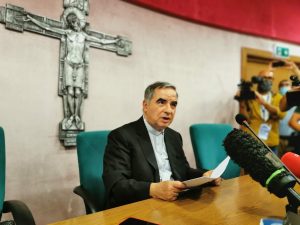 Second mistake: The trial as referendum

Many commentators see the Cardinal Angelo Becciu trial as a litmus test for broader shifts in the Church — another nail in the coffin of clericalism, for example, or the success of Pope Francis’ broader financial reform campaign, or the integrity of the Vatican’s criminal justice system.

All those things may indeed be on the line, but experienced jurists will tell you that as soon as a trial is perceived to take on larger social and cultural meaning, logic and evidence tend to get lost in the shuffle. Anyone remember the O. J. Simpson trial, for instance?

In reality, this trial is supposed to be about one thing only: Are the defendants actually guilty of the crimes with which they’ve been charged?

If the court manages to stay focused on that one question, the larger significance of the effort will sort itself out. If the actors in the drama insist on seeing it in vaster terms, it could well collapse under its own weight.

Third mistake: Focusing on the cast, not the plot

Honest to God, a Hollywood central casting studio could not have picked a better set of archetypal villains for this production.

You’ve got the 73-year-old Enrico Crasso, who oversaw the Vatican’s investment capital with Credit Suisse, who, in his French cuffs and expensively tailored suits, trips every negative stereotype ordinary people have about well-heeled unscrupulous brokers. Then there’s Msgr. Alberto Perlasca, the erstwhile architect of the deal who’s turned informant, and looks perfect for the Henry Hill character from “Goodfellas.”

The drama even has its own femme fatale in 39-year-old Cecilia Marogna, a personal friend to Becciu with an obscure background as some sort of international relations consultant who’s dubbed “the Cardinal’s Dame” in the Italian press.

At the center of it all is Cardinal Becciu himself, who once sat at the epicenter of power as the sostituto, effectively the pope’s Chief of Staff, and who absolutely incarnates images of the Vatican’s “old guard” — wedded to traditional ways of doing business, adept and bobbing and weaving during any effort at reform in order to ensure that, at the end, as the Italians say, everything changes so that everything can stay the same.

Yes, all that is fascinating. In reality, however, it has precious little to do with the job the Vatican tribunal has been asked to do.

Cardinal Becciu, for instance, may not be the world’s most attractive character, but that doesn’t axiomatically make him guilty of these charges. For example, it’s an entirely fair question to ask why he’s the only cleric of rank in the dock, while his boss, Cardinal Pietro Parolin, and his successor, Archbishop Edgar Peña Parra, so far have gotten off scot-free, even though they were arguably at least as hip-deep in the London deal as Cardinal Becciu.

To put the point differently, maybe the cast is the reason we tuned into this show in the first place. But sooner or later we need to move on to pondering the plot, or the real drama may come and go and we won’t even notice.