Making sense of those mixed feelings over the Roe v. Wade leak

How are you feeling about what appears to be the likely overturning of Roe v. Wade and Planned Parenthood v. Casey?

If you are pro-life, then this is likely a moment you’ve been waiting for for many years, perhaps many decades. Speaking personally, this fight goes all the way back to 1986 when Sister Celeste of St. John the Baptist elementary school in tiny Paris Township, Wisconsin, showed me what abortion was. What it really was. That is, the most horrific violence against the most vulnerable.

After I finished my master’s degree in theology at Notre Dame back in 2000, I wasn’t sure what I wanted to do with my life — but the minute I saw at advertisement for the position of communications director for Pro-Life Wisconsin I knew immediately this is something I wanted to do.

But, if you’re like me, this moment doesn’t necessarily feel as perhaps you imagined it would. Part of that, no doubt, is because the actual opinion has not yet been released. Back in 1992, Casey was decided when a justice switched his opinion at the last minute. We could have something like that happen again.

But something else appears to be at play as well.

For some, they feel embarrassed by the pro-life movement. They can rightly pick out prominent examples of pro-lifers being racist or otherwise hopelessly hypocritical when it comes to the protection of human dignity. Heck, a charter member of the Republican pro-life caucus, Timothy Murphy, was forced to resign after it was revealed that he pressured his mistress to — wait for it — have an abortion.

And then, of course, there is Donald Trump. Many pro-lifers (myself included) thought that he would be bad for the movement, both in the short- and long-term. We’ve been proven wrong about the short-term: indeed, we must be forthright that the fact that, without his election, the conditions for the possibility of fighting for prenatal justice would not have come to be. But there’s something, for lack of a better word, “tainted” about this victory coming from the presidency of a man who was so intimately involved with things like, say, using the pain of separated children to deter immigrants.

For others, the grueling attacks that pro-lifers face, particularly online, can just wear on your psyche. How many times can one be publicly told that they are a ****ing fascist who wants to enslave women; or that because of their sex or race they had better shut up about this and let other people speak; or have others hope that they are raped and must keep the rapist’s child — before it begins to impact your sense of self? It takes pretty thick skin to remain in such an arena. 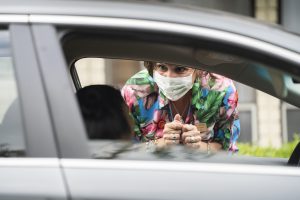 But there’s also another reason, I think, for maybe not feeling unserved joy at this ruling: we are really only at the end of the beginning of this fight.

Someone recently asked me how I feel about the likelihood of Roe/Casey going away. After thinking about it for a bit, I decided that I’m feeling a set of emotions similar to those had by someone who, say, makes the varsity sports team, is cast in the school play, or gets accepted to college.

There is joy, to be sure, but it is mostly relief that you’ve reached some kind of “end of the beginning” threshold. But there’s also a sense in the back of your mind that “now the real work begins,” leaving little time to celebrate.

So, if you aren’t feeling unserved joy, maybe that’s because you realize that the fight for mothers and their prenatal children now turns to the states. And it will be ferocious. California, to put it mildly, has much work to do when it comes to protecting babies from violence. As does New York and many other states. With the abortion pill, RU486, arriving in earnest in the United States, we are presented with a whole different set of issues to contend with.

There is just so much work to do.

That said, if this decision turns out as we think it might, pro-lifers should take some time to pause and celebrate a great and necessary victory. So many people have been working for this moment for so long. Think about the billions of unpaid volunteer hours that have been spent doing this work. Think about the blood, sweat, and tears (lots of tears) that have marked our path. Think about the many massive failures, of many different kinds, that preceded this moment.

That history is full of real people who have gone before us in the struggle for fundamental human dignity. Surely, they are looking down at us now, pro-lifers, with encouragement. Like them, we will need to pray for our strength to endure in the struggles to come.