Locked down in Assisi

Lori King, professor of theology, is a U.S. citizen living in Assisi, Italy. She’s been confined to her home since Sunday, March 8, at 9 p.m.

We connected recently via phone.

“Even before the lockdown, Mass had been suspended. I’d gone to 6 p.m. Mass at the Cathedral of San Rufino, my home parish. When I came home, a letter inside the door from the bishop announced that all Masses and public liturgical functions were being suspended until April 3.

“I felt as if the wind had literally been knocked out of me. I thought, ‘This can’t be happening.’ ”

But by the next day she’d settled into a different rhythm. The lack of social opportunities and work obligations freed her to devote herself fully in prayer to the crisis at hand.

“I’m very privileged to be here during this. I’ve always said that in any kind of major world crisis, I’d want to be in Assisi. And here I am.” 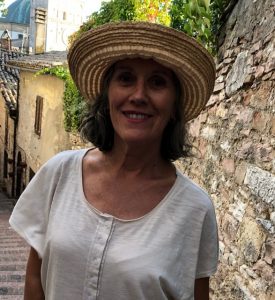 The church bells still ring the Ave Maria for the Angelus at noon and at 6 p.m. for Vespers. She has a terrace that has the Cathedral of San Rufino on one side and the Basilica of St. Clare on the other. Off in the distance she can see Rivotorto, which is the first place St. Francis lived with the brothers.

“I can also look across from my balcony to the priests’ residence and I know that in their private chapels at San Rufino they’re offering the Mass. That’s going on all over Assisi, I’m sure, with the friars, with the sisters. That’s a great solace.”

King generally walks the 20 minutes or so for groceries near the Basilica of St. Francis, which allows her at least a bit of time outdoors. Some of the churches remain open and residents are also allowed to go in and pray.

The mayor posed the quarantine as a sacrifice for the elderly and those who were most vulnerable, and the notion took hold very quickly. “The Italians have suffered. Their suffering from the war is not far from their collective memory. This is just who we are, is the thought. We’re used to this. We survive this way.”

Other than the first night the announcement was made, she’s seen no evidence of hoarding.

“And trust me, the Italians love their food! But what’s important here is the human contact, the relationships. I can’t go anywhere in Assisi and have a conversation with anyone who knows me without being asked, ‘How’s your son? How’s your mother?’ ” 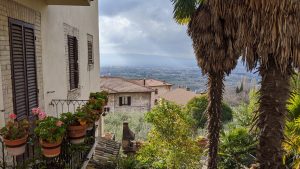 Italy may also be a little further ahead than the U.S. in that they’re already taking a step back and looking at the pandemic from a philosophical, theological sense. We’re poised for transformation, people are realizing. What is it going to look like on the other side?

Even the visual of the coronavirus is interesting: “corona” in Italian is “crown,” which evokes the Crown of Mary, with its 12 stars. King recently spoke to a Benedictine, the former abbess of a community in Ireland.

“This abbess noted that at the end of the Easter octave, the sisters form a half-circle and pray the ‘Corona,’ the Rosary. Her pastor is saying, ‘We pray the Corona to fight the corona.’ ”

Another friend, slightly cynical, scoffed, “But all the viruses, under a microscope, have spiked crowns.”

Responds King: “Right, but none of them have been named the coronavirus. There is something mystical about it.

“I don’t like spiritualizing things too quickly, because it’s insulting to the human suffering that’s going on. But at the same time too many things are happening around the world for this all to be a coincidence: the wildfires, the crazy temperature patterns, that terrible tornado in Nashville.”

Also, why now? The virus could have surfaced in the fall, but instead it took hold just as Lent began.

“What do we say at the beginning of Lent? ‘Return to me, with your whole heart.’ ”

She feels that in the mystery of God’s plan, she is right where she’s supposed to be.

“God is either everything or he’s nothing. God is way bigger than COVID-19. People who have lived a life of surrender to God and knowing their utter dependency on God can shore up the other people who are spinning.

“The widespread panic comes from a spiritual malady or weakness. St. Augustine says, ‘Anyone who grows cold in love is sick in the Body of Christ. True health of the body is found in the unity of its members.’ ”

One temptation to avoid during the crisis will be to distract ourselves. “Check in with each other, but let’s not fill up this precious time that we’ve been given with too much texting, emailing, and news-watching.”

Psalms and Scripture have become ever-more relevant. A recent reading, King points out, uncannily echoes the major hygiene dictate of the day: “Resist the devil and he will take flight. Draw close to God and he will draw close to you. Cleanse your hands, you sinners. Purify your heart you backsliders. Be humble in the sight of the Lord and he will raise you on high” (James 4:7-8, 10).