Living the gospel on Down Home Ranch

Judy Horton is co-founder, along with her late husband, Jerry, of Down Home Ranch, a residential care facility outside Austin, Texas, for those with intellectual disabilities.

After her first marriage ended in divorce, Judy married Jerry in 1973.

Ten years later, her three kids from her first marriage were 16, 20, and 24. She and Jerry were looking forward to an empty nest, a new leg of the journey.

In spite of her age, she refused amnio. “Strangely enough, I was pro-life, even as a radical left-wing hippie.” Jerry, having no natural children of his own, was thrilled.

Kelly was born in 1984. “I saw right away that she had Down syndrome. Our pediatrician, a lovely young woman named Dr. Garcia, said, ‘I know this is so hard, but you’re gonna have the best time with this kid.’ ”

Jerry, a “proselytizing atheist” at the time, walked into the parking lot that night and prayed for the first time since he was 20. And his prayer was: “God, take this away, I don’t want this.”

“But a couple came to visit us in the hospital. They showed us pictures of their boy, who had Down’s. These structures of visiting families — we later did the same for others — are so helpful.”

And when things settled down, both Judy and Jerry fell in love with Kelly. “She was the best baby in the world: fat and bald and funny.”

When Kelly was around 4, they decided to look around and see what her life would be like as an adult. “And what we saw was horrible. We saw isolation.”

Finally, Jerry said, “Well, I think we should just build our own place.”

The couple had no money. They had no experience in building. They’d been attending the Episcopal church.

But around this time, they hooked up with a “cowboy priest” in a neighboring town. One day he overheard Judy talking to his secretary. “Damnation, honey,” he yelled. “Send that woman in! Sounds like these people are trying to live the gospel!” They received instructions, came into the Church, and soon after sent out their first fund appeal.

And Jerry caught on fire. He found a piece of rural property for $300,000 and formed a board, whose members signed on as guarantors of the mortgage. They sold their house in town, moved out into a little trailer, enrolled Kelly in the local school, and started doing what they could.

“The first summer we had two young men. I’d go pick them up in my car and we’d come out and collect berries, make jam, gather eggs. They loved it. We got a little grant we could pay them with.” 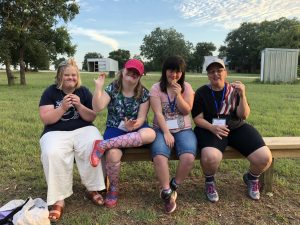 (Courtesy of Down Home Ranch)

Each year they had a few more people. After a while they decided to try a summer camp.

“We didn’t have diddly squat but we made do. We went to the National Guard and asked if we could borrow some tents. We got people from town to do crafts. We sang songs, I played the guitar. The guests had the time of their lives. And the parents were ecstatic. For some it was the first vacation they’d had in 20 years.”

The camps took off like wildfire. They considered what to do with all this beautiful land. They’d always envisioned a working farm and ranch. Over time, they built bunkhouses. They built lodges.

“Jerry turned out to be a genius fundraiser. People could not say no to Jerry. He’d drive all over Texas and Oklahoma making appointments with these huge philanthropic organizations that everyone said would never give us money. He once asked for a $60,000 grant and the people called and said, ‘We see you have a plan down the road for a pavilion. We want to fund that.’ That was a quarter of a million dollars. So it was God stuff all the time.

“Things always worked out. You look back and you see how it all fits together.”

In 2007, People magazine did a big piece, and the state decided Down Home was a congregate care facility and tried to pull its license. “The powers-that-be want everyone living in little apartments in the city that cost five or six thousand a month and where they’re for the most part completely isolated.”

Legal and administrative wrangling of various kinds continued for years. “But we did it. And the Ranch lives.”

Today Down Home Ranch, with 415 acres, 63 residents, and 15 large greenhouses, continues to evolve.

What would she say to the prospective mother who’s just discovered she’s carrying a child with Down syndrome?

“Almost always the child, him- or herself, brings the necessary healing. Because they just twine your heartstrings. Jerry and I were sitting in church once and the Gospel was forgiving 70 times seven.

“And Jerry leaned over Kelly and said, ‘She’s the only one who can do that.’ It’s true. There are a lot of things on that extra chromosome. One of them is stubbornness for sure. But another is just — ‘I love you.’ ”