Living in a B movie

As someone who spent too much time in a misspent youth sitting in front of a television set watching B movies, I never thought I’d be living through one. But that thought occurs to me on a regular basis as I commute to my day job, a drive that on its best day would take me 1 ½ hours is now covered in less than 45 minutes.

It’s beginning to feel a little weird, and reminiscent of one of the classic — and I use that term advisedly — B movies “Panic in the Year Zero.” It was produced in 1962 by the infamous American International company, notorious for churning out drive-in movie fare, usually with space aliens or some tawdry — by 1950s to early 1960s standards — movies aimed at teenagers. But now the film is looking clairvoyant.

In the movie, once A-list star Ray Milland is a desperate husband and father trying to find safety for his family after Los Angeles is nuked. The streets are desolate, stores have been looted, hope seems lost. Kind of reminds me of the last time I was at Costco. The goofiness and downright awfulness of the melodrama meant nothing to me as a kid watching this movie on the late show on TV. But it made a distinct impression on my hippocampus.

I think of this movie often now and its images of empty streets as I drive down the 405 every morning, with at least 25 car lengths between me and the next vehicle. It made me think of being in another kind of film from the past. National, state, and local governments spent a lot of money making public-service-type mini-documentaries in the past, usually hailing how spectacularly great national, state, and local governments were about a variety of public services they were providing.

I now imagine myself in one of these “educational” films as I motor along the now spacious 405 freeway with an imaginary narrator proclaiming how the travel of tomorrow has come to Southern California today. With its brilliantly laid out grid of super highways, commuters can traverse vast distances in record time, making their lives more meaningful, and of course adding to production by 37%.

Like every movie or television show that presents a view of the future, that future almost never delivers. Just look at vintage footage of a World’s Fair from the last century and their “city of tomorrow” exhibits: 1953’s idea of 1978 never sync up. The original “Blade Runner,” with Harrison Ford, was set in the dystopian future of 2019. Granted, there’s plenty of screwy things by 2019, but Los Angeles does not resemble anything like what the creators of that movie envisioned — yet. 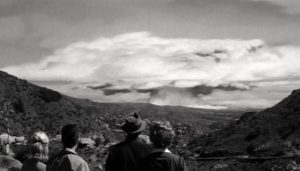 A scene from “Panic in the Year Zero.” (IMDB)

But we are beginning to look a little like a 1950s sci-fi movie now. If you told me a month ago I couldn’t get to church in my parish, or any parish, I would have scoffed at the notion. I can’t even get in front of the Blessed Sacrament for prayer and meditation. I can’t even play our family “bishop” card, as the Holy Father decided he needed to go and run another diocese and he is in the same lockdown scenario as the rest of us.

So why am I so calm? I’m really not. But when I begin to feel overwhelmed, I do have recourse: For me and my family, it has always been running straight into the arms of our Mother — our Blessed Mother. Call it a tribal knee-jerk reaction, but so be it. From the time we could walk and talk, our mom drilled devotion to Mary into our heads. To our mom, and to our dad, she was the go-to person if we were unsure, unwell, or alone.

It also doesn’t hurt to have a well-stocked DVD library. We have a son in Italy; he’s working for the Navy and is in good health and in good hands aboard the ship he is currently confined on. We have a daughter and grandson in Texas; her husband is in Iraq and is fine. And we have a son who is home. We are all safe and well, and we thank the Blessed Mother for that. If any of that changes within the weeks to come, we will thank the Blessed Mother again and ask her to put a word in for us to her Son.

In the meantime, we will hunker down, limit our exposure to news, and keep working through our collection of Marx Brothers movies, escapist fare, and work ever harder in keeping the Lord’s advice in our frontal lobes: “Be not afraid.”