It’s time to stand and fight for Catholic health care

A few weeks ago, I announced on social media that I was leaving my position at Fordham University. Though I’m grateful for my time at the Jesuit university of New York, after 14 years, it is time for another adventure. I’m moving on to teach at the Creighton University School of Medicine in Nebraska and St. Joseph Seminary in Dunwoodie, New York.

I’m quite fortunate to train future priests of the Archdiocese of New York in moral theology, but I’m equally fortunate to be teaching medical ethics at the largest Catholic health education provider in the United States. Creighton has just built a brand new school of health sciences education (in part due to an invitation for a dramatically underserved Latino community there). I’m very excited to fly once a month to teach medical ethics to first- and second-year students at a growing school that takes its Catholic mission and identity seriously.

While I did teach a lot of medical ethics to undergraduate and graduate students at Fordham, I see this new professional move as a way to explicitly support Catholic health care in the United States. Its footprint is already quite substantial: 1 in 7 hospitals are Catholic and 1 in 6 beds are in a Catholic facility. 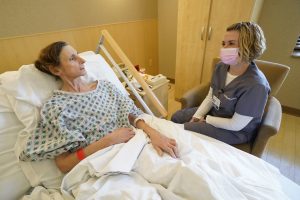 These facilities can be a deeply countercultural force against the kind of secularized, consumerist medicine that sells out to throwaway culture, especially if they follow Catholic ethical and religious directives. From the way we give special preference to the poor, to the way we treat the elderly and disabled, to the way we treat those who are quite young, to the way we follow the science by respecting the bodily differences between women and men, a coherent vision of Catholic health care has a real chance to be a bulwark against some of the most concerning trends of our time.

I wanted to be on the front lines of these kinds of efforts.

But the very practice of a coherent vision of Catholic health care is under fierce attack from the current administration. This claim isn’t the special pleading of a Republican — I don’t have a partisan bone in my body — but rather a clear-eyed, sober take on what may be coming at any moment.

The Catholic Benefits Association (CBA) has been carefully studying the proposals coming from both President Biden’s executive orders and comments from the Department of Health and Human Services. In short, what seems to be coming is tying Medicare and Medicaid funding to accepting the administration’s favored views on gender and abortion — views that are diametrically opposed to a coherent vision of Catholic health care.

Doug Wilson, CEO of CBA, noted that the goal seems to be “to end Catholic health care.” He predicts that the likely requirements coming from the administration “are so far beyond Catholic teaching that Catholic employers of every sort would be faced with complying or shutting down.”

So much of this country’s health care was built by Catholic immigrants — especially by orders of women religious — who wanted to continue the millennia-old tradition of Christ-followers imitating their master by caring for the sick. Their legacy remains profound and must be defended. This is true because of the good that is being done today: millions and millions depend on Catholic facilities for care.

We’ve been a countercultural force in the past: from our very beginnings by resisting female infanticide to our contemporary moment making sure that the elderly were properly cared for during the pandemic.

It is time to step up to defend this legacy as an essential part of who we are as the Catholic Church in the United States. Given the forces currently being marshaled against us — and the harm they mean to do us — is it not dramatic to insist that the stakes couldn’t be higher. The very fate of Catholic health care itself may hang in the balance.