Inflation challenges the Church’s concern for both wallets and souls

ROME — When St. Pope Paul VI famously defined the Catholic Church as an “expert in humanity” in a 1965 speech to the United Nations, presumably he had in mind something along the lines of Vatican II’s declaration in “Gaudium et Spes” (“Joy and Hope”), that “the joys and hopes, the grief and anguish of the people of our time” are those of the Church as well.

The pontiff probably wasn’t thinking about something as prosaic as the inflation rate, but the plain truth of the matter is that right now, the Church is being squeezed by rising prices and stagnant income as much as anybody else.

The economic lay of the land is depressingly familiar.

In the U.S., the inflation rate is currently running at around 8.3%. Although President Joe Biden recently secured passage of his $430 billion Inflation Reduction Act, it turns out the economy can’t simply be bent to the will of legislators. August’s Consumer Price Index numbers showed continuing upticks in costs across a wide variety of basic goods, especially food, shelter, and medical services, despite the infusion of new public funding.

The “food at home index,” which is basically a measure of average grocery costs, is up 13.5% over the past year, the largest such increase since 1979 under the Carter administration, when the word “malaise” first entered American political argot.

Perhaps most worryingly, food, shelter, and medicine are precisely the goods people already living on the margins can least afford to do without, meaning rising inflation in those sectors amounts to a sort of indirect tax on the poor.

At one level, the impact of rising inflation on the Church can be measured in strictly economic terms.

Take the Vatican, where Spanish Father Juan Antonio Guerrero Alves, SJ, prefect of the Secretariat for the Economy, recently disclosed that despite aggressive cost-cutting measures that resulted in the Roman Curia spending $42 million less in 2021 than in the previous year, the Vatican is still being forced to sell off about $20-25 million of its patrimony every year to cover its deficits, which obviously isn’t sustainable over the long haul.

Father Guerrero warned that if something doesn’t change, over time the Vatican will find itself increasingly unable to deliver core services. Pope Francis, for solid pastoral reasons, also has shut off a couple of erstwhile revenue streams, such as the costs the Vatican’s main court used to collect for processing annulment cases. 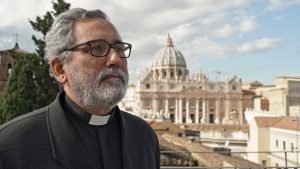 Jesuit Father Juan Antonio Guerrero Alves, prefect of the Secretariat for the Economy, is pictured near the Vatican in an undated photo. (CNS photo/courtesy Society of Jesus)

It doesn’t help that inflation in Italy is currently running at 8.4%, just about the same rate as in the U.S., meaning that the Vatican is paying the same inflated prices for basic goods as everyone else.

In the pastoral trenches, the reality is pretty much the same everywhere. Leaders in Catholic charities, for example, are reporting increasing struggles to stock food banks across the country, not only due to rising food prices but also downturns in charitable contributions as rank-and-file Catholics simply aren’t able to sustain the same level of giving.

When the Catholic Church hurts, everybody hurts. Catholic Charities USA runs more than 1,000 food banks in all 50 states in America, serving 8.4 million every year. That’s a staggering commitment, and if the Church were to be unable to sustain it, the social impact would be correspondingly mammoth.

Yet the impact of economic struggles isn’t felt strictly in terms of dollars and cents, but in all sorts of other ways, too.

One can certainly see it in the political arena.

Sweden, where inflation has reached a 20-year high at almost 10%, just elected a new government in part due to support from the “Sweden Democrats,” an anti-immigrant party long shunned because of its origins in neo-Nazi and far-right nationalist movements in the 1980s. It’s now poised to become the second largest party in parliament, vowing crackdowns on crime and sweeping new restrictions on immigration. It marks a dramatic course change for a country long known for being among the most welcoming in the world.

Beyond politics, the anxiety caused by economic difficulty also seeps into daily life.

In Italy, for example, public transportation workers — meaning the people who run the buses, subways, and trains — declared a national strike on Friday to protest a rising wave of attacks on personnel. It came after a ticket collector for the subway system in Milan was beaten up after chasing a guy who’d hopped over the turnstiles to avoid paying, and who later insisted that rising ticket prices are making it basically impossible for him to get to and from work. While most Milan residents didn’t approve of the beating, many said they could sympathize with the guy’s frustration. 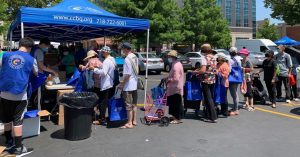 Neighbors patiently wait in line to receive fresh produce and food during a "Live it Up: Get Healthy, Live Well" event July 19, 2022, at St. Athanasius Church in Brooklyn, N.Y. (CNS photo/courtesy Catholic Charities Brooklyn and Queens)

All this may get worse before it gets better, especially if the war in Ukraine continues to drive rising energy costs and tightening food supplies.

What the landscape suggests for the Catholic Church, perhaps, is that inflation is both an economic and a spiritual challenge. While Catholic CFOs will have to figure out how to keep essential services going amid rising costs and declining revenue, pastors will be equally challenged to help people cope with anger, stress, and fear, forces that often don’t beckon the better angels of our nature.

In other words, inflation is a threat not merely to our wallets, but to our souls, and as an expert in humanity, the Church will be tested by its response to both.