In the footsteps of St. Kevin

Last month I spent three weeks in Ireland, dividing my time between Dublin and the Glendalough Hermitage, an hour south of the city.

Glendalough (meaning “valley of two lakes”) is an ancient monastic site and a former center of Celtic Christian spirituality. Pilgrims of various kinds, from all over the globe, descend here — especially in summer. The area is closely associated with St. Kevin, a seventh-century hermit who came to the valley seeking silence and solitude. Legend holds that he slept on a little stone shelf in the cliffs, by what is now known as the Poulanass Waterfall.

My own free-standing stone hermitage was run by the Sisters of Mercy and situated up on a hill, away from the traffic and crowds. That way, when I did visit the Monastic City, as it’s called, I could do so on foot, walking from town the long way around on a footpath called The Green Road that winds through forest, bracken and fern. 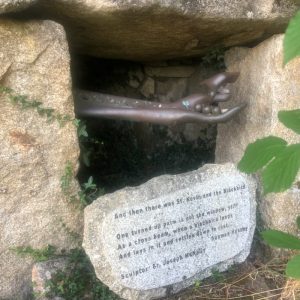 A sculpture by Brother Joseph McNally. According to legend, a blackbird once laid eggs in St. Kevin's outstretched hands. He stayed in the same position until the birds hatched. (Heather King)

While there, I visited the Monastery of Saint Saviour Church, the Round Tower, the Lower Lake, the Upper Lake, the site of St. Kevin’s Cell — an isolated perch beneath the trees far above the Upper Lake — and Reefert Church, where he is said to be buried.

I learned that the custom is to walk three times around a church before entering. I learned to honor a tree by walking around it clockwise — and what trees! Yews, rowans, silver birch. Tradition holds that when St. Kevin first arrived, 1,400 years ago, he first sought shelter under an oak tree.

The landscape and history are fascinatingly mysterious.

But when push came to shove, I found that I was just as happy at St. Kevin’s, the local parish, which was just through a wooden gate up from my hermitage.

In direct line of succession from the small community that gathered around St. Kevin in the sixth century, the church — stone with a slate roof — was built during “famine times” and opened in 1851. Under the aegis of Father Sean O’Toole, the parish priest in 2000, St, Kevin’s was restored to its original simple glory, and a meditation garden was installed. 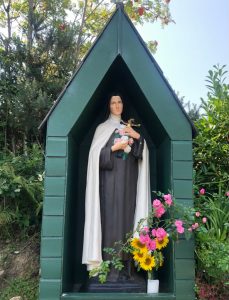 A shrine to St. Thérèse of Lisieux in the garden at St. Kevin Church in Glendalough Hermitage. (Heather King)

“The hermitage garden is designed to provide a place where nature, scripture, and Glendalough’s history are combined in harmony, delighting the eye, comforting the soul, and leading pilgrims to prayer and a deeper awareness of God,” reads the brochure.

That garden, including the cemetery out back, became a sanctuary during my two-week stay. Designed by Dublin-based landscape architect David Shortall, the space unfolds itself slowly. Many of its features — engraved reflections, stone markers, a shrine to St. Thérèse of Lisieux — were contributed by local artists or donated by local parishioners.

Pathway One — the way of Kevin — tells the history of Glendalough, which has included foreign invaders, internal tribal warfare, and fissures within the Church. Backbones of the community throughout the years — miners, foresters, and members of the faithful — are honored.

Tucked beneath a ledge, easy to miss, is a sculpture by Brother Joseph McNally — an elongated bronze arm, its palm cradling a clutch of eggs. Legend has it that as St. Kevin prayed in his cell one day, arms outstretched, a blackbird came along and laid her eggs in his hand. He stayed in the same position, his flesh a warm nest, until the fledglings hatched.

Pathway Two comprises a labyrinth, spiraling and green, the “lines” edged by boxwood. Path Three, The Path of Golgotha, consists of three “stations” inviting the pilgrim to reflect upon Jesus’ seven last words on the Cross.

Pathway Four is the Pathway of Choices. “The way that leads to destruction is wide and many take it,” reads one side of a granite marker leading up a set of wide wooden risers. “Enter by the narrow gate” reads the other, with a second, smaller path leading up to the right. The three overhanging yew trees represent the Trinity. A large boulder symbolizes the Resurrection. 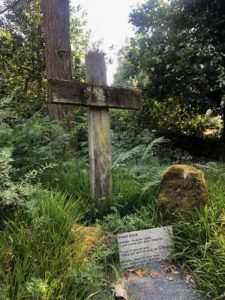 A cross on Path Three, the Path of Golgotha, in the garden at St. Kevin Church. (Heather King)

The whole garden is beautifully landscaped with trees, shrubs, and perennial borders. Sheep bleat from the pasture above. Along the back stone wall grow wild blackberries and old-fashioned flowers I remember from my grandmother’s house in New England: pinks, black-eyed Susans, bleeding hearts.

The ruins of the Monastic City tell one story. But it’s here, in the little parish bearing his name, that the body and blood for which St. Kevin laid down his life live on.

The sun sets late in these northern parts. Beneath the sheltering trees, I think of my own earthly pilgrimage and watch the light fade. A nearby engraving of an ancient Irish hymn reads:

King of the Friday

Whose limbs were stretched on the Cross

The bruises, the wounds, the loss

May some fruit from the tree of thy passion

Fall on us this night.