How Vatican II gave me two houses in the same home

I first became aware that we sometimes straddle different worlds at the same time when as a child I met one of my dad’s old friends who came to visit.

This guy was nothing like my dad. He was nothing like anyone I knew; in those days, that meant he wasn’t Catholic. He called my dad “Red,” which was something I never in my life had heard my dad called. I then learned that my gray-haired father once had wavy red hair and thus came by his nickname naturally.

As I got older and just a little wiser, I realized that my dad, as Catholic as anyone could get, also lived in different worlds simultaneously. He was comfortable with people who didn’t believe what he believed and had the gift of being able to assimilate without compromising his beliefs.

It is a sign of the times that I have found myself inhabiting multiple different worlds at the same time, and I have done so without ever fully feeling that I fit in any of them. When I was working in television, I never really felt part of the industry the way so many people I knew did (that might explain why I don’t have the Malibu beach house).

Even when I shifted gears and went to work at a very traditional and conservative small Catholic college, I felt I didn’t fit in. I didn’t possess the same amount of formal education as the freshmen there did, and I always felt I was flunking some kind of faith test.

If a global pandemic is good for anything, it does help concentrate the mind. As churches were closed, opened, and closed again, I started to think not that I didn’t belong, but whether I was belonging enough. I would not consider myself in the traditionalist camp of the Church, and I almost climbed over a desk at my son’s high school when, during a parent-teacher conference, I was accused of being a “cafeteria Catholic.” Cooler heads and my wife’s death grip on my forearm prevailed.

And about the time I began to wonder about fitting in anywhere, I happened upon YouTube videos from Bishop Robert Barron that reminded me there are no such things as coincidences. The bishop’s topic was the debate between celebrating Mass in the traditional “Extraordinary Form” and the post-Second Vatican Council “Novus Ordo” form.

In his videos, Bishop Barron explains why both are valid expressions of the Church, dismissing the intra-Catholic “liturgy wars” that have arisen since Vatican II. 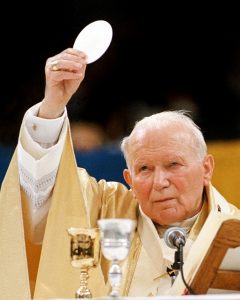 Pope John Paul II raises the Eucharist during the celebration of Mass in St. Louis during his last visit to the United States in January 1999. (CNS photo/Nancy Wiechec)

What got me thinking — more than usual — was Bishop Barron’s quoting St. John Henry Newman about how an animal must assimilate what he can and disregard what he must to survive. This, the bishop’s premise goes, is exactly what the Novus Ordo represents.

He’s right, but I think the Extraordinary Form is also assimilating things, just things from several centuries ago. The bishop’s main point, and the one that resonated for me, was the concept that these two expressions of the Divine Mystery were not an either/or proposition.

So, I attended a Mass in the Extraordinary Form provided by the Priestly Fraternity of St. Peter (FSSP), a traditionalist Catholic order whom Archbishop José H. Gomez welcomed to Los Angeles several years ago.

It was a little nostalgic, I must admit. I remember learning how to serve this form of the Mass as a sixth-grader, although I never mastered the Confiteor, and me and my best friend Timmy Bolger both had to rely on laminated cheat sheets.

It was more than just nostalgia though. It was almost alien at first, but it was profound and I felt I belonged. I have gone several times since then, and find the Mass to be a remarkable gift.

Still, I have not forsaken the Novus Ordo. Like Bishop Barron, I too believe that when done right, like the way St. Pope John Paul II celebrated this Mass, it is a wonder to behold. When I go to the Novus Ordo Mass, I have the same sense of belonging.

So, here I am once again straddling two different worlds, only when it comes to the holy sacrifice of the Mass, I may be in two different expressions of a sacrament, but it’s the same sacrament. It is still not an either/or question, but rather an either/and answer.

I remain the same imperfect creature seeking communion with God in either venue, and both present the same encounter with Jesus in his body, blood, soul, and divinity. And I fit like a glove in both.

Saint of the day: Andrew Kim Taegon and Paul Chong Ha-sang and companions