How to be a hobo for Christ

Meg Hunter-Kilmer, born in California in 1983, moved at six months to Arlington, Virginia. The family, nominally Catholic, attended Mass on Sundays and “that was kind of it.”

At her first confession, she racked her brains for a misdeed and, finding none, panicked and lied to the priest. She made up that she’d broken a cup and blamed it on her sister — and was thus “in a state of mortal sin from the age of 7. By the time I was 11 I was an atheist and thought anyone who believed in God was an idiot.”

But at a two-night confirmation retreat in early adolescence, she made another confession — and broke down sobbing.

“The tears may have started because of shame. But the spirit really led me to a spirit of profound forgiveness, of realizing my own brokenness and that God still loved me. I walked out of the confessional realizing, ‘This is real. And if it’s real, it’s worth living for.’ ”

She resolved to go to daily Mass, pray 10 minutes a day, and listen to more Christian music, “very 1997. I’m extremely stubborn and intellectually driven. There was a lot of pride tied up in my conversion and there still is. But there’s only so long you can be going to daily Mass, and praying the rosary and reading Scripture without some of it sinking in.” 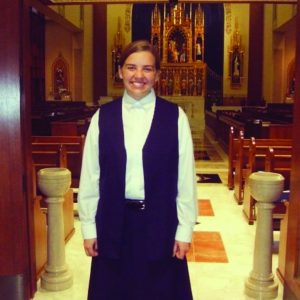 Meg Hunter-Kilmer after joining a Dominican convent. (Image via Facebook)

She took her dilemma to prayer. And the message she received, strange though it may seem, was an invitation to become jobless and homeless. “I’m a manager and a controller. I’m not the kind of person who moves into a car. But for me this is how discernment has always been. If I’m drawn to something that’s totally contrary to my natural inclination, I need to pay attention to that.”

Initially, she thought she’d be on the road for two months.

At first she stayed mostly with friends and, along the way, experienced unexpected healing. “My core wound is the belief that I have to earn love. But everywhere I went, people would say, ‘Don’t leave. Just move in.’ ‘You don’t have to earn love,’ the Lord was telling me. ‘You already are enough.’ ”

Before long she realized that she had enough friends and connections that she could sleep three nights here, four there, indefinitely. She realized that this itinerant life was to be hers for the foreseeable future.

But fairly quickly she also intuited the thin line between a pilgrim and a mooch; and perhaps between a calling and a schtick. So she started giving talks, and the talks became both a way to give back, and a guide to where she should travel next. 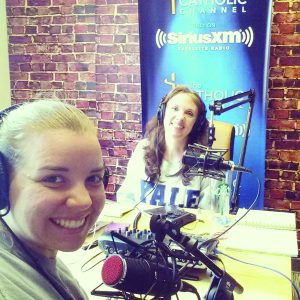 Meg Hunter-Kilmer as a guest on Jen Fulwiller's radio show. (Image via Instagram)

In a typical (non-COVID year), she might speak 400 times, giving as many as 10 talks a day: parish missions, women’s groups, seminarians, and priests. She doesn’t charge.

As her online presence grew, she also went from staying with friends to “more with random people on the internet.”

In fact, her deepest work she now refers to as “couch ministry”: the private, after-hours conversations she conducts with the people who give her a bed and a meal. Strangers feel free to unburden themselves. “I’m not a natural listener: that’s a supernatural gift that’s grown. To love people in their brokenness is 100% grace.”

Hunter-Kilmer’s website is piercedhands.com. She’s a longtime weekly columnist for Aleteia and has two books on saints forthcoming in 2021. One is a beautifully illustrated children’s book; the other is aimed toward adults, with about half of the featured profiles being people of color.

“There’s a lot of difficulty. There’s no part of this life I would have chosen, except for him. And he’s worth it.”

She usually knows where she’s spending that night, but often has no idea where she’ll be in a week. Her prayer life is the one non-negotiable. “I’m flexible on spiritual reading but other than that, daily Mass, the Office, the rosary, I read through the Bible every year so I have a schedule for that. And then my holy hour is central.”

Still, she’s not attached to the vocation as lifelong. In fact, at this point she’d really love to live in one place, “but the Lord, to date, hasn’t given me anyplace else to go.”

The central question for this hobo for Christ has become the question we’re all invited to ask: “Am I ever going to allow myself to receive the fullness of God’s gifts? Or am I only going to continue grasping?”