How the coronavirus may reshape Pope Francis’ to-do list

ROME — Pope Francis suspended the activities of the Vatican City State’s tribunal Thursday, March 19, in keeping with similar measures adopted by the Italian government, as the latest step to combat the spread of the coronavirus (COVID-19).

In effect, the decision means that unless a criminal trial or prosecution is judged to be incapable of delay, it’ll have to wait.

It was one of the many examples this month of how things in the Vatican essentially have been frozen in place, from the sweeping reform of the Roman Curia Pope Francis has pledged to the long-awaited report on sexual abuse and misconduct allegations against ex-cardinal Theodore McCarrick.

Someday, however, the pandemic will ebb. When that happens, will the effect of the coronavirus be tantamount to a “pause” button, and we’ll just pick up the movie where we left off? Or, will the pandemic give the Vatican new priorities that would not have been the case without the shock of a global public health crisis, one which, to boot, is hitting his own backyard in Italy right now harder than anywhere else on the planet?

If it’s the latter, here are three areas in which Pope Francis may exit this crisis with a new sense of urgency.

Pope Francis has spoken in moving fashion about the importance of the elderly repeatedly throughout his papacy, and they’re obviously on his mind now. He began his daily Mass Tuesday by praying for them.

“I’d like us to pray today for the elderly,” the pope said. “They’re suffering in this moment in a special way, with a very great internal solitude and, at times, with much fear.”

Yet to date, it would be difficult to identify a major new pastoral or policy initiative from Pope Francis’ papacy regarding the elderly. But on the back of a history-making pandemic that targets the elderly in particular, that may change.

For example, once upon a time Pope Francis floated the idea of reconceiving World Youth Days as a festival celebrating the bond between the young and the old, but it remained a pious wish. The pope may want to revive that suggestion and start fleshing out what it might look like in a serious way. 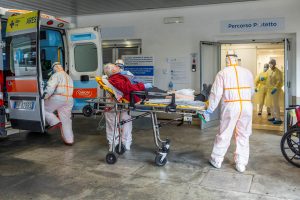 Medical workers at Gemelli Hospital in Rome wear protective suits as they attend an elderly coronavirus patient March 16, 2020. Pope Francis urged Christians March 17 to remember the elderly who are suffering not only loneliness but also fear due to the spread of the coronavirus. (CNS photo/Policlinico Gemelli, handout via Reuters)

Second, there’s the traditional concept of spiritual communion as well as home ministry.

Progressively, more and more Catholics around the world find themselves living in places where public celebration of the Mass and the other sacraments has been suspended, including the entire nation of Italy.

Thursday morning Pope Francis included a “fervorino” (“exhortation”) in his daily Mass, which is being livestreamed for people who can’t get out, on the idea of “spiritual communion,” meaning the grace that can flow from the mere desire for the Eucharist.

In recent decades, there hasn’t been a great deal of talk about spiritual communion, since in normal times what the Church wants is to get people to receive the sacraments, above all the Eucharist. The primary reason the Synod of Bishops for the Pan-Amazon region last October voted in favor of an expansion in married priests, for instance, was to be able to get the Mass and the Eucharist to isolated rural communities.

The coronavirus, however, is a massive wake-up call that there always will be circumstances in which, for reasons of health or other motives, you just can’t get the sacraments to some people, and it may prompt Pope Francis and his team to promote a deeper pastoral and theological reflection on spiritual communion.

On a related note, the coronavirus may also produce a boon in priests, deacons, lay ministers, and others committed to pastoral work with people restricted to their homes, including the elderly, the sick, persons with various disorders, and so on. Now that the world knows what it’s like not to be able to get out, concern for such persons may naturally grow.

Third and finally, health care may become a much greater social and political priority for Pope Francis going forward.

It was almost 60 years ago that St. Pope John XXIII defined health care as a “right” in his 1963 encyclical “Pacem in Terris” (“Peace on Earth”). “Good Pope John” listed a number of positive human rights, including “food, clothing, shelter, medical care, rest, and necessary social services.”

St. Pope John Paul II included health care in a list of rights alongside Social Security, pensions, and compensation in the case of accidents in his 1981 encyclical “Centesimus Annus” (“The Hundredth Year”).

The 2004 “Compendium of the Social Doctrine of the Church” also treated health care as among basic human rights such as “food, housing, work, education, and access to culture, transportation, basic health care, the freedom of communication and expression, and the protection of religious freedom.”

That teaching is thus on the books, but frankly health care has not been a signature issue for Pope Francis, who has focused instead on migrants and refugees, poverty, war and conflict resolution, and climate change.

Yet in the wake of a global crisis that has exposed deep inequities in access to basic health care, and which may make those disparities even more glaringly obvious should the coronavirus erupt in sub-Saharan Africa or Central America or more impoverished parts of Asia the way it has in China, Europe, and the United States, Pope Francis may feel compelled to emerge as the moral and spiritual tribune of a basic human right to medical care.

Time will tell if any of this comes to pass. It would be deeply odd, however, if the greatest cultural, economic, and public health shock in a generation didn’t have some impact on any pope’s to-do list.