How LA’s breads are bringing people together

“Kneaded: LA Bread Stories” is an online project sponsored by the LA Museum of Natural History.

Through videos, photographs, and written interviews, the offering celebrates LA’s history, heritage, and communities through the lens of bread.

Visually appealing, easy to navigate, the site makes you feel as if you’re walking through a giant strip mall with a fantastic mom-and-pop shop behind every door. The colors, layout, visuals, and excerpted quotes all pop. The mouth waters.

Here are Monica May and Kristen Trattner, co-owners of downtown’s Nickel Diner. In 2008 when the restaurant opened, they had three strikes against them: They were women, they were in Skid Row, and funding was scarce. They forged ahead anyway.

The diner’s buttermilk biscuits, derived from a recipe by May’s grandmother and ideally served with homemade strawberry jam, are a huge draw.

As her tattooed arms lovingly mix the dough she says simply, “Here’s my gift. This is what I do. I make a really good biscuit. They should taste like hot butter love.” 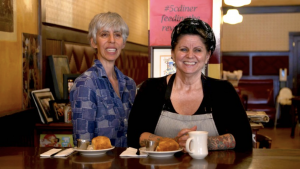 Adds Trattner: “Monica makes people think of their grandmothers with this bread. All different ethnicities hit the same note. You’re eating from women’s hands, and hands that have been trained by the women who came before her.”

Justine Hernandez, LA-born and bred, runs a vegan bakery called Just What I Kneaded in Frogtown, the neighborhood along the LA River between Silverlake and Atwater. Her wildly popular yeasted cinnamon rolls, again made with baking skills she learned at her grandmother’s knee, are delicious, gooey, sweet, spicy, and evocative of the guilty thought — maybe this is bad for me. Community builds around coffee and bread, Hernandez notes. “Bread is unpretentious and for everyone.”

When she was 14, Opportune Akendeu moved from Cameroon in Central Africa to LA. Starting African Chop — the only West African food truck in the city — was a life-changing event. Akendeu brainstormed ideas, accepted her friend Hector Tantoh’s funding, and the co-owned business was born.

Their signature dish is puff puff, a deep-fried dollop of batter and “the smallest, but the most talked-about item on the menu.” Still, getting them right is a delicate operation: puff puff needs to be golden brown, crisp on the outside, and as close to perfectly round as possible.

At a buck apiece, everyone can afford puff puff. “The one thing I always cry about and why I love Los Angeles is that the community we serve is not just one community … the African Chop Truck serves everybody.”

Ali Huynh, second-generation baker at Kien Giang Bakery in Echo Park, produces “bánh mì” rolls — soft on the inside, with a light and flaky crust — that are ordered throughout LA. “I love sharing our bread with other cultures and communities, and seeing how it makes them so happy. Also our bread is something that people can come and get every day since it is cheap!”

Beatriz Porto tells the story of the legendary guava cheese strudel (aka “refugiado”) made at Glendale’s Porto’s Bakery. She learned the recipe from her mother, Rosa, who came to LA from Cuba in 1971 with the family and started out in Silverlake making cakes.

Marlene Beckford of Ackee Bamboo Jamaican Cuisine in Leimert Park describes the fry dumplings she learned how to make from her mother.

Amir Edward, chef and owner of The Original Hawowshi — gourmet Egyptian street food — brings the flavors and rustic taste of “aish baladi” (Egyptian flatbread) to LA, again with help from his grandmother.

Through bread, the message runs, we can honor our ancestors, nourish our current neighbors, and mentor the next generation.

I have several bread stories of my own. One is Bezian’s Bakery in East Hollywood, where for years when I lived in Koreatown I bought rustic breads and rolls: olive, fig, fennel. The store now sells mostly wholesale and at local farmer’s markets, but back in the 1990s a trip to Bezian’s was like entering an old world bazaar: dim lighting, narrow aisles, treasures like pistachio nuts and apricot paste.

Another is the Bread Lounge at Santa Fe and 7th downtown, founded by baker Ran Zimon in 2010. Made with wild yeast, its bread and pastries are chewy, fragrant, and rich. You can sit inside or out, or ferry your treat back to your car, dig in, and make a crumb-strewn, flaky, mess.

Everyone in the city has a bread memory and “Kneaded LA” invites us to share them: “Join the conversation by tagging @NHMLA with #KneadedLA, and your story could be featured next!”

Kudos to the Natural History Museum for this wonderful project that highlights the city at its best: a melting pot where we can bring the best of the families who formed us, work faithfully, and share our passion and gifts.

“In the most trying of times,” the site sums up, “bread brings people together.”