I don’t need to dog pile on CNN commentator Don Lemon for his recent remarks about Jesus; plenty of Protestant pastors have done that already.

In a strange exchange on his program, he told his CNN colleague Chris Cuomo that “Jesus Christ, if that’s who you believe in, Jesus Christ, admittedly was not perfect when he was here on this earth.” Mr. Lemon was setting up his argument that even if Jesus was “admittedly not perfect,” why oh why should we be deifying some founding fathers and be upset about toppling their images, whether they be in the form of stone, marble, or in our own hearts and minds.

I have no information whatsoever as to Lemon’s personal spiritual practices; it’s actually none of my business. And if he believes that Jesus was some kind of ahead-of-his-time life coach who said a lot of nice things, that is also his prerogative. The right to say and believe what we want does not come with a guarantee we must also be correct.

But before I let Lemon completely off the hook, it is nothing short of mind-boggling to contemplate how a professional broadcaster with the background and education Lemon obviously possesses does not know that those who have believed in Jesus for 2,000 years, and continue to worship him, hold that he was both God and man, and that, as a man, he remained sinless.

The real story to me was the silence coming from the other CNN reporter who was receiving the information from Lemon. Like Lemon, I have no idea what Cuomo believes or does not believe about Jesus. And like Lemon again, it is really none of my business. But I do know Cuomo’s late father Mario Cuomo was the governor of New York, and a very public and famous Catholic.

According to his official bio, Chris Cuomo got one of his multiple degrees from Fordham University, a fine Jesuit institution of higher learning that was founded in 1841 — maybe he heard about Jesus there once or twice. We can also assume his father’s very public catholicity had a private context too, and he learned about Jesus there. But he sat there like a deer in the headlights when his colleague Lemon put Jesus’ sandals in his mouth. 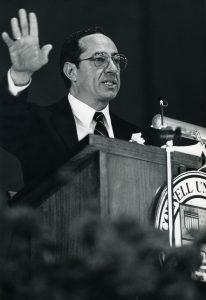 We can cut Cuomo some slack. If Lemon had said the earth was flat, Cuomo, or anyone for that matter, could have had the same dumbfounded reaction and not be able to find the words to counter the argument.

Hindsight has perfect vision, and maybe Cuomo’s silence can be traced to something his late father did in the public arena back in 1984. Gov. Cuomo gave a watershed speech at the University of Notre Dame. It has been providing cover for Catholic politicians who vote consistently for abortion anytime, anyplace, any reason, for decades. It was a great speech and Cuomo was a great orator — things in short supply these days.

But a well-written speech delivered by a master craftsman does not counterbalance error. Using rhetorical sleight of hand, pretzel logic, and straw men when needed, Cuomo had the Notre Dame faculty, students, and guests eating out of the palm of his hand, but what he was feeding them has come back up, so to speak, and it isn’t pretty.

Basically, Cuomo’s speech codified the “I am personally opposed to abortion, BUT” argument that has been cemented into every pro-abortion Catholic politician’s stump speech, right next to his or her love of hot dogs at Fourth of July parades. The premise championed in the speech, that one can publicly claim to adhere to the teachings of the Church while at the same time facilitate actions in direct opposition to those same teachings, can and has led to a lot of confusion and sorrow. It can also be applied to all manner of teachings, and people can just as easily wind up not being able to recognize the true nature of Jesus.

No one in that auditorium at Notre Dame in 1984 would have predicted the current state of affairs. And most probably nodded in agreement when Cuomo assured them all by saying, “So those who endorse legalized abortion aren’t a ruthless, callous alliance of anti-Christians determined to overthrow our moral standards.”

Well, 47 genders and counting later, abortion up to (and in some cases even after) the moment of birth, and the nuclear family in the bull’s-eye of the most powerful political movement in 2020, I think hindsight is telling us it’s time to be both personally opposed to abortion and publicly committed to life.

And how do I know this?  The man who was truly God, truly man, and sinless established a Church that informs me.