Harrowed: notes from an urban garden

“If you have a garden and a library, you have everything you need.” — Cicero, first century B.C.

Danish author Isak Dinesen had a farm in Africa at the foot of the Ngong Hills. I have a native plant garden in Pasadena.

Unlike Dinesen (“Out of Africa”), however, I don’t “own” my garden. It’s behind the Craftsman where I rent one of eight apartments.

I started it at the age of 64. I’m 67 now. The garden brings me satisfaction, beauty, astonishment, joy. The garden also requires an inordinate amount of worry and work.

When I started out, I thought simply to put my creative energy into arranging a bunch of plants. I didn’t know the garden would overtake my life.

I didn’t know the garden would help teach me how to order my day, pray, let go, love my neighbor, die.

It all started when I moved in around Christmas of 2015. The apartment is just my style: 1930s-era with alcove doorways, hardwood floors, and a west-facing balcony, now crammed with succulents and aloes, from which to watch the sun set.

I began to be bothered, however, by the more immediate view. The compound is huge, going beyond the parking lot to a vacant lot that extends the width of both our house and the house next door, also owned by our landlord.

The lot was overgrown and derelict, filled with half-buried spackling compound buckets, busted wheelbarrows, and rotting lawn chairs. Bit by bit that first winter, I began to clear. Bit by bit, the idea of a garden took hold.

I had never seriously gardened before. I took a half-day class at Theodore Payne Nursery in Sunland and my imagination caught fire. 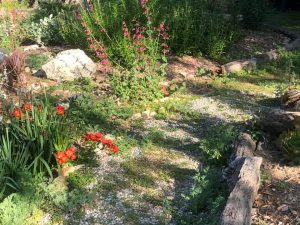 At that point we were still in a yearslong drought. So I hired my friend Jerry to prune, haul the stuff that was too heavy for me, and do a one-day rototill: the only time I have ever used a power tool of any kind in the garden.

He also beautifully laid the garden out with pea gravel-lined paths, a sitting area, and a couple of nicely shaped mounds.

I chose the plants, Jerry showed me how to install them in the fall of 2016, and since then I’ve been on my own.

I’m a New Englander at heart, trained since birth to make do with what’s at hand, apply old-fashioned elbow grease, and go my own way.

My tools, even now, consist of a shovel, a spade, a pair of clippers, a rake, gardening gloves, and a hose that has to be uncoiled and dragged.

I use no pesticides.

Several times a year I take advantage of the city of Pasadena’s free mulch program. At Jackie Robinson Park, I load the stuff into bins and recycled potting soil bags, haul them home in the back of my Fiat, unload, spread, and return a time or two more.

Caring for the garden is meditative: weeding, digging, clipping. I’ll say a rosary while I’m out there. Or I’ll think of all the people in the world who are suffering — in prison, being tortured, giving birth on a filthy pallet; hungry, hounded, lost — and dedicate my work, joy, and pain to them. Or I’ll simply fall silent, both interiorly and exteriorly, my entire being breathing thanks and praise.

The monks call this way of being “ora et labora” (“work and prayer”).

Many existential contradictions coalesce in the garden: activity versus contemplation, solitude versus community, noise versus quiet, the effort to love your neighbor while being driven crazy by your neighbor.

I myself crave quiet, for example. So I have never played music of any kind in the garden: partly so as not to disturb my neighbors; partly because the notion of quiet implies doing one thing at a time.

Each morning I save the gray water from my shower in a large bucket and haul it out to the garden. So it’s painful to watch parents from adjacent rentals allow their kids to turn on the spigot and use the precious water as a substance to play in for an hour.

Since day one, I have paid for the garden (except for water) and single-handedly maintained it. In return, my landlord has raised my rent every year, and now advertises his other apartments as having a “lushly landscaped backyard.” 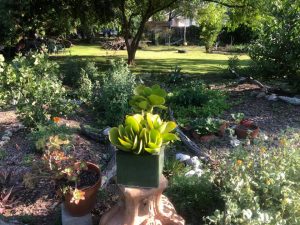 This used to bother me more. But the fact is, no one asked me to plant a garden. And in a world where everything is lent to us by God, the concept of ownership assumes its true proportions. We make a thing ours by loving it, and the more we love it, the more we are willing to disappear — to die — for it.

Never have I been more aware of the glory of the garden than during the current lockdown. People sit out there with their coffee and read, or enjoy a cocktail at dusk. Beleaguered parents bring their kids to run around and let off steam; neighbors have started their own plots of vegetables and flowers.

The Western scrub jay shoots down to nab a worm from a shovelful of freshly turned earth. A tiny white butterfly flickers in and out of the buckwheat. The bees drowse in the ceanothus.

The whole thing could be plowed under tomorrow, but the garden would endure, unto eternity.

That is Christ saying “I will be with you until the end of time.”

That is the promise of the Resurrection.