'Gem of the Ocean' aims for a soul-cleansing theatrical experience

Here’s how Pasadena’s A Noise Within Theater pitches its latest production:

Pulitzer Prize winner August Wilson unfolds the African American legacy in the first chronological episode of his celebrated “American Century Cycle,” a soaring, mystical tale of a man desperate for redemption in 1904 Pittsburgh.

Aunt Ester, a 285-year-old “soul cleanser,” sends him on a spiritual journey that dissects the nature of freedom amid oppression and spurs him to take up the mantle of justice.

“Two hundred and eighty-five?” was my first thought upon reading the description of “Gem of the Ocean.” “This could go either way.”

But as director Gregg T. Daniel observes, “Memory insists that we go back and claim the past.” And in fact, Veralyn Jones pulls off the part beautifully. With long, white braids, a floor-length patchwork style skirt and a neat weskit, she manages to be both the timeless repository of ancient wisdom and thoroughly of her place and era.

Her feet ache, as they would, but she’s put-together, practical, and while not suffering fools gladly, compassionate. She’s not woo-woo, she doesn’t have a schtick, she doesn’t make lame jokes and stage-wink about her age and her heaping powers. She’s not a stereotype, in other words.

The narrative unfolds four decades after the Civil War and Emancipation.

The scene is a Friday evening at 1839 Wylie Ave., Ester’s home in Pittsburgh’s Hill District. The set by Stephanie Kerley Schwartz is wonderful with high ceilings, an upper floor, wood moldings, and a big kitchen.

It’s the well-kept, lived-in home of a woman whose door, heart, and table are open. That door, during the course of the play, will prove a symbolic “portal between different times: past, present, and future.”

Wilson’s themes are sweeping: the aftereffects of slavery, the phenomena of freedom, betrayal, and redemption, the universal urge to lay down our lives for our friends.

Eli (Alex Morris) is Ester’s gatekeeper and peacekeeper. Solly Two Kings (Kevin Jackson), Eli’s best friend since they were both conductors on the Underground Railroad, is a frequent visitor. So is Rutherford Selig (Burt Emmett), an itinerant peddler.

Black Mary (Carolyn Ratteray) is Ester’s housekeeper and protégé. Caesar Wilks (Chuma Gault), Mary’s brother, is a landlord and local constable who worships the law, delights in lording it over those who lack his worldly power, including his black brethren, and feels thoroughly justified in having once killed a man for stealing a loaf of bread.

The action hinges on Citizen Barlow (a fine Evan Lewis Smith), a strong yet sensitive young man who has traveled north from Alabama looking for work and thirsting for Ester’s spiritual advice. 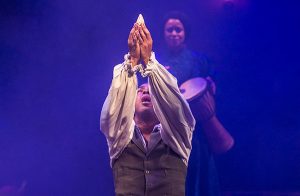 Evan Lewis Smith as Citizen Barlow in "Gem of the Ocean." (Craig Schwartz)

Meanwhile, tragedy has struck at the local mill. A worker named Garret Brown, accused by Caesar of stealing a bucket of nails, has jumped into the river and drowned.

In protest over Brown’s drowning, the workers strike, riot, and eventually set fire to the mill. As it burns, Barlow tells Ester of the dreadful secret he’s been carrying. She directs him to prepare for a trip to the mythic city of Bones, where she will affect the cleansing of his soul. Folding the bill of sale for which she was originally sold as a slave into a paper boat, she hands it to Barlow and begins leading him through the journey.

In a thrilling scene of theatrical sleight of hand, Barlow then undergoes a kind of victim-soul experience, suffering beside, along with, and for his brothers and sisters who he “sees” chained to the African slave boats bound for America. He meets and begs forgiveness from the man he has mortally wronged.

Eventually, he washes back up on the real-life shores of 1839 Wylie Ave. Arrests, jailings, a shooting, and a death follow. But by the end, Barlow is cleansed, made new, and prepared to accept the baton from Ester and make the fight for justice his life’s work.

The “Gem of the Ocean” elders are former slaves: vulnerable but not victims, outraged but not vengeful, sorrowful but not defeated, and deeply insightful: “[White people] never said they was gonna help us,” Eli observes. “They said the war was gonna help us. After that it be every man for himself.”

But the play’s real strength lies in its recognition that freedom can never be granted by any mere man-made law. True freedom, no matter how hideously we’ve been wronged, comes from within: a pure heart, a clean conscience. And those things cost.

“You got to tell [the man you’ve harmed], Mr. Citizen,” Ester urges. “Otherwise you’ll never be right with yourself. Peter denied Christ three times. You might not get lucky like Peter to have three chances. You got to tell him now.”

That’s soul cleansing at its best. Spurred by the play, I made a special trip the next week to the Cathedral of Our Lady of the Angels in downtown LA, where, in case you didn’t know, confession is offered Monday through Friday, before the noon Mass.

"Gem of the Ocean" is being performed at A Noise Within Theater in Pasadena until Nov. 16.