Francis certainly can be pope from a hospital bed ... but will he want to?

ROME — If anyone wonders whether Pope Francis has been impeded in his ability to do his job over the last week while recovering from colon surgery, at one level the answer is, “Obviously not.”

During that stretch, the pontiff, who was released from the hospital Tuesday morning, has appointed no fewer than 11 new bishops around the world, in addition to one relator general for an upcoming Synod of Bishops (Cardinal Jean-Claude Hollerich of Luxembourg, a fellow Jesuit). He’s also issued three sensitive messages: to the Syro-Malabar Church on their eucharistic liturgy, the nation of Haiti after the assassination of President Jovenel Moïse, and the leaders of South Sudan amid a new cycle of violence.

Granted, most of that activity is fairly routine and the pope probably wasn’t engaged, or even aware it was happening, until the very end, when he had to give his approval. (Though one of those new bishops came in Argentina, and it’s well-known that Pope Francis gets very personally involved indeed in those decisions.)

Pope Francis delivered an Angelus address on Sunday and has been filmed making the rounds of Rome’s Gemelli Hospital, chatting amiably with both medical staff and fellow patients. He also found time Sunday to congratulate both his native Argentina and his adopted home of Italy for winning their respective continental soccer championships.

In other words, it seems the pope is still the pope, even from a hospital bed.

In truth, that shouldn’t be any surprise. St. Pope John Paul II was in and out of Gemelli a robust 13 times over the course of his almost 27-year papacy, 10 times as a patient and three as a visitor, spending so much collective time there that the Polish pope even dubbed it “the third Vatican,” after St. Peter’s Square and the papal summer residence at Castel Gandolfo.

During those stays, John Paul remained very much the pope too. It was from the Gemelli in July 1981, for instance, that Pope John Paul named Józef Glemp to replace the legendary Cardinal Stefan Wyszyński of Warsaw, who had passed away just five days after the assassination attempt against the Polish pope on May 13. 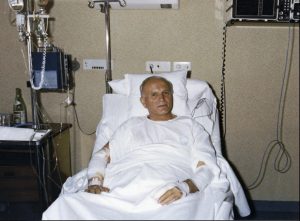 There’s no real job description for a pope, no set of minimal capacities he must possess or activities he must be able to perform. Even lying prone on a hospital bed, unable to speak and clearly unable to make executive decisions, a pope remains the spiritual father of the universal Church and the successor of Peter.

What may change as a pope ages and illness and fatigue begin to take their toll isn’t his ability to be pope, but the kind of pope he’s able to be.

We saw that clearly in the long, steady deterioration of Pope John Paul. During most of the 2000s, he became increasingly unable to move under his own power, to speak coherently, or to take the barnstorming trips that were so characteristic of the early stages of his papacy.

Yet he remained an enormously powerful symbol for Catholics and the whole word, in part because he taught the entire planet a lesson in dying with dignity and resolve – so much so that when Italians were asked after his death in 2005 whether they wanted the young Pope John Paul or the old on the official national stamp issued for the occasion, the old man in white won in a landslide.

It doesn’t seem we’re at that stage of things yet with Pope Francis, though it is striking that the two foreign trips he’s confirmed so far for the rest of the year — to Hungary and Slovakia in September, and to Scotland in November for the Cop26 climate summit in Glasgow — are nearby locations to Rome and of very brief duration.

In mid-August, when Italians take their traditional “ferragosto” holiday (also known as Assumption Day), Pope Francis will be exactly as old as Pope John Paul was when he died. That doesn’t mean a great deal, since Pope Francis isn’t suffering from Parkinson’s disease and he hasn’t carried the burden of the papacy for almost 27 years.

Nevertheless, it does beckon the thought that before long, we’re likely to see a more physically limited Pope Francis, one who appears in public for lesser stretches of time, who doesn’t travel as much and who’s more protected when he does, and who’s not as hands-on in the day-to-day administration of Church affairs as he’s been to this point.

The real question posed by Pope Francis’ recovery over the last few days, therefore, isn’t whether he can be pope from a hospital bed, or from the confines of his suite at the Domus Santa Marta while he gets the rest an elderly man obviously needs. Yes, he can, as others have before.

Instead, the question is whether Pope Francis will want to be that kind of pope, whether he’ll accept the steady limitations of age as part of the package, or whether, like Pope Emeritus Benedict XVI before him, he’ll decide at some point he no longer has the strength, or the will, to carry on.

As I said, we’re not there yet. But the scenes from the Gemelli Hospital over the last few days are a reminder, in the immortal words associated with King Canute the Great, that “time and the tides wait for no man,” not even, as it happens, a pope.