Food that says ‘I love you’

Erin French grew up in the small town of Freedom, Maine, working at her father’s diner. Pressing down grilled cheeses, arranging fries and tartar sauce on clam plates, spooning mashed potatoes and gravy around her father’s famous ketchup-cloaked meatloaf were second nature.

Her father was a hard-driving, hot-tempered alcoholic whose approval she craved and never quite got. But she loved the work anyway: loved the long hours, the jostling camaraderie of the kitchen, the look on people’s faces as they dug into a morning plate of eggs with bacon crisped just so, or a ham and bean lunch special, or a slab of prime rib with green beans for a special occasion dinner.

She never left her hometown where, in a converted hydro-powered grist mill, she now owns and operates a world-famous restaurant and foodie “destination” called The Lost Kitchen.

“Finding Freedom: A Cook’s Story Remaking a Life from Scratch” (Celadon Books, $10.65) is both a follow-up and a prequel to French’s first book, the recipe-focused “The Lost Kitchen” (Clarkson Potter, $28.49).

The backstory is a lot less airbrushed.

French wanted to be a doctor but, after starting medical school, she had to drop out for lack of money. In Maine, she catered, waitressed, tended bar. She had a son, took on single motherhood, and sold her own homemade baked goods door-to-door. She married a much older man, opened a supper club out of her apartment in nearby Belfast, then renovated an old storefront and launched a popular restaurant. She got hooked on pills and, at rehab, learned that her husband had locked the doors of the restaurant, fired the staff, and filed for custody of her son. 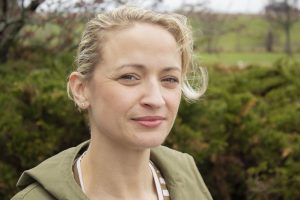 “Finding Freedom” is the story of how she picked herself up by the bootstraps, begged, borrowed, scavenged, refurbished an old Airstream trailer and opened a popup restaurant, made a handshake deal for that abandoned gristmill and bit by bit, breathed it into new life.

In fact, the whole Lost Kitchen staff (with the exception of the dishwasher) is female: not because French wanted to make a statement or dislikes men, but because women seemed to constellate around her. They grew the vegetables and herbs, gathered the scallops, and raised the chickens.

None of them, French included, are professionally trained. Her mother, Deanna Richardson, taught herself about wine and is now The Lost Kitchen’s sommelier. French forages native wildflowers, leaves, weeds, and tree branches to make her signature bouquets.

The whole ethos could hardly be more different than the bad-boy, foul-mouthed, drinking and drugging excess culturally enshrined as celebrity chefdom.

Not that French, who’s beautiful, smart, and ever-so-slightly vulnerable, isn’t also supremely media-savvy. Season three of “The Lost Kitchen Show” launched on Magnolia in October. The restaurant now has a brick-and-mortar retail store and does a brisk online business selling items like $150 snacking pedestals and handmade waxed canvas aprons ($175). You can now stay in a Lost Kitchen-style little black cabin, right by the restaurant, for $295 or so a night.

But French has resisted expanding much beyond her original 40 seats. The restaurant is open only eight months a year, four nights a week. There, in her central, open kitchen, she’s in her element, searing swordfish, grilling steaks, and plating rhubarb spoon cakes among her guests.

Her dream has always been to feed people good, simple food, and to make them feel as if they were in their own home.

“I wanted to make people feel nostalgic and loved. Nothing “sous-vide” [“under vacuum”], nothing frothed or foamed or forced or trying to be the best award-winning anything. It wasn’t cutting edge, it wasn’t sprinkled with gold flecks or garnished using tweezers. It was food that, with one bite, swaddled you, reminding you of your childhood, of someone you loved, and of the one, the few, or the many sweet moments they gave you.”

And the restaurant is wildly popular. The year after the phone lines crashed with new-season reservations, French instituted a lottery system. The tiny Freedom post office receives upward of 20,000 postcards each year from every corner of the globe, “all just for dinner.”

“The mystery of this place and its success still sometimes bewilders me. … Only one thing could explain it: love. We love our work because here, work feels joyful. … We are women, doing what we do best: caring for people.”

That’s a beautiful philosophy with which to enter into Thanksgiving — and it goes for the men who’ll be cooking that day, too.

“I found purpose and light through my darkest days by doing something that I love. I love so very much. I make mom food because I’m a mom, and as a girl I learned from my father that good food could be a vessel, a way to say ‘I love you’ without words.”