ROME — Great global shocks to the system inevitably produce massive and profoundly important consequences, most of which no one actually sees coming at the time.

The Black Death in the 14th century, for example, killed anywhere between 75 and 200 million people around the world, causing a protracted economic decline but also helping to shift power from landowners to workers due to depopulation and thereby contributing to the end of feudalism.

The Spanish flu epidemic of 1918 hit Europe harder than the United States, cutting real GDP by just 1.5% in the U.S., as opposed to 6-8% on the Old Continent, thereby helping set the stage for America’s Roaring ’20s and the “American Century” worldwide.

Granted that guessing right now how the COVID-19 pandemic will end up shaping history is a speculative enterprise, are there nonetheless a few seemingly safe bets we can identify as clues to the Catholic future?

Without straying too far into crystal-ball territory, five trajectories already in place before the pandemic clearly have been turbocharged by it, and they all have important implications for the Church.

Reaching those conclusions doesn’t require a Nostradamus, since the evidence already is fairly clear. Here is a thumbnail sketch of what each may mean for the Catholic Church. 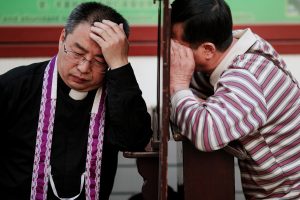 A priest hears confession at the Cathedral of the Immaculate Conception in Beijing. (CNS/Damir Sagoli/Reuters)

Despite the fact COVID was originally reported in Wuhan, China, by most accounts Asia has weathered the storm better than most. China recently boasted of being the only major global economy to post growth in 2020, and nations such as Japan, Taiwan, South Korea, Vietnam, and Cambodia have all won rave reviews for their broadly successful early action to contain the pandemic.

China has also skillfully exploited the COVID crisis to expand its global reach, ramping up industrial production to meet the demand of equipment-starved nations around the world, and offering humanitarian assistance and investment to developing nations rendered increasingly desperate by COVID-related shortfalls.

In a global order in which China is likely to be the single most dominant economic power, and in which Asia generally will be better positioned for an economic and political “relaunch” as the worst of the pandemic recedes, the Church’s ability to engage Asian societies will be crucial to its evangelical prospects.

One can’t accuse the Vatican of not seeing this coming. Its controversial deal with China over bishops is open to criticism on human rights and religious freedom grounds, but it has at least provided the Vatican with a small opening to be in conversation with Beijing.

Beyond China, the growing importance of Asia also will cast a spotlight on the Church in the Philippines, the only large Asian nation that’s majority Catholic, and also perhaps on South Korea, where Catholicism over recent decades has enjoyed a run of missionary success, and where its social influence is disproportionately high.

Forward-thinking Church leaders probably ought to be pondering ways to identify, groom, and position the next generation of clergy and lay leaders from those places, not simply for the health of their individual nations, but for the Church on the global stage. 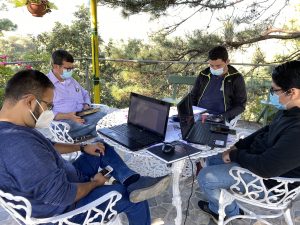 Father Manuel Acosta, in purple, prays with a group of seminarians in San Ignacio, El Salvador, as they operate the diocesan school online on Dec. 15. Following the pandemic, the school that trained lay leaders in the rural Diocese of Chalatenango began religious instruction online. (CNS/Rhina Guidos)

It’s anyone’s guess right now whether physical turnout at Catholic Masses will rebound to pre-COVID levels once all the restrictions are lifted and the obligation of Sunday attendance is reimposed. Some believe that the enforced eucharistic fast of the past year will stir a new hunger for the Mass, while others suspect the habit of staying home will be hard to break.

Even in a post-COVID world, however, it’s clear that certain forms of interaction likely have shifted to the digital realm for good.

For one thing, even when large-scale conferences are once again feasible from a public health point of view, costs and other logistics likely will drive many such gatherings online. More basically, however, a boom in working from home, which allows organizations to reduce expenses on physical plant and travel, will mean that a much wider range of ordinary human interaction will take place through digital platforms.

Catholic schools will be compelled to ramp up distance learning options. Parishes likely will find that a number of nonsacramental activities that used to be delivered in person as a matter of course — marriage preparation, for instance, or adult faith formation — are easier, less expensive and more effective online. Since people now are accustomed to making their financial transactions online, fundraising and giving increasingly will migrate to the clouds.

As Catholicism comes to rely ever more on digital technology, it will need to be careful that the same “digital divide” that afflicts society at large — in part between rich nations and poor ones, in part among different social strata in the same country — doesn’t characterize the Church’s internal life, too. That may mean creative efforts on the part of the Vatican and dioceses around the world to promote technology resource sharing. 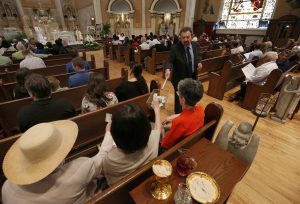 COVID-related shortfalls in revenue are already causing the Vatican’s annual deficit to balloon, and the same thing is occurring at lower levels in diocesan chanceries and parish offices around the world. While some adverse economic effects of the pandemic will ease as vaccine rollouts continue and the overall situation improves, there are at least a couple of reasons to believe that religious organizations won’t just return to pre-pandemic levels of income.

First, there will be permanent economic damage that leaves organizations and individuals with less disposable income, and thus less to give when the collection plate rolls around. Second, large-scale philanthropy going forward likely will be inclined to shift a greater share of resources to medical research, medical infrastructure, and readiness for the next pandemic, possibly implying a shift away from religious causes.

In the end, many Catholic enterprises likely will have to figure out ways to get by with less.

Church leaders trying to get on top of that trajectory right now might want to consider expanding human resources capacities, since parishes, chanceries, schools and social-service operations likely will have to trim payroll, meaning personnel left standing will be pressed to work smarter and more nimbly.

Training an existing employee to work more efficiently and effectively is a lot less expensive than adding a new one, so HR may be key to Catholic fortunes in the near-term future.

As the post-pandemic boom in digital technology unfolds, increasing sectors of the economy will come to rely more heavily on automation and AI. Over time that will reduce costs, but it also means increasing displacement of low-income, unskilled labor, which means more people will find themselves jobless and poor.

Catholic charities thus will experience greater demands for help, in a moment when they’re facing declining resources themselves.

Catholic leaders will be pressed to become ever more creative about ways to ensure support for the Church’s front-line charitable initiatives, perhaps finding ways to blend appeals for both time and treasure — asking ordinary Catholics who may not be in a position to give money to at least volunteer labor and expertise, in order to ensure that the Church’s traditional social safety net doesn’t develop new gaps. 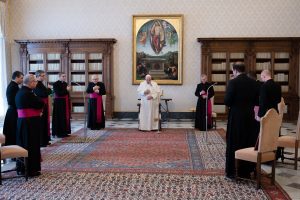 Pope Francis prays during his general audience in the library of the Apostolic Palace at the Vatican on March 17. (Vatican Media)

Recently two legal scholars in Australia, Stephen Thomson and Eric C. Ip, warned of an “impending authoritarian pandemic” as a result of a large-scale expansion of government power amid the COVID emergency, which, they concluded, is especially clear in three areas: restrictions on personal movement and assembly, surveillance, and health care ethics, especially the traditional right of informed consent to all treatment.

These trends, the authors concluded, have played out within authoritarian and semiauthoritarian states as well as liberal democracies.

For religious groups, where expanded government authority tends to be felt most keenly, is in restrictions on the right of free assembly for worship. In various parts of the world, courts have already been called upon to adjudicate disputes over restrictions on religious services imposed in the name of combating transmission of the disease, and it’s likely such tensions will flare up every time there’s a new outbreak of the coronavirus or any other deadly disease.

More broadly, the experience of effectively shutting down religious services on the basis of emergency powers may tempt governments in various parts of the world to encroach on religious freedom in other areas.

In the U.S., the Supreme Court of late has shown great deference to religious freedom claims. A new study in The Supreme Court Review finds that the court led by Chief Justice John G. Roberts Jr. has sided with religion in 81% of orally argued cases, up from just 46% under the Warren court in the 1950s and 1960s.

Whether that trend continues remains to be seen — worryingly, the same study found that religious freedom has now become a largely partisan issue in the U.S. — as does how similar disputes may play out in other parts of the world. 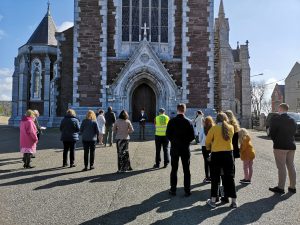 Catholics stand outside Sts. Anne and Mary Cathedral in Cork, Ireland, on April 4, praying that Bishop Fintan Gavin of Cork and Ross would open the doors for Easter Mass during the COVID-19 pandemic. (CNS/Cillian Kelly)

In any event, at the same time Church leaders will be pressed to adapt to a changing geopolitical order, to keep up with rapid technological change, to do more with less and to keep their charitable operations afloat, they may also find themselves spending an increasing share of time talking to lawyers and defending themselves in court.

In other words, the post-COVID era will be a challenging one for the Church … just like, one might argue, every other era that has preceded it, and every one that will follow it.