Finding a natural adrenaline in the wild

I’ve taken a long walk every day since lockdown, staying close to my Pasadena neighborhood. Last week, though, I had a dentist appointment in Glendale. And afterwards, I stopped at a place I’ve had in mind for months.

I entered the enchanted realm of the Deukmejian Wilderness Park.

“The Wilderness Park,” runs the official description, “occupies a rugged 709-acre site in the foothills of the San Gabriel Mountains at the northernmost extremity of the city of Glendale. The park is predominantly chaparral and sage scrub, but includes secluded streamside woodlands and scattered remnants of big-cone spruce woodland in Dunsmore and Cook’s Canyons. Trails on the site provide spectacular views of the Crescenta Valley and the Los Angeles basin.”

The Park Center includes the parking lot, the Glendale Park Ranger Station and the historic Le Mesnager Barn. George Le Mesnager was a French emigrant, LA entrepreneur and winegrower who built the beautiful stone barn, used as a stable and for grape storage, till Prohibition put the kibosh on the wine industry.

A 1933 fire, followed by rain-season flooding, culminated in construction of the adjacent dam and debris basin.

The Le Mesnager family then rebuilt the barn — a “vernacular rock” structure, meaning characterized by the use of local materials — and lived on site from 1937 to 1960. The area was purchased by the city of Glendale in 1988 and renamed the Deukmejian Wilderness Park, after former California Gov. George Deukmejian.

Bordered on three sides by the Angeles National Forest, the area ranges in elevation from around 2,200 feet to 4,775 feet in the northeast corner. 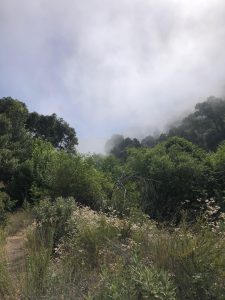 I didn’t see a brochure or map on-site, but I’d checked out a few of the trails online: the 6.3-mile Crescenta View Trail and the 3.3-mile Dunsmore Canyon and Le Mesnager Loop Trails. Both are rated moderate and offer birdwatching, wildflower viewing, and hiking. Dogs are allowed on leash.

Personally I was so profoundly thrilled to be walking “in nature” that I didn’t care what trail I took and simply struck out along the fence that curved east from the barn and kept going.

The morning was cool and the tops of the mountains were shrouded in mist. Blooms in various shades of ivory, pink, magenta, and gold made for a visual feast at every step. Here and there chaparral yuccas erupted in one of the tall, white-flowering spires colloquially known as our Lord’s candle.

Though I wasn’t planning to go terribly far off the beaten track, I briefly considered what to do if confronted by a bobcat. I could never remember: Are you supposed to stand up tall and wave your arms? Crouch? Bang two tin cans together? Brandish a crucifix? No, that was for grizzly bears.

I did not see any rattlers but I did come across a skinny black snake with yellow stripes taking the morning sun, who at my approach slithered with amazing speed backwards into his hole. This apparently was a California whipsnake (Masticophis lateralis), aka the striped racer, found in Golden State habitats of coast, desert, and foothill.

Around another bend I came upon a soft brown doe with three fawns. I stopped; she stopped. She raised her right foreleg as if considering taking flight, then lowered it, then delicately raised it again, while the fawns stood shyly and obediently behind her. Finally, they padded slowly off down the hill and I continued on. 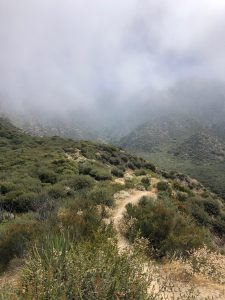 I walked as far as I could, through the sages and the grasses and the flowers and the smell of pearly everlasting, which has been variously described as resinous, piney, musky, curry, and a combination of cumin and lavender. To me pearly everlasting, an herbaceous perennial with heads of pellet-sized silvery flowers, smells like California. When my ex-husband and I first moved here from the East Coast it was one of the first plants I learned to recognize on our hikes in the Santa Monica Mountains.

Does anyone even read anymore? Films, music, travel books, memoir, poetry have sustained me all my life and even I’d been scouring Twitter — Twitter! — lately, desperately searching for someone who agreed with my concerns, my point of view.

I hadn’t come that far as the crow flies and on the way back reconnoitered a couple of tributary trails for future hikes, climbing higher for a better view. Down below a group of teens rhythmically whacked a branch against the trunk of another tree, yodeling and whooping.

I thought of the many people who must know every inch of these trails: fellow Angelenos who over the years had left behind little bits of their body and blood as they explored, observed, memorized, internalized, loved. That gave me hope.

Only when I was getting into my car did I realize that, since leaving the dentist’s office, I hadn’t looked at my phone once.