Alex Lee Moyer’s 2020 documentary “TFW No GF” — shorthand for “That feel when no girlfriend” — profiles several disaffected young men desperately searching to connect on the dark corners of the internet.

Though the film has its share of crude language, and a couple of violent images, its real subject is the souls of a generation of males who have been nursed, weaned, and raised in cyberspace.

What happens to young men when there are no role models, no authority figures, and no meaningful, flesh-and-blood human contact? And when at their fingertips they have a dopamine-hit-producing alternate reality that rewards the outrageous, the violent, the unhinged?

Two years after its release, the subject is as relevant as ever.

“The internet is like a river;” he adds. “It just does what it wants with you.”

Kyle, from El Paso, Texas, has had three friends commit suicide in the last couple of years. “I really have … nobody any more,” he realizes.

A pasty-skinned fellow named Egg White sucks on a cigarette and explains, “You’re trying to be someone and you’ve already lost, you’ve already failed.”

These are young men with no point, no purpose, no outlet for their testosterone, their procreative urge, their desire to prove themselves, belong, and do good in the world. 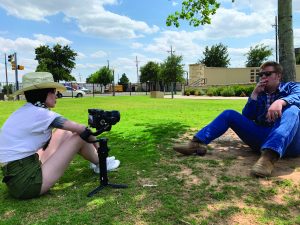 Alex Lee Moyer (left) during the making of “TFW No GF.” (IMDB)

Viddy from Kent, Washington, sports a ski cap, a badge on his jacket reading “Don’t Talk to Me” and a license plate bracketed by the slogans “I Want to Die” and “I Hate Myself.”

He and his buddy Charels more or less raised each other (“our parents are alcoholics,” Viddy explains) and own several guns, including assault weapons.

When Charels posted a selfie with two AK-47s and expressed a crude desire to do violence to women (he was only kidding, he maintained), the cops came and confiscated the pair’s weapons for a year.

Twitter and 4Chan trollers think, “Okay, what do people hate most?” Viddy offers. “And then they just become that, because it gets the reaction every time. Then some of them forget that they’re playing the character. Next thing you know, they end up at a place like Charlottesville.”

“Obviously there are people that are so disenfranchised, so alienated, so demonized in whatever way, that they feel like their only choice is to lash out in whatever way they can.”

“I’m not excusing that or anything,” he continues, “but, what, [gun massacres] happen for no reason? Do people, like, really think that?”

For all their solipsism, these young men are not self-pitying so much as they’re bewildered: by the state of the world, the culture, and the fact that as young males they’re unseen, unwanted, unremarked upon. As Sean points out, “People get angry if you say you have your own trials and tribulations as a guy.”

Interestingly, their (supposedly ironic) response is a kind of reverse machismo: like St. Paul, they boast of their weakness. None of them refer to themselves as “incels” (a portmanteau of “involuntary celibate”), a group comprising another dark, rage-fueled corner of the internet.

But that they’re so willing to mention their inability to attract and keep a woman, to draw attention to their station in life, and even to define themselves by it shows the depths of their longing and emptiness.

Viddy: “I don’t want to blame my parents but it’s really hard for a kid to have interests and not, like, have anybody be a caretaker sort of figure that will express interest in what you’re into. It’s the elephant in the room, right? The failings of the broader educational system and just general authority figures in people’s lives, specifically children’s lives.”

We human beings need someone to see us, just as Jesus “saw” Philip under the fig tree. That used to be the province of a unit called the family. Moyer — who’s female — has seen these young men, and for that alone, she deserves kudos.

Last month she launched another film: “Alex’s War,” a profile of Infowars fabulist Alex Jones. As with “TFW No GF,” she presents the subject with no commentary, inviting viewers to judge for themselves.

Predictably, she’s been skewered by the woke left. And though to my mind Jones is way less compelling a subject than the 4Chan guys, the mere attempt to portray figures who are so neatly stereotyped and deeply reviled by the mainstream media deserves kudos as well.

For all its darkness, the film ends on a note of hope. People are away from their screens. Kyle’s walking along a reservoir. Charels and Viddy are hanging out beneath a bridge. Sean is employed, has taken up powerlifting, and sits gazing out at the ocean.

“It’s a full-time job to fight the effects of modernity,” he observes.

Amen. You want to say to these guys: Take everything you have learned about supporting your brothers, about sharing your pain, your irony, your jokes, your loneliness and alienation, and pent-up energy, and bring that out to the world.

Because the world needs you — now more than ever.

Or as someone else put it, “Lift up your heads; your redemption is at hand.”