“We draw people to Christ not by loudly discrediting what they believe, by telling them how wrong they are and how right we are, but by showing them a light that is so lovely that they want with all their hearts to know the source of it.” — Madeleine L’Engle, author of “A Wrinkle in Time”

My friend Tensie Hernandez helps run a Catholic Worker house up on the Central Coast. Last week she told me about one of the women she treats at their free clinic.

Fabiola is married to Nano. Their oldest child, Evelyn, 26, was born with cerebral palsy. She’s blind and mute. She has a tracheotomy and a feeding tube. 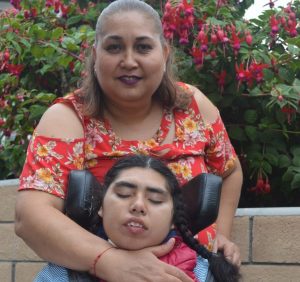 For all of Evelyn’s life, Fabiola has risen twice, in the middle of the night, to turn her so that she won’t get bedsores. “Twice on a good night,” Tensie adds. “That’s assuming Evelyn’s not sick, or that one of her tubes hasn’t clogged and she’s breathing OK.”

Recently Fabiola came to Tensie with a story: “Doña, the funniest thing happened the other night!”

Turns out Fabiola had gotten up at 2 a.m. as usual to turn Evelyn, bumped into something, and drawn back, startled. Unbeknownst to Fabiola, Nano had also gotten up to turn Evelyn! They met over her bed, in the dark. The two of them cracked up laughing.

After years of working in the fields, Nano now drives a delivery truck for a large chain store. And Fabiola, does she work? “Oh no. Caring for Evelyn is a full-time job. That’s her life.”

After Evelyn, Fabiola and Nano had two able-bodied sons, now teenagers, of whom they couldn’t be more proud. Fabiola adores them, too, of course, but her mothering is no-nonsense. “I love you all,” she tells them, “but Evelyn is our priority.”

What’s really incredible, Tensie adds, is that Fabiola is always in a good mood. “Ya llego la alegria, I tell her. ‘Here comes happiness.’ Seriously, she is chronically joyful. Always happy to see me, always grateful. Always up for a chat.”

Every couple of years, Evelyn lands in the hospital. It’s usually fairly dire.

“Last time I visited Fabiola had Mass running on the TV. Evelyn looked pretty bad. She’s lying there, not moving. And Fabi’s going: ‘You watch, Evelyn, the pope is gonna pray for us! Don’t you worry, we’re going to beat this thing. And now Hortensia is here to pray, too! Everything’s OK! You’re going to get better!”

“I couldn’t tell,” Tensie said. “But I have not a doubt in the world that in the deepest part of her soul Evelyn was happy. She knows, every minute of every day, that she is loved.”

Afterward, I couldn’t get the image of Fabiola and Evelyn — this modern-day Madonna and child — out of my mind.

We’ve heard a lot about freedom these past weeks, but the only real freedom, it seems to me, is the freedom to do good. That is a freedom that can neither be granted, nor revoked, by any government, political body, or man-made law.

Viktor Frankl, author of the classic “Man’s Search for Meaning” (Beacon Press, $15), learned to exercise that freedom in the Nazi death camps when he discovered that in the face of torture and starvation he could choose his attitude.

Christ exercised that freedom on the cross, when at the mercy of his executioners, the high priests of Jewish law, and the entire Roman government, he said, “Forgive them, Father, for they know not what they do.”

Fabiola, rising twice each night to turn her child, is one example of the freedom to do good; to love one another as Christ loved us, in action. To be for life, that example demonstrates, is not reducible to a slogan, a badge, a vote.

To be for all of life is a martyrdom that would not dream of proclaiming itself; that has built into it a hiddenness, a humility on the opposite end of the spectrum from our cultural notions of victory, worldly power, political clout, and pride.

Such a life is impervious to commodification, marketing, lobbying efforts. It simply is. You can do with it what you will; think of it what you want.

You can say, That’s a life of unalloyed suffering and labor. OK — but how do you explain away the strange happiness, the joy?

You can say, But no one should be forced into such a life. OK. The fact remains that someone freely chose it.

You don’t have to respond to that fact. But to fail to respond, to refuse to ponder a life like Fabiola’s — and a life like Evelyn’s — is to deny the deepest questions of human existence.

“I AM,” Christ said (John 8:58). And if he is not there, night after night, as Fabiola and Nano watch over Evelyn, I don’t know where else he would be.

In the dark, a man and a woman joined by marriage meet to turn their grown daughter’s wasted body. That is a place a world away from the chambers of the Supreme Court, a voting booth, a march. That is a place on a par with the confessional, the last rites, the gate where the sheep will be separated from the goats.

That is consecrated time and space, beyond the kingdom of this world.

It is a light so bright that I, for one, want with all my heart to know the source of it.