‘Encanto’ proves a kids movie can thrive without identity politics

Earlier this month, we screwed up our courage and took our youngest children to see the new Disney movie “Encanto” (“Charm” or “Enchantment” in Spanish). I use the word “courage” because watching a children’s movie these days can be an act of bravery.

Too often, we’ve felt a terrible disappointment when a movie that ought to speak to us of clean, childlike joys turns out to be just another vehicle for the advancement of whatever the latest, not-so-clean social fad might be.

I’m happy to report that “Encanto” is, in fact, enchanting.

Yes, my family is naturally inclined to enjoy the film’s rhythms of bachata, salsa, and merengue strained through the fine artistry of Lin Manuel Miranda, who composed much of the score. But the movie is much more than visually and aurally compelling — it is a paean to the indispensable virtues found in every happy family: unity, self-sacrifice, and the cheerfulness of self-forgetfulness even amid difficulties. Notably, with a cast of characters of every race, “Encanto,” which is set in Colombia, does not fall into the ugly politics of identity that colors so much of our culture. Instead, it is quite consciously colorblind.

Without giving too much away, “Encanto” is about an extended family — “la Familia Madrigal” (“The Madrigal Family”) — led by a strong and noble woman, the classic “abuela” (“grandma”) of Hispanic lore. Widowed long ago by an act of political violence and left to forge a new life with her triplet babies, she is granted a miracle: an enchanted house in a magically secluded and protected corner of Colombia.

Her family grows through marriages and the birth of children, tightly knit and with each member endowed with a supernatural ability. One aunt can hear everything with perfect clarity, another makes food that cures ailments, and a third has superhuman strength. One uncle can predict the future, which becomes a source of woe.

But for the most part, they use their gifts only for the good of the villagers in their protected valley. The magical house and the happy family that dwell in it are the mainstay of the whole community, including the good priest who has not been left out of the colorful narrative.

The drama centers around one Madrigal girl whose special power has not arrived when expected, and her desire to nevertheless serve as the rest of the family does. As in so many Disney classics, here we have a girl trembling on the threshold of womanhood, eager to pull back the veil on the mystery of her own life.

However, unlike the characters in those films, she is not trying to find her individual path while flying in the face of family expectations. She is feeling for the best way to do her duty, which, for a Madrigal, is the duty to protect the villagers and preserve her family’s unity. What a breath of clean fresh air!

In this and other ways “Encanto” sang pure music to our hearts.

The enchanted house itself, we decided on the way home, is a symbol of the way a loving home is a child’s magical refuge in a hard world that is too often experienced as traumatic. That is the way, for instance, that I experienced my own stable and affectionate home, growing up while moving from place to place in the years after my parents’ exile from Cuba: Give a glad home-refuge to a child, and the storms that blow outside that sturdy structure can be survived and forgotten. 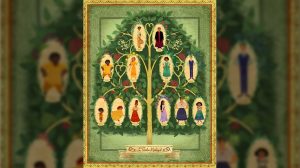 The film’s ode to transgenerational living also resonated with us. We recognized the delight of the rapid-fire collisions of heart with heart in a family life that nests each person in a multitude of relationships, where loneliness is difficult to imagine. “Encanto” shows, in beautiful color and song, the loveliness of connectedness and mutual support in which freedom, when it comes, is not the individualist’s sterile liberty to pursue one’s own passions, but the freedom to run toward the good of others with an energetic bound.

Adding to all this charm is the pretty diversity of the characters. As in our own Hispanic families, here is a group of people representing in the color of their skin, the curl of their hair, and the shapes of their noses the long genetic strands that tie us to our forefathers from different parts of the world.

It is lovely to see the racial blends presented as we ourselves experience them: delightful variations in the endless creativity of God who makes each of his sons and daughters uniquely and out of love and one by one. The idea of separating people into opposing groups — often on purpose to stoke grievances that are then used to advance some political cause or another — is a foreign one in the world of “Encanto.”

I don’t know if Disney made a conscious decision with this film to return to a less ferociously polarized time, when individualism wasn’t exalted over the relationships that nourish us, when freedom was a gift to be won and used for noble purposes, when differences in skin tone were less than skin deep. If there was such a decision, Disney deserves congratulations. If it was a matter of chance I would say there is no such thing: Only the spirit of truth and goodness making his colors shine and his songs resound.