Elon Musk made only a minor blip on the news cycle radar screen recently when he declared his planned settlement on Mars will not adhere to international law, but I think it deserved more attention.

It appears that Musk’s vision of his brave new universe plans to establish a new kind of civilization, based on whatever the new settlers agree on. The sledgehammer implication is that the Martian entourage will leave objective constructs of universal truths earthbound.

If this sounds like you have heard this kind of thing before, then you were paying attention in history class. There’s a good reason you only find Utopias in between the covers of books. When they have been tested in real time, by real people, things never ever go as planned.

When the pilgrims landed in the New World, they brought a Utopian view to their settlement, and they almost perished that first winter. They quickly readjusted, became slightly less woke and more individualistic, and the rest is history.

There were no official statements on what precepts the Martian colony may take, but they referenced the Earth Light Foundation. When you survey the website of this organization, you are inclined to have a preconceived idea of what you’ll find. And sometimes those preconceptions are prophetic. 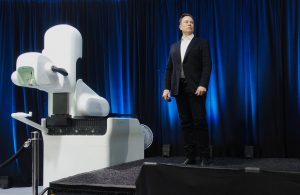 The foundation’s site contains a lot of idealized bromides about establishing a human presence on previously uninhabited galaxies where, with plenty of love and respect for any sentient beings found there — to wish that sentient beings floating in amniotic fluid on spaceship Earth were offered the same deal. But I digress.

Thinking I’d find a Gospel message here was certainly not in the cards, but when they made their bold spiritual declaration of beliefs, I drew a line with my quill.

The Earth Light Foundation states: “No matter the headlines, we believe human beings are basically good, and given the chance can be even better.”

That’s a nice sentiment, but that is all it is.

If human beings are basically good, then original sin is some kind of performance art, and the suffering, death, and resurrection of the God/man is irrelevant. Accepting that we are all broken vessels in need of repair is a long way from theological dead ends like the concept of total depravity, but to believe I’m OK and you’re OK and that’s it, is also not to be found in the Gospels. This is the kind of thinking that is going to prove problematical on the surface of Mars in the not-too-distant future.

Speaking of Mars, in the early 1990s, as a member in good standing of the Writers Guild of America, I had the privilege to walk a picket line as we television writers went on strike to get a bigger piece of the economic pie. I didn’t fully understand why we were not working, but the loyal union man I was, the pavement did I hit.

I say privilege because one day, outside the Fox Studios, I was on the sidewalk carrying my righteous sign, and all of a sudden I was joined by the extraordinary science-fiction writer Ray Bradbury, a boyhood idol of mine and writer of the essential Martian sci-fi book “The Martian Chronicles.”

Remembering the advice that we should never meet our idols, and also not wanting to sound like the fanboy I was, we walked several minutes without saying much. Then Bradbury engaged me. The flood gates opened. We talked about writing, about all kinds of things. He was wonderful, and I have always cherished that moment in time.

There was another topic discussed that wonderful day that came rushing back to me as I contemplated Elon Musk and his quest for Mars. I asked Ray Bradbury if he thought there actually was life on Mars. He answered immediately: Yes. He let me stew on that for a minute like any good writer teasing his audience, and then hit me with the punchline — it was us.

He referenced the Viking space probe which had landed on the Martian surface in the 1970s. To him, that probe was an extension of the human quest for knowledge and indeed represented “life” on Mars.

I wish I had thought of that line. I wish I could write like Ray Bradbury.

And I hope Elon Musk and his Mars colonizers realize the hubris of thinking human beings are fine just the way they are, without any supernatural communion. No matter how far they remove themselves from terra firma, they will always take their broken human natures with them, but the remedy is just one eternity away.